Almost three months after the

Almost three months after the brutal murder of controversial Dutch filmmaker Theo van Gogh, an Amsterdam court will on Wednesday hold the first procedural hearing in the case against his alleged killer Mohammed Bouyeri, whom the prosecution says is a Muslim extremist. Bouyeri is charged with murder, attempted murder and membership of a terrorist organisation.After […]

The retired four-star Army general who was sent to Iraq two weeks ago to assess operations there has concluded that American troops must speed up and strengthen the training of Iraqi security forces, by assigning thousands of additional military advisers to work directly with Iraqi units, said senior defense and military officials here and in […]

A shiver in the Force

Russia held the last governor’s election on Sunday before reforms introduced by President Vladimir Putin give the Kremlin the power to nominate the heads of regional governments. Voters in the northern Nenets autonomous region cast ballots to choose their governor from 15 candidates in the kind of direct election that has been viewed as a […]

A group led by al

A group led by al Qaeda ally Abu Musab al-Zarqawi beheaded two Iraqis who said they worked at a U.S. base in Iraq and the group posted an Internet video of the killings on Friday. The tape showed two men, who identified themselves as Ali Hussein Jassem Mohammad al-Zubaidi and Ahmad Alwan Hussein al-Mahmadawi, standing […]

Up to 1,000 members of the Palestinian security forces were moving into the northern Gaza Strip yesterday after an agreement was reached with Israel, raising hopes of long-term co-operation between the two sides. The force, which will later rise to 2,500, will take over cities and towns in the territory and occupy positions close to […]

JUST TWO DAYS after the

JUST TWO DAYS after the Palestinian presidential election, in which multiple candidates freely competed for votes, an Egyptian official delivered a contrasting piece of news: The ruling party, he said, intended to nominate President Hosni Mubarak to run unopposed this fall for a sixth consecutive term. If confirmed, that would mean the perpetuation of the […]

A leading Dutch Muslim politician [Ayaan Hirsi Ali], who received death threats after criticising Islamic attitudes to women, took her seat in parliament again yesterday after more than two months in hiding. (…) She said yesterday she intended to publish a second volume of her controversial book Submission, which was the basis of the film. […] 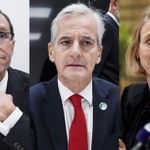 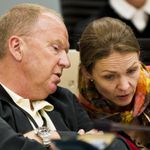