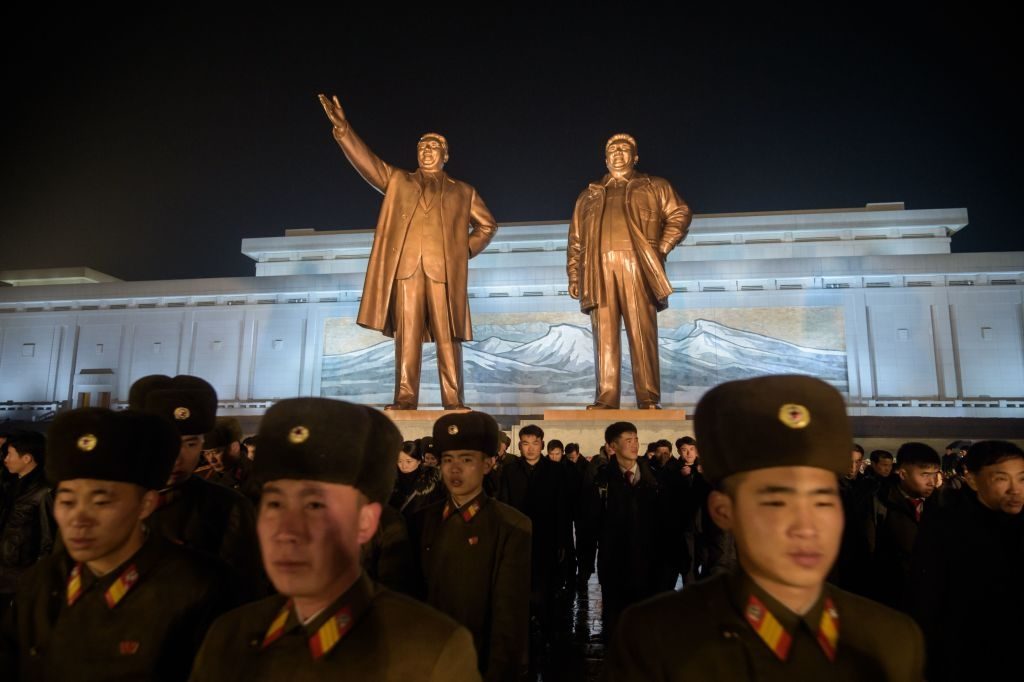 In a photo taken on December 16, 2019 Korean People’s Army (KPA) soldiers leave after paying their respects before a statue of North Korean leader Kim Jong Il, on the anniversary of his death, at Mansu Hill in Pyongyang. (Photo by KIM Won Jin / AFP) (Photo by KIM WON JIN/AFP via Getty Images)

The global persecution of Christians has reached unprecedented levels: «260 million Christians experience high levels of persecution» around the world, notes the recently published Open Doors World Watch List 2020, an annual report that ranks the top 50 countries where Christians are most persecuted for their faith.

Additionally, «2,983 Christians were killed for faith-related reasons. On average, that’s 8 Christians killed every day for their faith»: «9,488 churches or Christian buildings were attacked,» and «3,711 Christians were detained without trial, arrested, sentenced and imprisoned.» (Note: All quotes in this article are from the World Watch List 2020 report.)

Dictatorial paranoia continues to make North Korea (#1) the worst nation. «If North Korean Christians are discovered, they are deported to labor camps as political criminals or even killed on the spot.»

Otherwise, and as has been the case in all statistics and reports on the global persecution of Christians, not only does «Islamic oppression» remain the chief «source of persecution» faced by Christians in seven of the absolute ten worst nations, but 38 of the 50 nations composing the list are either Muslim-majority or have a sizeable Muslim population.

The overwhelming majority of these Muslim nations are governed by some form of shari’a (Islamic law). It is either directly enforced by government or society or, more frequently, both, though societies — family members in particular — tend to be more zealous in its application. Brief summaries of the seven Muslim nations making the top ten follow:

Some notable trends are also on the rise. Christians in sub-Saharan Africa are «increasingly under threat from Islamic extremist groups»:

In Burkina Faso (No. 28, a rise of 33 spots from 2019), long-known for its religious tolerance, Christians say they are in a fight for survival. Dozens of Catholic priests have been killed, and Protestant pastors and their families have been killed or kidnapped by violent Islamic militants. In Mali (No. 29), the president said in late 2018 that his country’s existence is under threat because of Islamic jihadists. Central African Republic (No. 25) is in constant upheaval partially due to the fighting of rebel Islamic militants, many of whom target Christians. And Cameroon (No. 48) faces violence in the north—still a stronghold of Boko Haram [which, along with Muslim Fulani herdsmen, are slaughtering Christians in Nigeria, #12].

Militant Islam has also arisen in unexpected areas. «In Sri Lanka (No. 30, up from 46 in 2019) 250 people died and more than 500 were injured in attacks on Catholic and Protestant churches and hotels on Easter Sunday.» Maldives (#14)—popularly recognized as a beautiful island nation and tourist destination—is a bastion of shari’a:

The Maldives’ constitution requires all citizens to be Muslim. Conversion from Islam means that someone can be stripped of their citizenship and punished under Shariah law. Even foreign workers who are Christians are closely watched, which makes church life extremely difficult and practically non-existent. Churches are outlawed, and openly carrying the Bible is illegal. The country is so tightly controlled by Islamic law that there is not even a Bible fully translated into the native language of most citizens of the Maldives.

Algeria worsened by five sports — going from #22 last year to #17 in 2020 — due to «the seemingly systemic closure of Protestant churches. In some of these cases, Christians were forcibly expelled by police in the middle of church services. Pressure from family also remains high, particularly for Christians who were previously Muslim.»

Aside from «Islamic oppression,» the targeting of Christians around the world has become more widespread than ever. Part of this is because «persecution against Christians has taken a technological turn.» For example, in India (#10) — where «Hindu radicals often attack Christians with little to no consequences» — «the government plans to introduce a national facial recognition system. There were at least 447 verified incidents of violence and hate crimes against Christians in India… There is fear that more tracking could increase these attacks.»

Similarly, China (#23) — which seeks to make all religions, including Christianity, «fall in line with their interpretation of communism» — is «rolling out a country-wide Social Credit System (SCS) by which authorities plan to reward ‘good’ citizenship and punish ‘bad'»:

Already, one community has reportedly decided to add penalties for those who «illegally spread Christianity.» It’s easy to see how surveillance technology could be used in tandem with the SCS to make everyday life very difficult for anyone the Chinese government deems insufficiently «Chinese» — including Christians.

Will this trend ever stop and reverse, or will it continue to get worse — and possibly even spill into those nations that, for now, enjoy religious freedom and equality?

Raymond Ibrahim, author of the new book, Sword and Scimitar, Fourteen Centuries of War between Islam and the West, is a Distinguished Senior Fellow at the Gatestone Institute, a Shillman Fellow at the David Horowitz Freedom Center, and a Judith Rosen Friedman Fellow at the Middle East Forum.

A Global Catastrophe: «260 Million Christians Experience High Levels of Persecution»
by Raymond Ibrahim
February 2, 2020 at 5:00 am