Terror Attacks in France: A Culture of Denial 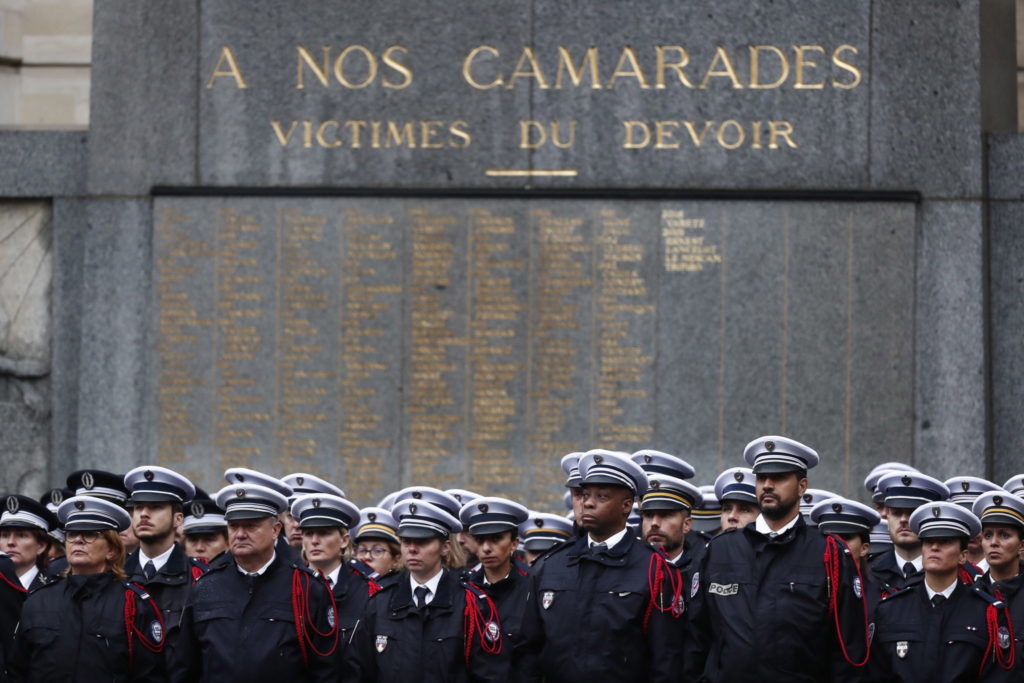 epa07904986 French Police officers stand in front of coffins during a ceremony to pay tribute to the victims of the 03 October knife attack in Paris’ Police headquarters, in Paris, France, 08 October 2019. Four officers were killed in a knife attack by Police employee Mickael Harpon on 03 October. EPA/IAN LANGSDON

On October 3, 2019, a knife-wielding Muslim employee of the Paris Police Department Intelligence Directorate stabbed to death four other employees at police headquarters in the center of Paris, before a trainee police officer shot and killed him. While it was not the deadliest terror attack France has experienced in recent years, the fatal stabbings that took place at the Paris police headquarters were perhaps the most worrisome. Its author (a French public servant employed by the police), its highly sensitive target, and the catastrophic handling of the aftermath of the attack reveal the failure of the French institutions.

As it was the case for all recent terror attacks, French media and authorities first tried to downplay what happened. The attacker was initially described through potentially mitigating factors, such as his handicap (the killer is partly deaf and mute). It took 24 hours before it was eventually revealed that he was an Islamist militant who had carefully planned his attack.

That a radicalized militant had been able to remain undetected in a critical security institution for years sent shockwaves throughout the country. Members of the parliamentary opposition asked for the resignation of Home Affairs Minister Christophe Castaner, who at first had said that the attacker «had never shown any warning signs or behavioral difficulties.»

For the record, this «very normal behavior» included cutting down to a bare minimum communication with women (he had for months being avoiding all women but his wife), attending a notoriously radical mosque, and having a phone full of Islamist contacts. His colleagues reported that already in January 2015, he had cheered the murderous Islamist terror attack on the satirical magazine Charlie Hebdo in front of other police employees. In many countries, a mistake of this scale would be enough for a government minister to resign, but not in France.

The whole picture of the attack, which is still not clear, demonstrates an incredible failure of internal control inside the French police. The French Parliament is now asking how the murderer managed to fly under the radar when everything in his behavior clearly signaled an increasing radicalization.

Notably, this is the first time that the French state and its institutions were directly targeted. Also for the first time, the victims were not journalists (as was the case for the Charlie Hebdo attacks in January 2015), Jews (who have been targeted several times in recent years) or civilians (such as the massive coordinated attacks in Paris on November 2015 that caused more than 131 deaths and 413 wounded).

This latest attack also demonstrates how inadequately prepared France is to tackle the problem. The killer was not just any civil servant: his security clearance allowed him to have access to sensitive files such as the personal details of police officers and individuals monitored by the department, including several individuals suspected of terrorism.

After Charlie Hebdo, the Bataclan in Paris, the truck-ramming massacre in Nice, and countless other attacks, French institutions have failed repeatedly. However, instead of recognizing this failure and assuming a share of responsibility, instead of hitting the problem of religious radicalization head-on, French President Emmanuel Macron regularly describes it as a «societal problem,» that «institutions alone will not be able to solve.» It is necessary first to recognize and name a problem in order to tackle it. In the current state of affairs, French political institutions are a long way from success in the fight against terrorism.

Beyond the political sphere, there is also a culture a denial of the Islamist threat in the French media. Journalists, academics and politicians, with a few exceptions, have consistently played down not only the risk of terrorist attacks but also the threat of growing Salafist radicalization in the country. A growing number of Muslims, while not advocating the use of violence, desire to live under Sharia law, separate from the rest of French society.

According to a study by the Montaigne Institute, 29% of Muslims in France believe that Sharia law is more important than French law. This means that almost one-third of French Muslims live according to values that are fundamentally incompatible with French or Western standards.

Although France is the European country most targeted by Islamists (263 killed since 2012), politicians are paralyzed by the fear of being accused by the mainstream media of discrimination against Muslims, of creating an amalgam between terrorists and Muslims or of «fueling tensions.» Senior figures acknowledge a major problem only when they are no longer in charge. In a book published after he stepped down, the socialist former president François Hollande wrote:

«Islam? Yes, there is indeed a problem with Islam. Nobody doubts this. The Islamic veil is a form of enslavement. We cannot continue welcoming migrants without any form of control in the context of increased terror attacks.»

Hollande never would have said such a thing when he was president. Like others, he sheepishly ignored the problem.

The same happened with Christophe Castaner’s predecessor, Gerard Collomb, after he resigned as Interior Minister. He warned against no less than the risk of civil war in France.

«In some suburbs (…) it is the rule of the strongest, of drug dealers and radical Islamists that prevails instead of the laws of the Republic… Today we live side by side, next to each other, but tomorrow, I fear that we might end up facing each other.»

It is important to note that theses quotes are not from right-wing thinkers or activists. Both François Hollande and Gerard Collomb were long-time eminent figures of the Socialist Party.

These are typical examples of what some call «la démission des élites» (the abdication of the elites): refusing to act on a situation of which they are perfectly aware but afraid to mention because of the dominant ideology of political correctness.

In the meantime, France’s police officers are increasingly unmotivated and demoralized. Since the start of the year, more than 50 police officers have committed suicide. They face increasingly difficult working conditions, in particular, rioters in the suburbs of cities like Paris, Marseille, Lille or Lyon — suburbs that are progressively escaping the control of the French authorities.

Attack after attack, the ritual is the same. There are flowers, tributes and words for the victims, political leaders affirm their resolve to act to protect the people. But after a few days, the news cycle ends and things go back to normal — until the next terrorist attack.

Alain Destexhe, an honorary Senator in Belgium, was awarded the Prize of Liberty by Nova Civitas in 2006.