Oliver Stone’s Response to Being Laughed at for Defending Putin: Blame the Jews 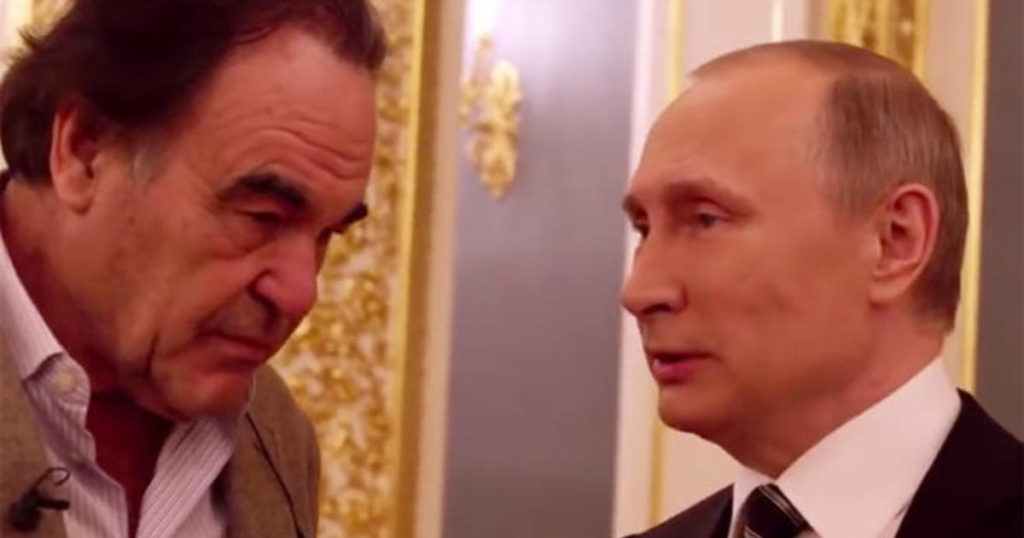 When film director Oliver Stone could not come up with a plausible response to Stephen Colbert’s tough questions about why he gave a pass to Vladimir Putin for trying to influence the American presidential election, Stone resorted to an age-old bigotry: blame the Jews – or, in its current incarnation, shift the blame to the nation state of the Jewish people, Israel. Colbert was interviewing Stone about his new documentary, «The Putin Interviews» – a film comprised of conversations he had with the Russian president over the past two years. The exchange regarding Israel did not make it to air but was relayed to the New York Post’s Page Six by a source who was in the audience.

When pressed by Colbert about his apparent fondness of the Russian dictator, Stone replied: «Israel had far more involvement in the U.S. election than Russia.» He then said again, «Why don’t you ask me about that?» Colbert responded: «I’ll ask you about that when you make a documentary about Israel!»

If Stone’s absurd response were not reflective of a growing anti-Semitism by the intolerant hard left (of which Stone is a charter member) it would be laughable. Indeed, Stone resorted to the «socialism of fools» (which is what German Social Democrat, August Bebel, coined anti-Semitism) precisely to save face because he was being mockingly laughed off stage by Colbert’s audience for giving Colbert ridiculous answers. Some of Stone’s bizarre pronouncements included:

«I’m amazed at his [Putin’s] calmness, his courtesy…he never really said anything bad about anybody. He’s been through a lot. He’s been insulted and abused.» Stone also expressed his «respect» for Putin’s leadership. But no answer was more ridiculous than his bigoted claim that Israel did more to try to influence the election than Russia.

We know for certain that Russia (and that means Putin) desperately wanted Hillary Clinton to lose. We know that their surrogates timed leaks to cause maximum damage to her campaign. All of our intelligence agencies, in a rare show of unanimity, concluded that Russia went to great lengths to try to defeat Clinton.

What did Israel do? Stone hasn’t said. He just let the blood libel hang out there for other bigots, so they could say, «See, we knew the Jews were behind this; they always are.» There was an old Polish expression that said: if there is a bad outcome, the Jews must be behind it. Indeed, throughout history the last recourse of desperate bigots has been ‘blame the Jews.’ The modern version – pervasive among the hard left– is blame their nation-state, Israel.

The reason Stone did not provide any proof of his anti-Semitic accusation is because there is none. It simply is not true. Israel did not try to influence this election. The Israeli government took no position and its leaders were probably divided, as were its citizens, concerning the desired outcome. Prime Minister Netanyahu, for his part, remained neutral, emphatically stating before the election that he was «happy to work with whoever gets elected.»

Moreover, American Jews voted overwhelmingly in favor of Clinton. To be sure, some, such as Sheldon Adelson, contributed to Trump, but others, including many strong supporters of Israel, contributed heavily to Clinton. I would not be surprised if even in the face of Adelson’s huge contributions, more money from Jewish sources was contributed to Hillary Clinton’s campaign, but no one keeps track of such matters.

It is important to note that this is not an isolated incident. Stone’s bigotry towards Jews and their nation state is well documented. He has said that, «Hitler did far more damage to the Russians than [to] the Jewish people.»

And then argued that this fact is largely unknown because of «the Jewish domination of the media…there’s a major lobby in the United States. They are hard workers. They stay on top of every comment, the most powerful lobby in Washington.» He continued to say: «Israel has f***** up United States foreign policy for years.»

Moreover, Stone has also stated that, «Hitler is an easy scapegoat throughout history» and expressed affection for Cuban dictator, Fidel Castro, whom he called «a great leader.»

Clearly, there was no legitimate reason for Stone to bring up Israel in the context of a dialogue regarding Russia’s interference in the U.S. presidential election. By ducking questions about Putin and Russia, and then bizarrely accusing Israel of wrongdoing, Stone engaged in an old trope: blaming Jews – or the nation state of the Jewish people –for far reaching domestic political issues in foreign countries. By morphing the discussion about Putin’s untoward history of suppressing the press, killing political opponents, and engaging in cyber attacks against the U.S., into a polemic against Israel, Stone displayed his own bias.

The essence of anti-Semitism is the bigoted claim that if there is a problem, then Jews must be its cause. This is the exact canard peddled by Stone — and is extremely dangerous if unrebutted. I challenge my old friend (and co producer of Reversal of Fortune – the film based on my book) to debate me on the following proposition: did Israel do more to influence the 2016 election than Russia? If he agrees, he will once again be laughed off the stage.

Alan M. Dershowitz is the Felix Frankfurter Professor of Law, Emeritus, at Harvard Law School and author of «Taking the Stand: My Life in the Law» and «Electile Dysfunction: A Guide for the Unaroused Voter.»

Oliver Stone’s Response to Being Laughed at for Defending Putin: Blame the Jews
by Alan M. Dershowitz
June 14, 2017 at 3:00 pm
https://www.gatestoneinstitute.org/10529/oliver-stone-response-to-being-laughed-at-for