There are two great deportation games. One is the carousel which Rod Liddle describes — but even this, for all its madness, pales alongside the border-security catastrophe unfolding on the continent. Thanks to geography and a few sensible decisions by our government, Britain has so far been spared the worst of the migrant crisis. But we should pity most of the other European countries, because they are losing control not just of their borders but of their civilisation and culture — the whole caboodle. 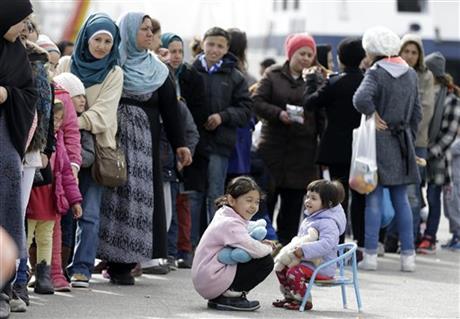 Defenders of Europe’s disastrous recent border policies are keen to point out the technical differences between illegal immigration, economic migrants and asylum claimants. But the reluctance to create any serious programme of removal for the first two is not only sapping public sympathy for the third, it is part of the same failure that allowed millions of migrants into the continent in the first place, without checking where they were from or considering the consequences of them coming.

A tolerance for illegal as well as legal immigration has become a European principle in recent years. But over the last 12 months that attitude has been turbo-charged. European leaders have been searching for a rationale for their madness. Chancellor Angela Merkel’s first justification for opening the doors of Europe lay in the minority of arrivals fleeing Syria. But as a far larger number of economic migrants arrived from across Africa, the Middle East and Far East, the rationale changed. Instead it became a wonderful opportunity for an ‘ageing continent’ to acquire a new influx of workers; a new generation to keep us all in the style to which we have become accustomed.

Almost nobody asks why this position was adopted at a time when youth unemployment rates in much of Europe are hovering around 50 per cent. But today even the European Commission admits that most of the people who came to Europe last year should not be here. In January, the Commission’s vice-president Frans Timmermans admitted that at least 60 per cent of recent arrivals were economic migrants, not asylum seekers. Not Syrians fleeing a war prolonged by Turkey and all the other Muslim states of the Middle East, but people who, in Timmermans’s words, ‘have no reason to apply for refugee status’.

Now futile second thoughts are everywhere. Even Sweden, the self-proclaimed ‘humanitarian superpower’, has been doing some thinking. The country’s own interior minister, Anders Ygeman, recently admitted that of the 163,000 people to whom the country opened its arms last year, at least 80,000 might be fake asylum seekers in need of deporting.

When, exactly, will Sweden deport those people — given that it managed to deport just 4,000 last year? Over many ensuing years, as Mr Ygeman pretends? Or never, as everybody else knows?

Even when Sweden does manage to arrange a deportation notice, three-quarters of the subjects immediately disappear. And since nobody bothered to check who was coming in from where, no one knows where to send most of the ones they do find.

It is the same story in Germany. How could it be otherwise in a country which brought in up to one and a half million people last year? Is Germany ever going to deport the more than three-quarters of a million people (according to the Timmermans estimate) who entered the country last year under false pretences? Of course not. They will slip into the black economy, a new generation of workers who will be on the run from the authorities and the law. In time, they will bring their families to join them.

Europe is expecting a similar number of migrants to arrive this year, and now the situation is so bad that last week Donald Tusk, the president of the European Council — appealed to the world: ‘Do not come to Europe.’ Too late. Last year, he and Angela invited them. And due to the incompetence, blindness or weakness of Europe’s leadership, everyone stayed. At last beginning to panic, those same leaders spent last week trying to slow the flow of migrants from Syria by doing a deal which flings the doors of Europe open to the citizens of Turkey.

Europe truly is on a suicide mission. All we have to decide is whether we want to be a part of it.