Mass Immigration and the Undoing of Europe

With the European Union surrendering its immigration policy to people smugglers, the immigration crisis in Europe keeps reaching staggering new heights. The word has gone out that Fortress Europe is scalable. From Morocco to Turkey, people smuggling has turned into an irresistibly big business.

From small-time thugs to the terror outfit Hamas — for $2500-$3000 per person smuggled — many evidently want to seize a slice of this lucrative business that was created by the EU’s collective inaction.

In Germany, where traffickers are now dropping off illegal immigrants on Autobahns, authorities have reacted — not by trying to intercept or discourage the traffickers, but by putting new road-signs alerting drivers of potential pedestrians on the highway.

Even before this year’s mass immigration began, Germany was struggling to deal with roughly a quarter of a million asylum applicants — without even accounting for the illegal immigrants already in the country. The recent wave of migration would push those figures to record heights.

The trend in Germany merely reflects the overall scale of the European immigrant crisis. In July 2015, an estimated 50,000 refugees entered Greece, a surge of 750 percent. Last month alone more migrants landed than in the whole of 2014.

In Germany, the head of Lower Saxony’s Municipal Federation, Marco Trips, told local reportersthat the «system has already collapsed.» This sentiment is apparently shared by municipalities across Germany. In a historic move, the German federal government has now called in the military to assist in setting up new tent cities and providing basic amenities for ever-rising number of refugees.

The majority of those entering Europe illegally seem not to be fleeing armed conflicts, but seeking a better life in a welfare paradise. Europe’s answer is to throw money at the problem — money Europe does not have. Britain’s Defence Secretary has suggested that the UK’s £12 billion ($19 billion USD) foreign aid budget can «discourage» mass migration.

The European welfare system, funded increasingly by governments’ debt in recent decades, is showing signs of an impending collapse. There is no end in sight for Greece’s debt crisis, despite repeated bailout packages to the tune of €326 billion ($375 billion USD). Slow economic growth, high youth unemployment and an aging population makes the European welfare model increasingly untenable.

If the mainstream media keep reminding everyone how rioting immigrant youths in France or Britain are driven by economic inequality now, imagine the scale of unrest once European welfare states cannot finance «half the planet» anymore and are forced to cut welfare benefits. 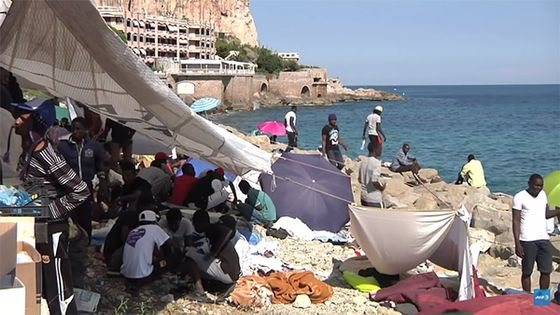 African migrants camp out on the beach in the northern Italian town of Ventimiglia, along the French border, as they wait for the opportunity to cross into France. (Image source: AFP video screenshot)

Europe’s answer to this imminent financial doom is to create still more welfare dependents or, even better, «invite» them by failing to secure the borders.

EU bureaucrats not only refuse to implement basic border controls but rebuke any EU member state moving to secure its borders. European politicians and the mainstream media are up in arms against Hungary’s move to erect a border fence along its southern border. American public broadcaster PBS ran a report telling its viewers about Hungary’s «new Iron Curtain.» The Associated Press quoted unnamed «critics» who compared the Hungarian fence to «Communist-era barriers like the Berlin Wall.»

The EU bureaucrats in Brussels want to force a single asylum policy on all 28 member states, asking that they take in more migrants. According to this common asylum policy proposed by Brussels, asylum seekers entering EU would be divided among EU members.

Hungary, with 60,000 migrant arrivals so far just this year, entering mainly from Serbia, remains the most vocal opponent of the EU’s proposed policy.

Hungarian Prime Minister Viktor Orbán has been virtually ostracized by European politicians and media, for not complying with EU’s immigration policy. Contrary to the EU’s position, he has called for a «distinction» between EU member-state citizens moving within Europe and non-EU foreigners. «There are economic immigrants who are just in search of a better life… Unfortunately in Hungary we can’t give jobs to all of these immigrants,» Orbán said, and called the EU’s proposal for member states to take in more refugees «absurd, bordering on insanity.»

Europe, itself reeling under a financial crisis, cannot provide housing, employment and social benefits to the thousands who each day land on European shores and cross over borders. German newspapers are full of countless reports of immigrants disappointed after arriving in Europe, almost always followed by a reporter’s plea for urgent action to address the said grievance. These «disappointments» often turn into violent clashes. Police across Germany have their hands full just to keeping rival migrant gangs from turning on each other or on officials.

No one, however, especially the media, blames migrants for their own actions. The mainstream media in Germany apparently refuse to connect the dots, so as not to «feed into negative stereotypes.» A columnist for Germany’s Tageszeitung even wrote of an elaborate government conspiracy that drives immigrants to turn violent — allegedly just to give them a bad name.

Tageszeitung also ran a story lamenting the «alarming conditions» of refugees landing on Greek islands. The article was accompanied by a photograph of smiling, well-fed, sturdy young men, posing for «selfies» on their smartphones while holding cigarettes in their hands. One of them was thoughtful enough to bring along a selfie-stick for his smartphone, to capture the moment he fled a «war zone» or acute «economic misery.»

This, however, is the real tragedy of the unfolding refugee crisis in Europe: apart from those fleeing combat zones, most migrants swarming European borders and coastlines do not appear to be in any real or dire need. Economic disparity on other continents should not oblige Europeans to open its own floodgates for mass migration.

This crisis seems to be one of Europe’s own making — that seems to be the logical conclusion of Europe’s debt-driven welfare system and the EU’s contempt for national boundaries.