PROTESTERS around the West, horrified by the massacre in Paris, have held up pens and chanted “Je suis Charlie” — I am Charlie.

They lie. The Islamist terrorists are winning, and the coordinated attacks on the Charlie Hebdo magazine and kosher shop will be just one more success. One more step to our gutless surrender. 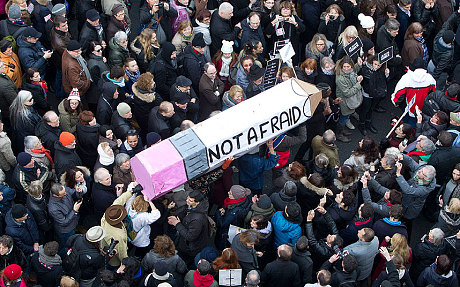 The opposite. It sent in the brothers Cherif and Said Kouachi because Charlie Hebdo was almost alone.

Unlike most politicians, journalists, lawyers and other members of our ruling classes, this fearless magazine dared to mock Islam in the way the Left routinely mocks Christianity. Unlike much of our ruling class, it refused to sell out our freedom to speak.

Its greatest sin — to the Islamists — was to republish the infamous cartoons of Denmark’s Jyllands-Posten which mocked Mohammed, and then to publish even more of its own, including one showing the Muslim prophet naked.

Are we really all Charlie? No, no and shamefully no.

No Australian newspaper dared published those pictures, too, bar one which did so in error.

The Obama administration three years ago even attacked Charlie Hebdo for publishing the naked Mohammed cartoon, saying it was “deeply offensive”.

President Barack Obama even told the United Nations “the future must not belong to those who slander the Prophet of Islam” and damned a YouTube clip “Innocence of Muslims” which did just that. The filmmaker was thrown in jail.

We are all Charlie?

In Australia, Charlie Hebdo would almost certainly be sued into silence, to the cheers of some of the very protesters now claiming to be its great defenders.

Victoria now has absurd religious vilification laws, thanks to Labor, that were first used to punish two Christian preachers who at a seminar quoted the Koran’s teaching on jihad and — complained the judge — made their audience laugh.

Australia also has oppressive racial vilification laws which Prime Minister Tony Abbott had promised to relax but last year decided to keep, saying changing them would become a “complication” in making Muslim Australians side with the rest of us against jihadists.

One more surrender, and did you note how most “serious” journalists brayed for this muzzle? Celebrated when two of my own articles were banned?

But our journalists haven’t really needed a muzzle. They have been only too eager to shut themselves up rather than call out the growing threat of jihadism, brought to us by insanely stupid programs of mass immigration from the Third World.

When Dutch political leader Geert Wilders toured Australia to warn against the danger Islamism posed to our physical safety and our freedom, he was treated as a pariah and the protesters who pushed and heckled his audience were handed the microphone instead.

When jihadists screaming “Allahu Akbar” shot dead US soldiers at Fort Hood or coffee shop patrons in Sydney, ABC and Fairfax journalists pretended they had no idea what ideology could have motivated such slaughter.

When Boko Haram jihadists screaming “Allahu Akbar” kidnapped nearly 300 Nigerian schoolgirls, forcing them to convert to Islam and selling them to be raped, Islamist apologist and terrorism lecturer Waleed Aly refused even to acknowledge on Channel 10 that Boko Haram actually had an Islamist agenda, describing it merely as a group of vigilantes.

And when SBS filmed the then Mufti of Australia, Sheik Hilaly, praising suicide bombers as heroes in the Lakemba mosque just days before the September 11 attacks, it refused to air the footage for fear we might get the “wrong idea”.

This will go on. Be sure of it. Your ruling classes will not easily admit to having made an error that cannot now be fixed. It will prefer oppression to freedom, if that brings at least the illusion of peace — and many may even think they are right.

You are told Muslim groups condemn the killings as unIslamic. Yet the Koran and Hadith preach death to unbelievers who mock Islam, and tell of Mohammed killing poets, singing girls and others who made fun of him.

No greater authority than the Ayatollah Khomeini, the then spiritual ruler of Iran, ordered the killing of writer Salman Rushdie for making mock of Islam in his The Satanic Verses.

We are also told the pen is mightier than the sword, but tell that to the people in the Charlie Hebdo office who found their fistfuls of pens no match for two Kalashnikovs.

Tell that now to even the brave leaders of Jyllands-Posten, who, after years of jihadist plots against their staff have had enough, refusing now to republish cartoons from Charlie Hebdo for fear of yet more attacks.

“It shows that violence works,” it admitted.

Everywhere you will find other papers making the same call.

We are all Charlie?

Bull. Absolute self-serving rubbish. The sell-outs are everywhere and will grow stronger.

The West’s political leaders have already told Muslim leaders they agree that mocking Islam is a sin, and have even passed laws — in France, too — making it unlawful.

They have attacked the very few journalists and politicians who dared warn against the Islamist threat.

Some now back Muslim demands for a boycott of Israel or at least greater recognition for the terrorists who run large parts of Palestinian territory.

Anything for peace, even if it means
submission.

And for all the protests this past week, submission is what you must expect.