When the truth is revealed, it can be not merely unpleasant but often accidental. There have been several striking examples of this since the massacre in Paris earlier this month. In the days immediately after the attack, The Times of London interviewed residents of Paris. Referring to the latest attacks, one 46-year old resident also referred back to the attacks in January on the offices of Charlie Hebdo and a Jewish supermarket. «Every Parisian has been touched by these attacks,» she said, referring to the latest attacks. «Before it was just the Jews, the writers or cartoonists.»

If «just the Jews» was an unfortunate way of putting it, it was no less unfortunate than the reaction of America’s top diplomat. Days after the latest Paris atrocity, U.S. Secretary of State John Kerry said:

«There’s something different about what happened from Charlie Hebdo, and I think everybody would feel that. There was a sort of particularized focus and perhaps even a legitimacy in terms of — not a legitimacy, but a rationale that you could attach yourself to somehow and say, okay, they’re really angry because of this and that. This Friday was absolutely indiscriminate.»

To the extent these comments have been noticed, they have been ridiculed. It is what lies revealed beneath the statement that deserves our attention.

The true problem with the line that it used to be «just the Jews, the writers or cartoonists,» is not that it is offensive or inelegant or any of the other words that are now used to shut down a discussion — though all these things it may be. The problem is that it suggests that people were not paying attention during those earlier attacks. It suggests a belief that the terrorism in January was a different order of terrorism — call it «understandable terrorism» — rather than part of a continuum of terrorism that now reached its logical endpoint, as «impossible-to-understand terrorism» — because «Jews, writers or cartoonists» were missing.

What if the terrorists had been targeting «just Americans,» or «just diplomats» — would that be «understandable terrorism» in Kerry’s thinking? That it used to be «Jews, writers or cartoonists» is precisely what made the attacks on everybody else inevitable. The only surprise should be our own surprise. 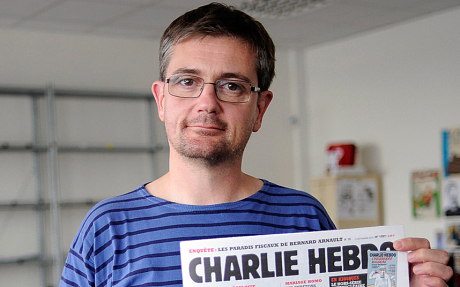 «Understandable terrorism» vs. «impossible-to-understand terrorism»? Stéphane Charbonnier, editor and publisher of Charlie Hebdo, was murdered in Paris on Jan. 7 along with many of his colleagues, in a terrorist attack that John Kerry said had «a legitimacy… a rationale that you could attach yourself to somehow and say, okay, they’re really angry because of this and that.» Kerry contrasted that with the Nov. 13 terrorist attacks in Paris (right), which he claimed were «absolutely indiscriminate.»

After the January attacks in Paris, there were large marches through the center of Paris, and the phrase, «Je Suis Charlie,» for a moment, seemed to be the hashtag or profile picture of everybody on social media. But, of course, almost nobody was Charlie, because apart from a lot of people dwelling on Twitter and Facebook under various virtual noms de guerre, very few people were keen to republish any cartoon of Mohammed or make new Mohammed cartoons of their own. Sadly, a few months after the attacks, the remaining staff members at Charlie Hebdo announced that they were not going to draw Mohammed any more. No one could blame them: as well as losing most of their colleagues, it must have been exhausting to be among the only people still exercising a right that everyone else was just pretending to defend on Twitter. Despite all the «Je Suis Charlie» signs, it turned out very few people were Charlie. In the end, even Charlie was not Charlie.

The «Je Suis Juif» signs were never likely to catch on as much as the «Je Suis Charlie» signs, nor be followed up on even as much as they were. Did everyone on the streets of Paris take to wearing a skullcap or Star of David? No — no more than they would have walked through any of the streets with reproductions of the cartoonist Kurt Westergaard’s image of Mohammed with a bomb in his turban. A lot of people said they were «Jews,» but they were not willing to put themselves in the same line of fire as Jews — just as a lot of people said they were «Charlie,» while not actually being interested in landing on the same Islamist hit-lists as Charlie.

The latest attacks in Paris were, indeed, targeted at absolutely everybody. In that, there should be a lesson of a kind. The lesson should remind us that in a free society, no one can wholly dodge the bullets of these particular fanatics. In the conflict that faces us now, there is no opt-out if you happen to be «lucky» enough not to be Jewish. There is no opt-out if you happen to think that people should not draw or publish opinions that are anything other than 100% agreeable to 100% of the people, 100% of the time. Because one day, you will be targeted for being at a restaurant or a concert, or for having the «decadent» temerity to attend a football match. That this has not yet sunk in to the public imagination is one thing. That it has still not permeated the understanding of the heads of the world’s only superpower is quite another.

A month after January’s terror attacks in Paris, there was a less-remembered terrorist attack on a free speech event in the U.S., and then on a synagogue in Copenhagen. I asked one of the organizers of the targeted free speech event what she would say to the people who claimed, «You know you might have brought this upon yourselves. You don’t have to keep publishing cartoons or defending other peoples’ right to publish cartoons, and you know how much the Islamists hate it.» Her reply was characteristically succinct: «If we should stop drawing cartoons, should we also stop having synagogues? Should they be converted into something else? Should we ask the Jewish people to leave?»

The problem was that too few people listened to such voices, or too few people fully understood the import of what those voices were saying. They were saying what the dead journalists and cartoonists of Charlie Hebdo had also been saying: If you give up this right, next, you will lose every other right. Much of the world may only have been just bragging or emoting in saying, «Je Suis Charlie» or «Je Suis Juif.» But it turns out not to matter: the terrorists of ISIS think we are all cartoonists and Jews anyway.

So here we are, at the end of what should be one of the world’s sharpest and most painful learning curves in recent history. At the end of this curve, we ought finally to be living with the realization we might have acquired earlier: that since we cannot live with ISIS and other ISIS-like groups, we had better live without them. We had therefore better do whatever it takes to speed up an end of our choosing before they speed up an end of their choosing.

The Real Lesson of the Paris Attacks