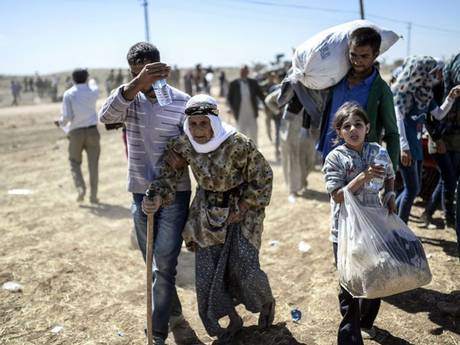 The battle-hardened veterans of the PKK and its Syrian franchise, the People’s Protection Units (YPG), have proved the most effective fighters against IS. The PKK, however, is still described as a “terrorist organisation” by the US and Europe, at the behest of Turkey, which fought against the PKK from 1984 to 2013.

Mohammad Ali had just crossed the border when the Turkish Jandarma began to fire tear gas into the crowd. “Even the Turks bomb us with gas,” he says. “I have a heart problem – four of my arteries are clogged and I need an operation as soon as possible.”

Anger at the Turkish government is palpable. Syrian and Turkish Kurds are convinced that Ankara is helping IS. Internationally, others believe Turkey’s reluctance to oppose IS more actively stems from fears for 49 Turkish hostages, including diplomats, captured after IS overran Turkey’s consulate in Mosul, Iraq, in June.

If Kobani falls, it would represent a huge strategic victory for IS – ensuring its control of border crossings with Turkey from Jarabulus all the way to Tel Abyad, 60 miles east.

Abdullah Ocalan, the jailed PKK leader, has called for fighters to go to Kobani to help the YPG repel IS attacks. A similar announcement was made in July when 1,000 PKK fighters went to Syria to fight alongside the Kurds.