To adapt Churchill : Never in the field of global diplomacy has so much been given away by so many for so little. 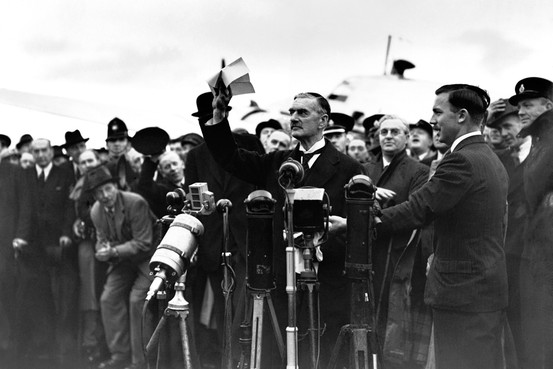 Britain and France’s capitulation to Nazi Germany at Munich has long been a byword for ignominy, moral and diplomatic. Yet neither Neville Chamberlain nor Édouard Daladier had the public support or military wherewithal to stand up to Hitler in September 1938. Britain had just 384,000 men in its regular army; the first Spitfire aircraft only entered RAF service that summer. «Peace for our time» it was not, but at least appeasement bought the West a year to rearm.

The signing of the Paris Peace Accords in January 1973 was a betrayal of an embattled U.S. ally and the abandonment of an effort for which 58,000 American troops gave their lives. Yet it did end America’s participation in a peripheral war, which neither Congress nor the public could indefinitely support. «Peace with honor» it was not, as the victims of Cambodia’s Killing Fields or Vietnam’s re-education camps can attest. But, for American purposes at least, it was peace.

By contrast, the interim nuclear agreement signed in Geneva on Sunday by Iran and the six big powers has many of the flaws of Munich and Paris. But it has none of their redeeming or exculpating aspects.

As for the Vietnam parallels, the U.S. showed military resolve in the run-up to the Paris Accords with a massive bombing and mining campaign of the North that demonstrated presidential resolve and forced Hanoi to sign the deal. The administration comes to Geneva fresh from worming its way out of its own threat to use force to punish Syria’s Bashar Assad for his use of chemical weapons against his own people.

The Nixon administration also exited Vietnam in the context of a durable opening to Beijing that helped tilt the global balance of power against Moscow. Now the U.S. is attempting a fleeting opening with Tehran at the expense of a durable alliance of values with Israel and interests with Saudi Arabia. «How to Lose Friends and Alienate People» is the title of a hilarious memoir by British author Toby Young —but it could equally be the history of Barack Obama’s foreign policy.

That’s where the differences end between Geneva and the previous accords. What they have in common is that each deal was a betrayal of small countries—Czechoslovakia, South Vietnam, Israel—that had relied on Western security guarantees. Each was a victory for the dictatorships: «No matter the world wants it or not,» Iranian President Hasan Rouhani said Sunday, «this path will, God willingly, continue to the peak that has been considered by the martyred nuclear scientists.» Each deal increased the contempt of the dictatorships for the democracies: «If ever that silly old man comes interfering here again with his umbrella,» Hitler is reported to have said of Chamberlain after Munich, «I’ll kick him downstairs and jump on his stomach.»

And each deal was a prelude to worse. After Munich came the conquest of Czechoslovakia, the Nazi-Soviet pact and World War II. After Paris came the fall of Saigon and Phnom Penh and the humiliating exit from the embassy rooftop. After Geneva there will come a new, chaotic Mideast reality in which the United States will lose leverage over enemies and friends alike.

What will that look like? Iran will gradually shake free of sanctions and glide into a zone of nuclear ambiguity that will keep its adversaries guessing until it opts to make its capabilities known. Saudi Arabia will move swiftly to acquire a nuclear deterrent from its clients in Islamabad; Saudi billionaire Prince Alwaleed bin Talal made that clear to the Journal last week when he indiscreetly discussed «the arrangement with Pakistan.» Egypt is beginning to ponder a nuclear option of its own while drawing closer to a security alliance with Russia.

As for Israel, it cannot afford to live in a neighborhood where Iran becomes nuclear, Assad remains in power, and Hezbollah—Israel’s most immediate military threat—gains strength, clout and battlefield experience. The chances that Israel will hazard a strike on Iran’s nuclear sites greatly increased since Geneva. More so the chances of another war with Hezbollah.

After World War II the U.S. created a global system of security alliances to prevent the kind of foreign policy freelancing that is again becoming rampant in the Middle East. It worked until President Obama decided in his wisdom to throw it away. If you hear echoes of the 1930s in the capitulation at Geneva, it’s because the West is being led by the same sort of men, minus the umbrellas.