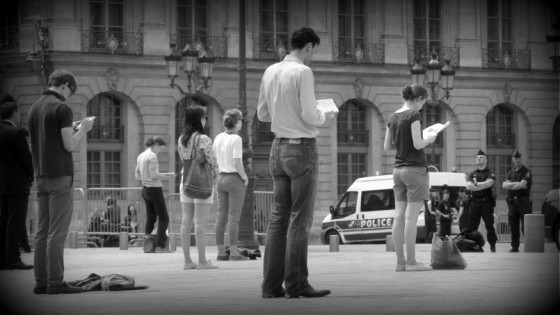 A few days ago, in a tract from Alliance, the CRS (riot police) expressed indignation over their «ridiculous» mission against the Veilleurs debout (standing vigils). Today, the anger has spread to the commissioners(«commissaires»). In the latest issue of the Tribune du commissaire, two of the three open editorials are devoted to the «growing malaise» within the police institution resulting from the repression of the anti-gay marriage demonstrations. «We’ve never seen this!» says a member of the SCPN union, which represents 60% of the commissioners, and which has always been very legitimist. «That shows the scope of the discontent.»

The first editorial, signed by a «collective of police commissioners», speaks of «a video that circulated on the Internet showing two of our colleagues releasing people dressed in clothing stamped with the Manif logo, following an identity check. If instructions were given to the entire police hierarchy to arrest people solely on those grounds,» assert the authors, «then the commissioners who decided to release them honor the the Corps de Conception et de Direction.» And in conclusion: «It is time to prove that our Institution is not an opinion police.»

The French word «commissaire» can be translated «commissary» or «commissioner». The latter is used in the U.S. I don’t know the difference, if there is any, between the two terms.

The second of the two open editorials, according to Emmanuel Roux, general secretary of the SCPN, is a letter from a police commissioner, aware of current events, to a dear colleague. He appears to be a «pied-noir» (i.e., a Frenchman born in Algeria and forced to return to France in 1962 after the war) and speaks of his grandmother, Eugénie, who «loved France very much, even though she had never gone there until tragic events forced her to leave her native soil 51 years ago. One day, she committed the insane act of waving a French flag at her window. Men in uniform burst in, breaking the door, and went after that flag.»

Today, Eugénie’s grandson is a division commissioner. «For several months, there have been rumbles in this country. I saw uniforms, and young demonstrators pinned against a wall. I saw some fall, others were led to the armored vans, in shock but proud. I will never be one of those officers. I love my grandmother too much,» he proclaimed.

Note: The story about the grandmother is typical. The French living in Algeria did not want to leave, but were forced to return to France. Once the peace accords were signed any sign of patriotism towards France was repressed, often savagely, by both Algerian and French forces.

Emmanuel Roux admits he hesitated before publishing his «colleagues who speak from the gut.» But he has received several similar requests and wanted to perform his duty as a union leader and allow them to speak. «I have no knowledge of police practices that varied according to who the demonstrators were,» he claims. «But public order is a complex alchemy…»

Note: It appears Roux is more pro-Valls than pro-police.

Within the SCPN union, however, many cannot not identify at all with the methods used. «It’s not that someone is pro or anti-gay marriage», says one commissioner who signed the first editorial. «It’s just that we are quite simply shocked. We perceive an enormous distortion between what happens with thugs who are repeat offenders and peaceful kids placed into custody because they are wearing a tee-shirt! Sometimes, you have to have the strength to say no. Our message is that we refuse to be a political police, whoever is in power.»

– If Adolf Valls’ troops are beginning to rebel, there is still hope.

– It’s a pleasure to discover that the injustice we feel is shared by the professionals. The heavy weight of government propaganda is slowly lifting.
– I remember the words of the motorcycle cop who was in charge of «channeling» the bus that took us to theManif at les Invalides: «With all my heart I’m on your side.»