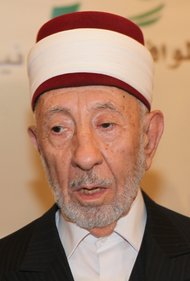 Sheik Mohammad Said Ramada al-Bouti, 84, was one of the most senior figures in Sunni Islam and was easily the most important religious figure to die so far in the war, in which more than 70,000 people have been killed. His early support for the government in the conflict was considered crucial to Mr. Assad’s legitimacy because the insurgency has drawn largely from Syria’s majority Sunni population.

Mr. Assad is a member of the minority Alawite sect, an offshoot of Shiite Islam, and his closest advisers and loyalists are Alawites, but the president still claimed credibility as a unifier of Syria’s religious sects partly because of the backing of prominent spiritual figures like Sheik Bouti.

“He was the most important Sunni clerical supporter of the Assad regime,” said Joshua M. Landis, the director of the Center for Middle East Studies at the University of Oklahoma and the author of the Syria Comment blog, which has tracked the conflict’s progression from a peaceful political uprising to a sectarian-tinged civil war. “It is a great blow to the regime and the remaining Sunni supporters of the president.”

Mr. Landis said the sheik had been reviled by some Syrian revolutionaries when he came out early in the conflict to denounce the uprising. He was known for having a prodigious memory, was the author of at least 40 books and was ranked 23rd on a list of the most influential 500 Muslims in the world.