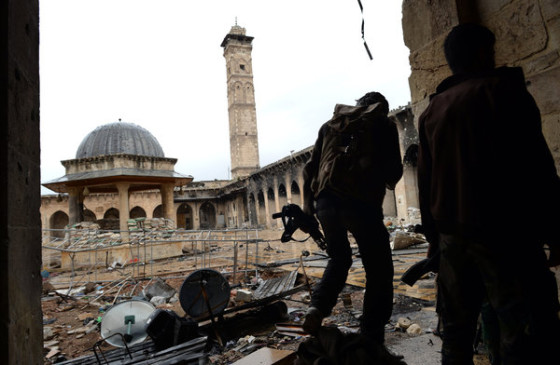 The mosque is considered an archaeological treasure but has been a battleground for months. It was first heavily damaged by fighting last October, and President Bashar al-Assad promised a restoration. But the military later retreated from the mosque and rebel fighters have occupied it since early this year.

Syria’s state media said the Nusra Front, an Islamic militant faction of the insurgency, had placed explosives inside the minaret, which dated from the 11th century. Anti-Assad activist groups at the site posted YouTube videos showing the rubble of the collapsed minaret strewn about the mosque’s tiled courtyard, with rebel fighters saying it had been hit by outside artillery fire as part of an attempt by Mr. Assad’s forces to rout them and retake the mosque.

“If he attacks all of the mosque, we will stay here, we will stick with our position, we won’t abandon our Islam even if all the world does,” one military commander says in a video.

On Wednesday, Sheik Moaz al-Khatib, the departing president of the National Coalition for Syrian Revolutionary and Opposition Forces, the main anti-Assad political group, angrily criticized Hassan Nasrallah, the general secretary of Hezbollah, over his support for Mr. Assad and urged him to renounce the alliance.

“Is it satisfying to you that the Syrian regime shells its citizens with fighter planes and Scud missiles, mixing the blood and flesh of children with the bread?” Sheik Moaz asked in a speech, posted on his Facebook page. Citing a call by two Sunni scholars this week for a holy war in Syria, Sheik Moaz said it was a “response to the chilling events that are occurring, from the butchering of civilians and the gushing of blood, to the screams of the women in the prisons.”