Europe Loses One of Its Most Courageous Politicians
by Peter Martino

It is easy to forget that Israel fights a defensive war 365 days a year. And that its enemies never grant the Jewish state a moment of peace. Last month saw a significant increase in the number of terrorist attacks: 166 as opposed to 91 in the previous month. The attacks include rocket launching and mortal shelling from Palestinian territories, gun shootings, stabbings, explosions and firebombs. Even the threat of nuclear annihilation is increasing as Iran develops a bomb.

Especially Europeans, who live in the illusion that the whole world will remain in peace if unprovoked by the West, have little consideration for the situation Israel is in. One of the few European politicians who understood Israel’s plight was Uri Rosenthal, the previous Foreign Minister of the Netherlands. 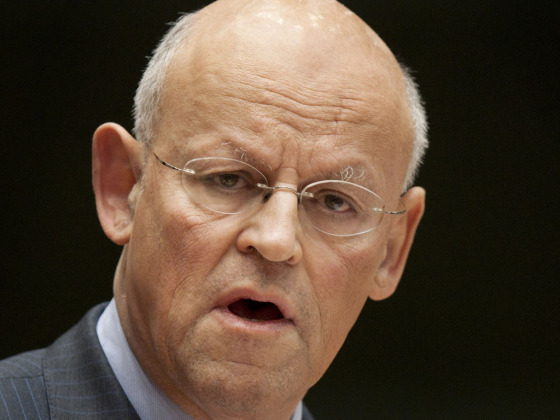 Mr. Rosenthal was born in Switzerland in 1945 of Jewish parents who had fled the Netherlands from German occupation. As his wife is Israeli-born and two of his sisters live in Israel, Mr. Rosenthal has an intimate knowledge of the situation in the Jewish state. As such, he was a much needed voice in the international community. He opposed anti-Israeli reportsby the European Union and the United Nations, urged the EU nations to isolate Hezbollah, and at home in the Netherlands he had the Dutch government cut its funding of NGOs that deny Israel’s right to exist.

During his stay at the helm of the Dutch Foreign Ministry, Mr. Rosenthal did not have an easy time. Many of the civil servants and diplomats at the Ministry opposed his policy on Israel. They advised the Minister to take positions more in line with the pro-Palestinian positions of the EU and the international community. The Minister courageously persevered. The situation was so bad that, according to the Dutch media, Secretary-General Ed Kronenburg, the highest civil servant at the Ministry, even refused to pick up the phone when the Minister called.

Mr. Rosenthal assumed that he had the support of Prime Minister Mark Rutte, the leader of the Dutch Liberal Party to which Mr. Rosenthal belonged. Until the fall of the first Rutte cabinet last spring, the Netherlands were governed by a coalition of Liberals and Christian-Democrats which had the support of the Freedom Party of Geert Wilders. Wilders had lived in Israel as a young man and, though not Jewish, is a staunch supporter of the democracy.

After the September 2012 elections, however, Mr. Rutte decided to form a new cabinet with the leftist Labor Party. While all the previous Liberal cabinet members were given a position in the new government, Uri Rosenthal was dropped. «Mr. Rutte has not asked me for his new cabinet,» a disappointed Mr. Rosenthal said. He was replaced at the helm of the Foreign Ministry by Frans Timmermans, a Labor politician.

Mr. Rosenthal left the ministry in silence, without attending the reception held on the occasion of his end of term. On the internal website of the ministry, civil servants posted good riddance messages, criticizing the former minister and welcoming his successor. The new minister, Frans Timmermans, is more in line with the positions of the Foreign Ministry staff. Mr. Timmermans is known for his pro-EU and pro-Palestinian positions. Barely three days after his appointment as the new Dutch Minister of Foreign Affairs, he condemned the construction of Jewish housing in East Jerusalem, which he considers to be Palestinian territory. The new government also aims for close relations with the Palestinian Authority.

Mr. Timmermans is known for his Israel-bashing, which he does even with arguments such as, during the summer election campaign, defending the right of Palestinian refugees to reclaim their former properties in Israel. Without even a look at how Arabs treat other Arabs — not to mention how Arabs treat Palestinians, whom they keep confined in squalid camps without even the right to work in many fields — he compared the treatment of the Palestinians by the Israelis with the treatment of the Volga and Sudeten Germans after the Second World War. Last month, Mr. Timmermans also argued in favor of a legal ban of Mr. Wilders’s Freedom Party, stating that in Germany such a party would be declared unconstitutional.

Last week, during a symposium on inter-religious and intercultural dialogue which coincided with the anniversary of the 1938 Reichskristallnacht, Mr. van Agt said that after the Second World War the Jews should have been given a state in Germany rather than in the Middle East. «The Jews needed a safe place. Why haven’t they been given a safe haven in Germany?» he said. Mr. van Agt, who considers Israel to be a terrorist organization on a par with Hamas, added that it is «utter nonsense» to think that a dialogue between Israelis and Palestinians is possible.

Mr. Timmermans has not reacted to Mr. van Agt’s declarations. His own remarks comparing Palestinians with Volga and Sudeten Germans, who should be given back their former properties, and Mr. van Agt’s statement about a Jewish state which should have been created in Germany, indicate that, unlike Mr. Rosenthal, neither of these two Dutch politicians has any understanding of the profound historical and religious heritage, reaching back nearly three thousand years, that binds the Jewish people to the Land of Israel.