In Aug 1938, the German government announced that residence permits for foreigners, which included German-born Jews, would be canceled, and those affected risked deportation. Meanwhile, the Polish government noted that it would not accept German Jews of Polish origin beyond the end of Oct 1938. On 28 Oct 1938, Germany deported 12,000 Polish Jews, each allowed only one suitcase, and the rest of their possessions were generally confiscated by the government, though some neighbors looted the recently vacated homes. The Polish government initially attempted to reject them, and the Jews waited in the rain for days. 4,000 were eventually granted entry, while the others were placed in refugee camps on the Polish side of the border with terrible living conditions. There was at least one report of Jews attempting to sneak back into Germany and were shot by German border guards. 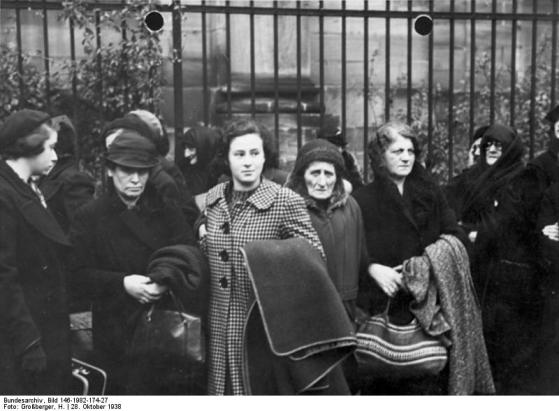 Among the Polish-German Jews deported were Sendel and Rivka Grynszpan, parents of 17-year-old Herschel Grynszpan, who was living in Paris, France during the deportation. He learned of the news on 3 Nov from his sister Berta who sent a postcard from one of the refugee camps. «No one told us what was up, but we realised this was going to be the end…. We haven’t a penny. Could you send us something?», she wrote. There was nothing he could do, and the inability to help his family frustrated him. On the morning of 7 Nov, he purchased a revolver and a box of ammunition, and then headed toward the German embassy in Paris. He asked to see an embassy official without naming anyone in particular, and was taken to the office of diplomat Ernst vom Rath. Grynszpan shot Rath three times in the abdomen and remained in the embassy for the police to arrest him. He confessed to the assassination without reservation. French police found a postcard in his pocket addressed to his parents; on it, he wrote «May God forgive me…. I must protest so that the whole world hears my protest, and that I will do.»

On 8 Nov, Germany announced the first punitive measures in response to the shooting. Jewish newspapers and magazines were forced to cease publication and all Jewish cultural events were canceled indefinitely; these actions were aimed at cutting off Jews from their community leaders. Jewish children were also barred from attending public elementary schools.

On 9 Nov, Rath died from his wounds. At the time, Hitler was attending an event in celebration of the anniversary of the 1923 Beer Hall Putsch. Hitler left the dinner early, and propaganda chief Joseph Goebbels took Hitler’s usual place for the speech, who announced that the party would not organize any demonstrations, but should any demonstrations take place, the party would not interfere. Off the record, Goebbels was essentially announcing that local party leaders were to launch demonstrations in any manner they like, and the central party administration would not interfere with their plans, which would not be considered a state program. Some of the Nazi Party leaders, including Heinrich Himmler, did not agree with Goebbels’ strategy, which risked a diplomatic disaster, but Goebbels already gained Hitler’s approval to go ahead with whatever he had planned.

At around 2230 hours on 9 Nov, within hours of Rath’s death and even before any Nazi Party leaders had given any instructions, some of the local Gauleiters had already begun to organize and execute protests and demonstrations. At 2300 hours, members of the SA organization were reported to be smashing Jewish businesses with sledgehammers and axes, dressed in ordinary clothing instead of their uniforms because they have not yet received official instructions.

At about 0120 hours on 10 Nov, Reinhard Heydrich sent an urgent secret telegram to the state police and the SA organization. The contents were very specific, noting that foreigners and non-Jewish businesses were to be protected to avoid a diplomatic incident, thus synagogues too close to these sensitive areas were to be smashed and not burned, while others could be looted and burned by rioters without concern. He also instructed the police to round up healthy male adult Jews for concentration camp placement. Any Jewish archives seized from synagogues and Jewish community centers were to be transferred to the SD organization. Finally, they were to confiscate firearms from Jews, thus removing the threat of resistance for future attacks on Jews.

Many of Heydrich’s men were successful in inciting a number of civilians to join in on the attacks, though the number of civilians was unknown due to the fact that many of the SA men were hiding in every-day attire. The vandals systematically destroyed Jewish shops, attacked synagogues, and arrested Jews.

In the East Prussian city of Königsberg, Nazi thugs gained entry into the synagogue at Lindenstraße and locked themselves inside. They desecrated the Torah, then threw the remains of the scrolls out of the windows into the street. The Jewish orphanage on the premises was burned down. Finally, they set fire to the synagogue’s dome; it was to collapse the next morning. Jewish businesses were hit, too. Some were vandalized, some looted, while others were totally destroyed.

In the morning of 10 Nov, the sun came up over a Germany whose streets were littered with broken glass, which led to the name Night of the Broken Glass. 1,574 synagogues, nearly all in Germany, were damaged, and 267 were destroyed; in Vienna, Austria, 94 synagogues and prayer houses were damaged or destroyed. Many Jewish cemeteries were desecrated. 7,500 Jewish-owned businesses were vandalized or destroyed. About 100 Jews were killed as the direct result of the attacks between 9 and 10 Nov, but many of those arrested on this night would die in the concentration camps later.

Mob law ruled in Berlin throughout the afternoon and evening and hordes of hooligans indulged in an orgy of destruction. I have seen several anti-Jewish outbreaks in Germany during the last five years, but never anything as nauseating as this. Racial hatred and hysteria seemed to have taken complete hold of otherwise decent people. I saw fashionably dressed women clapping their hands and screaming with glee, while respectable middle-class mothers held up their babies to see the «fun».
In the morning of 11 Nov, Goebbels officially called an end to the violence on the streets, although the violence in the concentration camps continued; 2,000 and 2,500 of the 30,000 arrested would die in the camps, many beaten to death. Although the violence on the street ceased for now, the Jewish population continued to suffer. The Jewish community collectively was fined 1 billion Reichsmarks for the murder of Rath. The payment began with the confiscation of insurance payments that would have been made to the businesses for the damages and the confiscation of 20% of all Jewish-owned property. This night of violence against German and Austrian Jews was later named Kristallnacht; literally «Crystal Night», it was often referred to as the Night of the Broken Glass in English. It was often considered the turning point where Nazi anti-Semitism transformed from rampant prejudice into the beginning of the Holocaust.

Although Kristallnacht was advertised as a spontaneous reaction of the German people instead of an organized night of violence, unfavorable international reaction was impossible to avoid. However, European powers failed to assert firm pressure on Germany to stop such state-sponsored persecution. Popular opinion of the Nazi state declined dramatically after Kristallnacht, however, as it began to reveal the ugliness beneath Hitler’s Germany.

In the ten months following Kristallnacht, 115,000 Jews emigrated from Germany, most of them to other neighboring European nations, the United States, and Palestine. 14,000 of them moved to Shanghai, China, where a large Jewish community existed. Around the world, many governments began to distant themselves from Germany. Activists against the Nazi regime in countries such as the United Kingdom and France began to lobby for war.