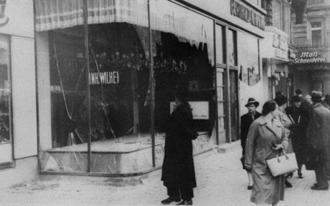 Angela Hermann, an historian at Munich’s Institute for Contemporary History, has decoded a mysterious passage in the diary of Hitler’s propaganda minister Joseph Goebbels that had stumped scholars ever since this section of Goebbels’ diaries was retrieved from Moscow in 1992.

»We have real evidence now that Hitler pulled the strings, that he personally directed the Kristallnacht,» Dr Herman said, using the German name for the notorious night.

The riddle revolved around Goebbels’ enigmatic reference to »Hitler’s Stosstrupp», or Hitler’s »special troops». In his diary entry for November 9, the Nazi propaganda minister recounts a rally at the Munich Town Hall in which Hitler told him, among other things, that the police should let people express their anger over the vom Rath assassination.

Goebbels then wrote: »Hitler’s Stosstrupp goes out immediately to clean up Munich … and a synagogue is smashed.»

This had historians puzzled, as there was no force known as »Hitler’s Stosstrupp» in 1938. By digging through Munich archives, Dr Hermann found letters and documents to show that the term referred to the veterans of Hitler’s failed attempt to seize power in 1923, known as the Beer Hall Putsch.

These old street fighters remained loyal to Hitler, taking orders from no one else. Dr Hermann found invitations and seating plans for the November 9 Town Hall rally that showed 39 of these old comrades sat at adjacent tables to Hitler. They included Hitler’s chief adjutant Julius Schaub and chauffeur Emil Maurice. These were the same 39 men who later hit the streets and destroyed the Ohel Jacob synagogue that night, fanning the flames of an incendiary situation – on direct orders, Dr Hermann concludes, of Hitler himself.