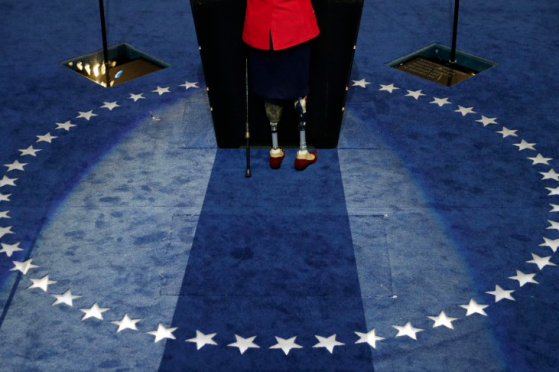 The photograph above is of Tammy Duckworth, a candidate for U.S. Congress in Illinois’ Eighth District, speaking at the Democratic National Convention this past week. She is also a war hero, having been among the first women to fly combat missions in Iraq, losing both of her legs when a grenade landed in her lap while piloting a Blackhawk helicopter north of Baghdad.  Her opponent for Congress, the incumbent Republican Joe Walsh has accused her of not being a “true hero” because she makes a point of discussing her military service in her campaign.  To quote former President Clinton in a different context, “that takes some brass,” especially coming from someone who has never served a day in the military in his life.  But the photograph above is not about Congressman Walsh’s Neanderthal attitudes nor even about Tammy Duckworth’s heroic service and sacrifice to her nation—or at least not explicitly so.

Shot from behind the podium and at a high angle that crops her body at the waist and accents her prosthetic legs, the photograph emphasizes what the viewing audience could not see—at least not while she was speaking. Viewed from the front we see a face, the marker of the liberal individual, a person.  And any person who can make their way onto the national stage to address a live audience of thousands and a mass mediated audience of millions can’t be doing all that bad.