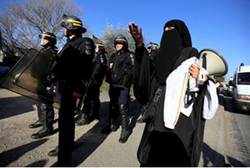 Several French Muslim studentshonored a one-minute silence for the Toulouse murderer, and Facebook page paid “homage” to the killer until the social networking company banned it.

Others condemned Israel for “exploiting” the murders, and some French media called the terrorist a “child” while others said he was a victim of economic hardship for Muslims.

Although most French schools held a moment of silence in memory of the victims, one teacher in Rouen staged a moment of silence for Mohammed Merah, who killed a rabbi and three young children at point-blank range last week at the Otzar HaTorah Jewish school in Toulouse. He  killed three French paratroopers of North African and Carribean origin, all of whom were Muslim, the week prior.

Most of the children left the classroom in protest, but others honored the teacher’s request, and student proclaimed that the murder victims “deserved it.» The teacher explained that Merah, linked to Al Qaeda, was a “victim” and that media reports of his Al Qaeda links were a media invention.

The education authority suspended her after protests but pointed out the disciplinary action does not necessarily mean that the teacher is “guilty.” The teacher’s union later said that the teacher regretted her comments.

The local education authority said the suspension does not mean she is guilty.

A Facebook page paid homage to Merah until the site managers removed it, but not before several hundred people clicked on it, many of them leaving remarks againstthe police and in support of Muslim fanaticism.

The Electronic Intifada stated on its site, “What does the spokesman of Israeli Prime Minister Benjamin Netanyahu do when his propaganda efforts fail to conceal Israel’s abuses of Palestinians? He uses the blood of Jewish children murdered in the French city of Toulouse last week to try to blot them out. This is low, even for Israeli official propaganda.

“Since 16 February – when Israeli occupation forces violently seized from her home in the West Bank village of Burqin – Hana al-Shalabi has been on hunger strike because she has no other way to resist the injustice Israel is inflicting on her and her family.”

Several media outlets in France termed the 24-year-old Merah a “child” who was a victim of poor socio-economic conditions.

Le Figaro backed a popular theme in French media that there was “no doubt» that Merah was incited by “Islamophobia.”

The New York Times noted that French “Muslims complain widely of feeling vilified by some political elements, on the right in particular.”