Asked what was different about the victims of the incident, another doctor said: «It was very strange. I have seen so many dead bodies in my life, and was yet traumatised. A bomb blast victim’s body might have been torn apart and could be a very disturbing sight. But the bodies of the victims in this attack bore such signs about the kind of violence of urban warfare that I am still unable to put my thoughts to words,» he said.

Asked specifically if he was talking of torture marks, he said: «It was apparent that most of the dead were tortured. What shocked me were the telltale signs showing clearly how the hostages were executed in cold blood,» one doctor said.

The other doctor, who had also conducted the post-mortem of the victims, said: «Of all the bodies, the Israeli victims bore the maximum torture marks. It was clear that they were killed on the 26th itself. It was obvious that they were tied up and tortured before they were killed. It was so bad that I do not want to go over the details even in my head again,» he said.

Krishnakumar P. and Vicky Nanjappa, reporting from Mumbai, cited by Andrew Sullivan and Jeffrey Goldberg in The Atlantic Online

For the whole of my adult life, it irked me when my fellow Jews would routinely and without compunction, accuse anti-Zionists of being anti-Semitic, and conflate anti-Israeli sentiment with the Nazis.

I felt that the latter eroded the memory and the magnitude of the Holocaust, and that the former was a slightly more elegant way of telling people with whom one took issue, to shut the hell up.

Only this week did I realize my error.

After all this time, I am embarrassed to admit that only when the monsters entered Chabad House in Mumbai, did I understand. 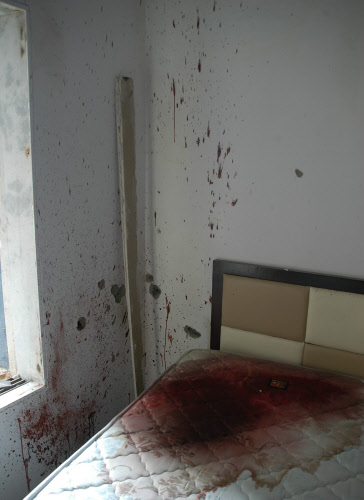 Monsters, not solely for what they did there, but, if the reports are to be believed, for the fact that they were able to do what they did after having actually gotten to know the young couple who founded the center, after asking them for shelter in Chabad House, after telling them that they were Malaysian students eager to learn about Judaism.

Monsters, for having befriended these sweet people in order to better learn how to execute them. Monsters, for having targeted a young couple who had devoted their lives to helping others better live theirs, despite having had a baby who died of a genetic disease and a second child ill and under treatment far away in Israel.

The monsters in Chabad House were not Nazis because they were Muslims. It was specifically because they so faithfully emulated the Nazis, that they, in fact, betrayed Islam.

The hatred of the Jihadi for the Jew is such that – as in the case of the Nazis – the killing of Jews – anywhere they may be found – is an obligation on par with whatever other enemy, target, cause, mission, goal or creed they may be pursuing at the moment.

Their hatred of the Jew is such that – as in the case of the Nazis – all tragedy that befalls the Jews was brought on by the Jews themselves.

Their hatred of the Jew is such that even if a Jew rejects the concept of a state of Israel and is wholeheartedly opposed to Zionism, if he wears the clothing of a believing Jew – as in the case of victim Aryeh Leibish Teitelboim – he will be bound and tortured and put to death.

It is no longer a question of geography or personal experiemce. On September 11. the jihadis told us that the attacks came, in part, in response to the atrocities of the Jews. In the next breath, they told the Muslim world that the Jews were also behind the attacks.

«The Jews are a virus resembling AIDS, from which the entire world suffers,» Sheikh Ibrahim Mudeiris said in a sermon broadcast on Palestinian Authority television shortly before Israel pulled out of Gaza in 2005. «You will find that the Jews were behind all the civil strife in this world.»

«It was the Jews who provoked Nazism to wage war against the entire world, when the Jews, using the Zionist movement, got other countries to wage an economic war on Germany and to boycott German merchandise. The Jews are behind the suffering of the nations.»

«They are committing worse deeds than those done to them in the Nazi war. Yes, perhaps some of them were killed and some burned, but they are inflating this in order to win over the of the media and gain the world’s sympathy. The worst crimes in history were committed against the Jews, yet these crimes are no worse than what the Jews are doing in Palestine.»

While waiting, hours and then days, for word of the fate of Gabi and
Rivki Holtzberg, I happened onto the memoirs of the handful of survivors of a now-extinct Jewish community near Bialystok, Poland, where my father’s uncle, Herschel Cinowitz, had been born.

In 1941, when he was a young man, he escaped the Nazis by making his way to refuge in Bombay, later Mumbai.

This is the first thing that I learned: You don’t have to be German to be a Nazi. The SS ruled Yedwabne, Herschel Cinowitz’ little town, but the locals were only too pleased to do their work for them.

«In the middle of the market place was a statue of Lenin,» one survivor recalled. «The goyim forced the old Rabbi to carry the statue and recite, «We Jews are responsible for the war and want the war to continue». Then they ordered a burial for the statue in the Jewish cemetery.»

Forty of the Jews of Yedwabne were forced to dig graves, then were buried alive. The remainder, 1,440 in all, were taken to a large barn, where they were burned alive.

The jihadi shows his love in other ways. He delights in quoting Khalid ibn al-Walid, the 7th Century Muslim general who warned the emperor of Persia that if he failed to submit to Muslim authority, «you will be conquered against your will by men who love death as you love life.» He delights in dismissing the Jews as weak for their love of life, which is equated with cowardice.

A Jew who, as memory serves, was neither Zionist nor observant, once quoted a verse of Hindu scripture which could serve us in comprehending the work of the jihadi:

«Now I am become Death, the destroyer of worlds.»

Muslims the world over have recognized that the jihadi is a terrible threat to Islam. The world has seen that the jihadi, in hating the Jew, the Christian, the Hindu, the Muslim of another denomination, has become – like the Nazi – the enemy of all peoples everywhere.

The jihadi shows his love of death in brutality, sadistic executions, the self-righteous calm of the premeditated mass murderer, the blaming of the victim for the crime.

One lesson of the Holocaust is that one can’t afford to miss the signs and the intentions.

My father’s uncle saw them in time. At the time, Mumbai was his salvation.

I’m only seeing it now.