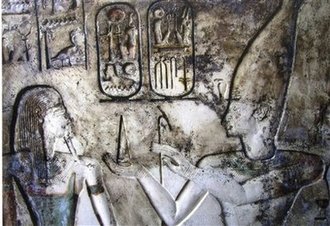 Archaeologist Mohammed Abdel-Maqsoud, chief of the excavation team, said the large brick temple could potentially rewrite the historical and military significance of the Sinai for the ancient Egyptians.

The temple contains four hallways, three stone purification bowls and colorful inscriptions commemorating Ramses I and II. The grandeur and sheer size of the temple could have been used to impress armies and visiting foreign delegations as they arrived in Egypt, authorities said.

The dig has been part of a joint project with the Culture Ministry that started in 1986 to find fortresses along the military road. Hawass said early studies suggested the fortified city had been Egypt’s military headquarters from the New Kingdom (1569-1081 B.C.) until the Ptolemaic era, a period lasting about 1500 years.

In a previous find, archaeologists there reported finding the first ever New Kingdom temple to be found in northern Sinai. Studies indicated the temple was built on top of an 18th Dynasty fort (1569-1315 B.C.).

Last year, a collection of reliefs belonging to King Ramses II and King Seti I (1314-1304 B.C.) were also unearthed along with rows of warehouses used by the ancient Egyptian army during the New Kingdom era to store wheat and weapons.

Abdel-Maqsoud said the fortified city corresponded to the inscriptions of the Way of Horus found on the walls of the Karnak Temple in Luxor which illustrated the features of 11 military fortresses that protected Egypt’s eastern borders. Only five of them have been discovered to date.