Something rotten in the state of Norway

The pictures tell an interesting story. All over Europa Muslims are protesting the war in Gaza. At the fringes are anti-Israeli and antisemitic slogans and cartoons. But in Norway this extreme Islamist right is echoed in the official press: antisemitic slurs and cartoons are printed in Norway’s established newspapers.

It is hard to believe.

On Thursday the 8th of January a rally was held in front of Norway’s Parliament building. A few hundred souls protected by 200 police in full riot gear. Many participants were elderly people bussed in from far away. Maybe they didn’t know what was in store. Few Oslo citizens dared to go out. There was foreboding in the air.

The daily Dagbladet had two days earlier carried a front page that screamed: Siv Jensen supports the bombing, with the title transposed on a picture of a wounded Palestinian child. Siv Jensen is the leader of Norway’s biggest opposition party, the Progress Party. All the other parties tend to agree on major points and keep PP on the outside in spite of a 25-30 percent backing in the opinion polls.

Not only the political parties but also the press has moved to the center-left in later years, presenting the Progress Party as something that does not belong here. Like Israel.

When Siv Jensen dared to speak in front of the Parliament she was committing something like sacrilege, a blasphemy against political decency, a favourite word with the foreign minister, the suave Jonas Gahr Støre.

The pro-Israeli demonstration had to be halted and the participants were shuffled into busses for the ride home. On the way several were attacked and brutally beaten to cries of «Attack the Jew».

The very same night there was a huge protest march, officially pro-peace but unofficially pro-Palestinian. Leader of thee Mosaic community, Anne Sender, and rabbi Joav Melchior decided to take part, but cries of «Kill the Jews» in Arabic made their blood freeze. Melchior wears a kippa, and he was verbally abused and told to go packing. With sadness they both left.

On Saturday there was another demonstration in front of the Parliament building, this time with children in «bloodsoaked» clothes at the front of the march. In spite of several brutal confrontations outside the Israeli embassy Basim Ghozlan, leader of the Islamic Union, urgfed the demonstrators to proceed to the embassy where police were waiting. The children suddenly found themselves sandwiched between police barriers and the surging violent demonstrators pushing from behind. Panic ensued.

Police detained 160 people, most of them young people of Middle Eastern/North African origin. Three kids – 12 to 13 year olds – told how they had been led by a hard core to smash seven MacDonald’s restaurants. Then the cry rang out: «To the university to chase Jews.»

One should think that the papers woud be full of denunciations and shock that Jews are once again fair game in the streets of Oslo. The last time was under the German occupation during World War II. But there is a strange silence. A few innuendos: «We deplore expressions of racism» etc. But no real shakeup. Why not?

One answer: There is no firewall between criticism of Israel and antisemitism and one is afraid of criticizing the Muslims. An inverse situation: unchecked criticism of Israel, and very timid critcism of Muslims. The situation is not unique in Europe, but seems to deteriorate quickly. A caricature in Norway’s largest daily, VG, gives an indication. 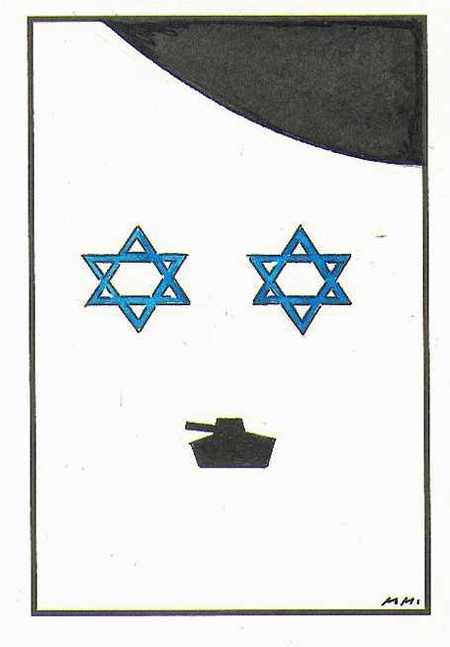 This cartoon appeared onThursday January 8th on the very same day that the mob shouted «Kill the Jews».

Gunnar Stålsett, the former bishop of Oslo and well-known liberal and theologian, said repeatedly that it would be against Christian principles to take part in the demonstration in support of Israel. The leader of the Christian Peoples Party, Dagfinn Høybråten, said it would not be proper for him to take part. Thus, supporters of Israel were reduced to old diehards and presented as such. They were even blamed for the riots that followed. Why couldn’t they have stayed at home?

In this way a consensus is created that knows no other perspective than condemning Israel – and the Jews.

The two Norwegian doctors Mads Gilbert and Erik Fosse have gained international fame for their work at the Rifah hospital i Gaza. As insiders, the Norwegian media could have presented a more nuanced view of their reporting from Gaza. Instead the press went over board in their praise of their work, both medical and journalistic.

The two of them think the conditions in Gaza resemble the Warzaw ghetto during World War II.

Gilbert also believes in boycotting Israel. He himself has not bought a Jaffa orange in many years.

«They taste of blood. Maybe boycott would be a language Israel would understand. Maybe it will make them reconsider,» says Gilbert.

Interview in the daily Dagsavisen Monday 12th of January 2009.