A DNA analysis shows Neanderthals share with humans two key changes in the FOXP2 gene known to be involved in speech, raising the possibility the species possessed some prerequisites for language, the researchers said.

«From the point of this gene at least the Neanderthals could have had language like we do,» said Johannes Krause, a biochemist at the Max Planck Institute in Leipzig, who led the study.

But many as yet unknown genes may also underlie the capacity for language, the researchers added.

FOXP2 produces a protein that turns other genes on and off and people who carry a non-functioning copy of the gene have speech and language problems.

Animals ranging from mice to orangutans have the gene and scientists had thought a relatively small change in FOXP2 emerged just as humans did less than 200,000 years ago.

The findings published in Current Biology suggest the genetic variation occurred long before, potentially as long as 400,000 years ago.

«We were surprised to find the same variant of the FOXP2 gene that humans have,» Krause said. «This suggests that the last common ancestor Neanderthal and humans shared had this gene.»

Neanderthals were a dead-end offshoot of the human line who inhabited Europe and parts of west and central Asia. Research indicates they were expert tool-makers, used animal skins to keep warm and cared for each other.

Most researchers believe Neanderthals survived in Europe until the arrival of fully modern humans about 30,000 years ago although controversial findings last year suggested they might have survived until as recently as 24,000 years ago.

Nobody knows if Neanderthals could talk but this finding shows they had at least had a key genetic change required for speech — an evolutionary edge critical for human survival, Krause said.

«Language is a more sophisticated way to pass on knowledge to the next generation,» he said. «You live like an infant if you do not learn.»

Research shows Neanderthals may have talked 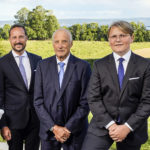