A view of is seen through the window of Israeli flag carrier El Al airliner carrying a delegation of Israeli and American officials before the plane lands in Abu Dhabi, United Arab Emirates August 31, 2020. Foto: Nir Elias / REUTERS / NTB scanpix

This week, we witnessed a symbol of perhaps the greatest step forward in world peace for decades. The first-ever direct passenger flight from Israel to the United Arab Emirates flew down the length of Saudi Arabia’s airspace. After Egypt in 1979 and Jordan in 1994, the UAE has become the third Arab state to normalise relations with the State of Israel under the new Abraham Accord.

Next month, the 2020 Nobel Peace Prize winner will be announced in Oslo. Will it go to the architects of the Abraham Accord, a momentous achievement in itself, and also a major development in a regional geopolitical realignment that is not only good for peace and prosperity in the Middle East but in the world? We knew what the answer would be to that question even before it arose. (Those who point out the deadline for 2020 nominations has passed need not expect to see it in 2021 either.)

Mohammed bin Zayed Al Nahyan, Crown Prince of Abu Dhabi, might well have caught the eye of the Nobel selectors, but unfortunately his partners in this enterprise are US President Donald J. Trump and Israeli Prime Minister Benjamin Netanyahu. Both are despised figures for the wokerati in Oslo and the fellow travellers they are desperate to impress. Compared to the perceptions of these leaders among the hard left who dominate all discourse on «peace», their achievements on the world stage are irrelevant.

Their fingerprints on the Abraham Accord ensured it also received a cool reception in much of the US and international media and in the chancelleries of Europe — more closely aligned with the hostile and backward-looking regimes of Iran, Turkey and Qatar than with those who actually strive for peace and progress and human rights in the Middle East; «the men in the arena», to borrow from former US President Theodore Roosevelt.

Yet, the developing relationship between Israel and the UAE is at least as significant as the peace treaty between Israel and Egypt that deservedly led to Nobel Peace Prizes for Menachem Begin and Anwar Sadat. It paves the way for further leaps forward, with potential for similar normalisation between Israel and other countries in the region such as Bahrain, Oman, Sudan, Morocco and even Saudi Arabia. The UAE would not have acted without Saudis’ blessing. Although publicly understated, the opinion in Riyadh is clear. Some months ago, in talks with leaders there as part of a delegation from former Canadian Prime Minister Stephen Harper’s Friends of Israel Initiative, together with their Executive Director and former Spanish National Security Adviser Rafael Bardaji, I heard firsthand how open the Saudis were to the prospect of embracing Israel in the future.

Behind the shifting geopolitical sands in the Middle East lies economic advantage as opportunities for trade and technology become both clearer and, for the Gulf states, more acutely needed. Of far greater significance, however, is the looming threat to the region from Iran and, to a lesser extent, Turkey. Most Arab countries see common interests with Israel in the face of the mullahs in Tehran with their imperial aggression in Lebanon, Syria, Iraq, Yemen and beyond, coupled with insatiable nuclear ambition.

Former US President Barack Obama unwittingly helped bring about the growing closeness between Israel and the Arabs by his efforts to transfer hegemony in the Middle East to Iran, most frighteningly by his deeply flawed nuclear deal — the JCPOA — that opened the door wide to a nuclear-armed theocratic dictatorship. In the process, he released vast funds to Tehran that helped finance their proxy terrorism across the region. It is more than probable that the hapless Nobel committee would have awarded President Obama a Peace Prize for the JCPOA had they not already fallen over themselves to bestow it on him as soon as he became president in 2009, in a political message that was as much about denigrating former President George W Bush as it was about honouring its recipient. 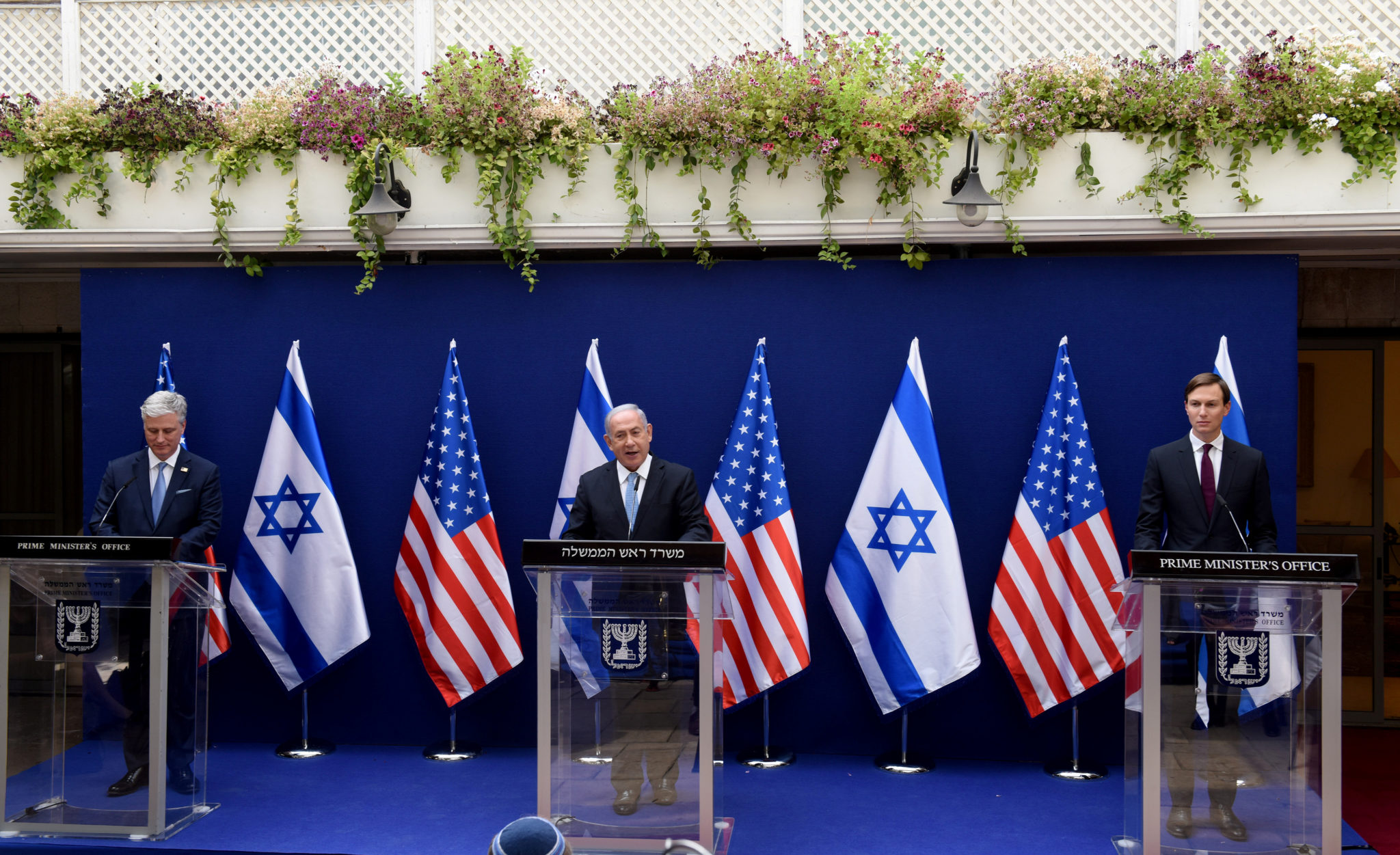 Notwithstanding the economic, technological and security imperatives that lie behind the evolving Middle East relationships, great credit must go to the men behind the Abraham Accord. Effective peace-making, especially in the context of such long-running hostility, demands vision, boldness and above all courage. Let us not forget the bloody end of two of the Middle East leaders who risked all for peace — Anwar Sadat and his fellow Nobel Peace Prize winner Yitzhak Rabin. Mohammed bin Zayed is in a different situation to Sadat, as is Benjamin Netanyahu to Rabin, but nevertheless both know only too well that such actions carry with them serious risks to themselves personally and to their nations.

Prime Minister Netanyahu has long pursued a bold strategy aimed at achieving closer relationships across the region. Among many other under-the-radar efforts by his officials and him, Netanyahu and Yossi Cohen, head of Mossad, reportedly met Mohammed bin Zayed in secret in Abu Dhabi in 2018. One of the main planks of the Abraham Accord is Israel’s agreement to put on ice its plans to apply lawful Israeli sovereignty to 30% of Judea and Samaria. Without that sovereignty plan being floated, which itself required courage and represented historic change for the State of Israel, it is unlikely the current deal would have been achieved. For Netanyahu to agree to its suspension demanded the courage to risk significant political capital at a precarious moment.

The sovereignty plan itself arose from President Trump’s «Peace to Prosperity» initiative, which sought to unlock a century-long Middle East conflict. Decades of peace-processing according to long-held conventional wisdoms had led nowhere. I discussed the Peace to Prosperity proposal with some of its architects right at the start, when it was clear that they hoped to actuate exactly the situation that is now unfolding.

They knew that failure of past peace plans had been due above all to handing the Palestinian Arab leadership a veto over all progress. Whatever they said publicly or to negotiators, successive Palestinian leaders had no intention of arriving at any conclusion that involved a sovereign Jewish state in the Middle East. They did not want a two-state solution if one of those states was run by Jews; hence they refused to compromise and would only reject and disrupt. The Trump initiative envisaged an Israel more closely united with the Arab world in order to impel the Palestinians into a future accommodation. This vision may not actually be realised in the long-term but it has a better chance of success than repeatedly doing the same thing over and over again and expecting a different outcome.

Self-evidently, advancing such a plan carries great risks for President Trump and the US, as well as Israel and the other countries involved, but it also holds out the prospect of great rewards in both peace and prosperity. European leaders and many in the US were lukewarm: they simply did not understand what Trump and his team did understand — the intrinsic paradox of international strategy. As the historian Edward N Luttwak put it in his masterwork, Strategy, The Logic of War and Peace: «The entire realm of strategy is pervaded by a paradoxical logic of its own, standing against the ordinary linear logic by which we live in all other spheres of life». The Europeans and other opponents of Trump’s plan mostly failed to recognise that the linear logic with which they were comfortable could result only in endless conflict; and many who did lacked the courage to embrace the strategic paradox with all its inherent risks.

Of course the heavily politicised Nobel Peace Prize committee know none of this and apparently do not want to. For years now, their decision-making has been based not on objective contributions to peace but on a left-leaning, globalist world view. Why else would they have awarded a prize to the European Union for the advancement of peace in Europe while knowing full well that peace has been maintained in Europe since 1945 because of NATO, not the EU? Why else would they have awarded a prize to arch-terrorist Yasser Arafat and seriously considered the same for Provisional IRA leader Gerry Adams? Or to North Vietnamese communist war-leader Le Duc Tho? The list goes on.

We are fortunate that the true leaders of today understand how breathtakingly unimportant are both the Nobel Committee and the EU. For all their self-importance, both groups, sadly, end up shaming themselves and working against peace, prosperity and human rights.

Colonel Richard Kemp is a former British Army Commander. He was also head of the international terrorism team in the U.K. Cabinet Office and is now a writer and speaker on international and military affairs.