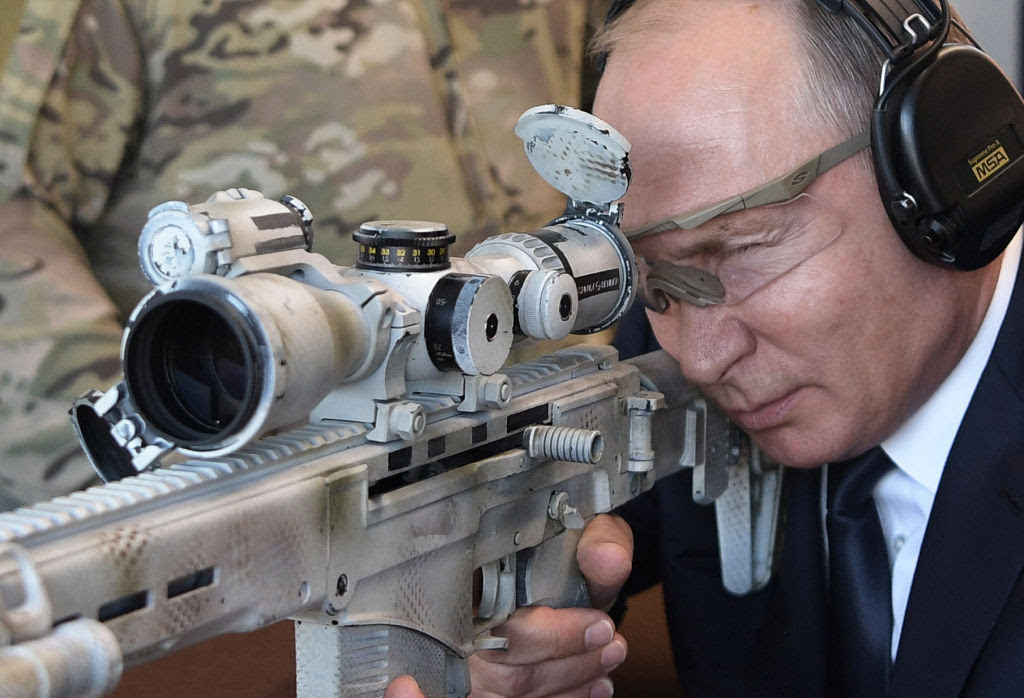 Russian President Vladimir Putin looks through the scope as he shoots a Chukavin sniper rifle (SVC-380) during a visit to the military Patriot Park in Kubinka, outside Moscow, on September 19, 2018. (Photo by Alexey NIKOLSKY / SPUTNIK / AFP) (Photo credit should read ALEXEY NIKOLSKY/AFP via Getty Images)

Although Russia is no longer the superpower it was during the days of the Soviet Union, when it posed a genuine threat to U.S. interests around the world, the Kremlin under President Vladimir Putin still manages to exploit opportunities in Africa and Latin America that threaten to diminish U.S. influence. To this end — to extend its power to regions beyond its borders and limited resources — Moscow established the Wagner Group.

The Wagner Group masquerades as a private commercial enterprise, but it is actually a mercenary arm of the Russian Defense Ministry, run by a long-time Putin associate, the oligarch Yevgeny Prigozhin. A paramilitary organization that enjoys technical support from the Russian Army — receiving armor, artillery and rocket systems — the Wagner Group may receive direct orders from the Main Directorate of the General Staff of the Armed Forces of the Russian Federation (GRU), the institutional successor to the old Soviet KGB spy organization, in which Putin was a career officer.

Many Wagner Group operatives are former members of Russian Spetsnaz (special forces) units. The founder of the Wagner Group, Dmitry Utkin, is a retired Lieutenant Colonel in a Spetsnaz unit attached to the GRU. Utkin, in fact, along with several of his comrades-in-arms, were among the «little green men» who invaded Ukraine’s Crimean Peninsula in February 2014.

The Wagner Group’s paramilitary troops receive training from Russian Army drill instructors at the Molkino camp in southwest Russia. Following Moscow’s annexation of the Crimea, many Wagner Group operatives moved on to the pro-Russian Ukrainian enclaves of Donetsk and Luhansk, where they continue to fightalongside ethnically Russian Ukrainian separatists.

It is in Syria, however, where the Wagner Group achieved its greatest notoriety. Prigozhin, with Putin’s support, orchestrated an official arrangement according to which Wagner Group assets would assist Syrian President Bashar al-Assad regain control of the country from rebel groups and al Qaeda and ISIS terrorists. The Wagner Group’s agreement with Damascus eventually resulted in thousands of Russian paramilitary forces being deployed to Syria.

Wagner Group troops fought valiantly against ISIS, helping Damascus regain vast swaths of Syrian territory. All the same, Wagner Group field commanders, perhaps over-confident after their battlefield successes, overreached. On February 7, 2018, they attacked a base held by a joint Syrian Democratic Forces (SDF)-U.S. military contingent, which was guarding a natural gas field in Deir-es-Zor near the village of Qasham. When U.S. pilots employed their AC-130 ground-attack gunships against them in that operation, Wagner Group units were decimated.

Subsequently, U.S. Secretary of State Mike Pompeo claimed that hundreds of Russians had been killed by the U.S. in the battle. After this defeat by American troops, Wagner Group fighters joined the Syrian regime’s efforts to reclaim Idlib, the last of its territory in rebel hands.

Of equal, if not greater, significance are the Wagner Group’s lower-profile deployments on Moscow’s behalf – such as in Venezuela, where its forces provided security for the dictator, Nicolas Maduro, and in Sudan, where it may have helped prolong the genocidal regime of the since-ousted ruler, Omar al-Bashir, by coaching his enforcers in anti-government protest-suppression.

Nevertheless, the Wagner Group survived al-Bashir’s ouster, and is now hoping to finalize contracts with Sudanese petroleum and gold companies. The group’s interest in securing shares of client countries’ raw materials is also part of the reason for ensconcing itself in Libya, currently still undergoing a civil war.

Putin has pledged support to rebel leader General Khalifa Haftar and his Libyan National Army (LNA), in his effort to overthrow the UN-recognized government in Tripoli.

One motivation for Putin’s support for Haftar’s rebel army may be Moscow’s desire to gain access to Libya’s oil wells, almost all of which are under Haftar’s control.

Some reports suggest that the Wagner Group has dispatched hundreds of recruits to Libya, and that the Russian Defense Ministry has been delivering spare partsfor Russian warplanes and helicopters to Haftar’s air force.

The Kremlin also has not hesitated to assist the Wagner Group to interfere in the election process of at least two other African countries, the Comoros and Madagascar. In the Comoros, Wagner Group activists sought to sully the island’s close diplomatic relations with France. In Madagascar, reports suggest, several Russian businessmen associated with the Wagner Group’s CEO seem to have supported the candidacy of Andry Rajoelina by bribing several first-round candidates to drop out of the race. Shortly after assuming office, President Rajoelina openly welcomed the Wagner Group’s continued presence in Madagascar.

The ideology that binds the Wagner Group with the Russian state is ethnic-Slavic exceptionalism. Putin’s not-so-secret embrace of the group, however, goes beyond ethnic identity. The Wagner Group provides Putin with an aggressive force to safeguard his interests, while allowing him plausible deniability in the event of a confrontation with Washington. Nonetheless, senior members of the U.S. military remain concerned about the group’s involvement in sensitive locations around the world. One hopes the White House is listening.

Dr. Lawrence A. Franklin was the Iran Desk Officer for Secretary of Defense Donald Rumsfeld. He also served on active duty with the U.S. Army and as a Colonel in the Air Force Reserve.