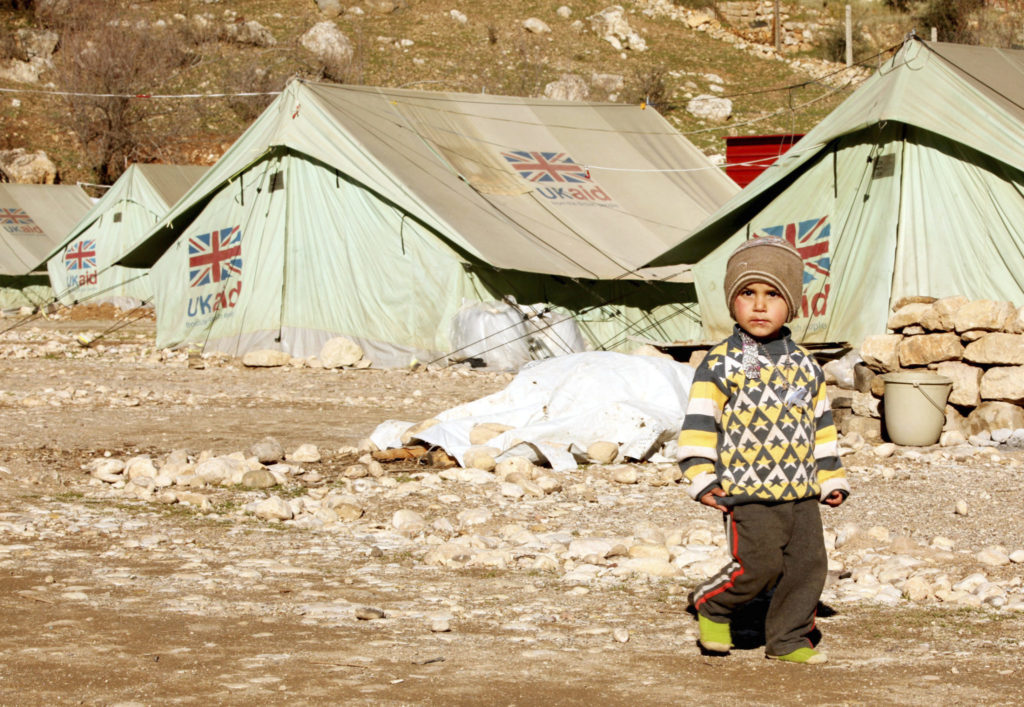 A displaced boy from the minority Yazidi sect walks in a refugee camp in Shikhan January 19, 2015. Islamic State has hounded ethnic and religious minorities in northern Iraq since seizing the city of Mosul in June, killing and displacing thousands of Christians, Shi’ite Shabaks and Turkmen who lived for centuries in one of the most diverse parts of the Middle East. Hundreds of Yazidi women and girls have been captured, raped and tortured, and forced to convert to Islam and marry Islamic State followers, according to rights groups. The Yazidi are a religious sect whose beliefs combine elements of several ancient Middle Eastern religions. Tens of thousands have fled Islamic State fighters, who say the Yazidi must embrace their radical version of Islam or die. REUTERS/Ari Jalal

The British government appears recently to have decided that it would like to give the impression that it cares about persecuted Christians. Prime Minister Theresa May saidin Parliament on July 18:

«As a Government we stand with persecuted Christians all over the world and will continue to support them. It is hard to comprehend that today we still see people being attacked and murdered because of their Christianity, but we must reaffirm our determination to stand up for the freedom of people of all religions and beliefs and for them to be able to practise their beliefs in peace and security.»

The British Government even recently appointedits first Special Envoy on Freedom of Religion or Belief with Lord Tariq Ahmad of Wimbledon, a former minister, filling the post. According to the government, the role «will promote the UK’s firm stance on religious tolerance abroad, helping to tackle religious discrimination in countries where minority faith groups face persecution».

Prime Minister May saidshe looked «forward to supporting [Lord Ahmad] in this new role as he works with faith groups and governments across the world to raise understanding of religious persecution and what we can do to eliminate it.»

Perhaps the UK should not be so quick to preach to others, when it does not appear to be doing much at home to help Syrian Christians, who have been among the most persecuted for their faith since the civil war in Syria began seven years ago:

Accordingto information obtained from the UK Home Office by the Barnabas Fund, the UN High Commissioner for Refugees (UNHCR), during the first quarter of 2018, recommended 1,358 Syrian refugees for resettlement in the UK, of which only four refugees were Christians (no Yazidis were recommended). The Home Office agreed to resettle 1,112 of these refugees, all of whom were Muslims, and refused to accept the Christians.

This decision was made despite the fact that approximately 10%of the pre-2011 population of Syria was Christian – a number that has reportedlyfallen to 5%. There were also an estimated 70,000 Yazidisin Syria. Yazidis, with Christians, were among the groups most viciously targeted by ISIS in Syria and Iraq. In 2017, moreover, accordingto the Barnabas Fund, the UNHCR recommended 7,060 Syrian refugees for resettlement in the UK, of whom only 25 were Christians and seven were Yazidis. The Home Office ended up accepting 4,850 Syrian refugees – of whom only 11 were Christians.

While the UK appears to favor Muslim refugees over Christian ones, the fault does not lie with the UK alone. Lord David Alton of Liverpool, a life peer in the House of Lords, wrotein a letter to Home Secretary Sajid Javid:

«There is widespread belief, justified or not, among the religious minorities of Syria that the UNHCR is biased against them. The UK has a legal obligation to ensure it does not turn a blind eye to either direct or indirect perceived discrimination by the UN.

«It is widely accepted that Christians, who constituted around 10 per cent of Syria’s pre-war population, were specifically targeted by jihadi rebels and continue to be at risk.

«…As last year’s statistics more than amply demonstrate, this is not a statistical blip. It shows a pattern of discrimination that the Government has a legal duty to take concrete steps to address.»

In December 2016, Nina Shea, Director of the Center for Religious Freedomof the Hudson Institute,asked the UN’s High Commissioner for Refugees at the time, António Guterres, to explain the disproportionately low number of Syrian Christians resettled abroad by the UN. «Mr. Guterres said that generally Syria’s Christians should not be resettled, because they are part of the ‘DNA of the Middle East,'» writes Shea.

Guterres’ statement was a blunt admission of the UN’s apparent disregard for Christian lives, not least because only 9 months earlier, in March 2016, US Secretary of State John Kerry had said, «(ISIS) is responsible for genocide against groups in areas under its control including Yazidis, Christians and Shiite Muslims». The UN itself statedin September 2005:

The apparent discrimination against Christians by the United Kingdom and the UNHCR is all the more disturbing in light of studies that find Christians to be the most persecuted faith in the world. Christians are«the most widely targeted religious community, suffering terrible persecution globally», according to a 2017 studyby the University of Notre Dame’s Center for Ethics and Culture, the Religious Freedom Institute and Georgetown University’s Religious Freedom Research Project. In June, the ninth annual Pew Research Center reporton global religious restrictions also found that Christianity was still the world’s most persecuted faith, with Christians being harassed in more countries (144) than any other group.

In light of these facts, it would certainly appear, as Lord Alton states in his letter, that the UK has indeed been «turning a blind eye» to the plight of Christian (and Yazidi) refugees for several years. Now that May has announced that her government stands with persecuted Christians all over the world, the question remains: What specific initiatives, other than empty words, does the UK government aim to take to rectify the damage that has already been done and to prevent further damage?

UK: Discrimination against Christian Refugees
by Judith Bergman
August 6, 2018 at 5:00 am
https://www.gatestoneinstitute.org/12796/britain-christian-refugees