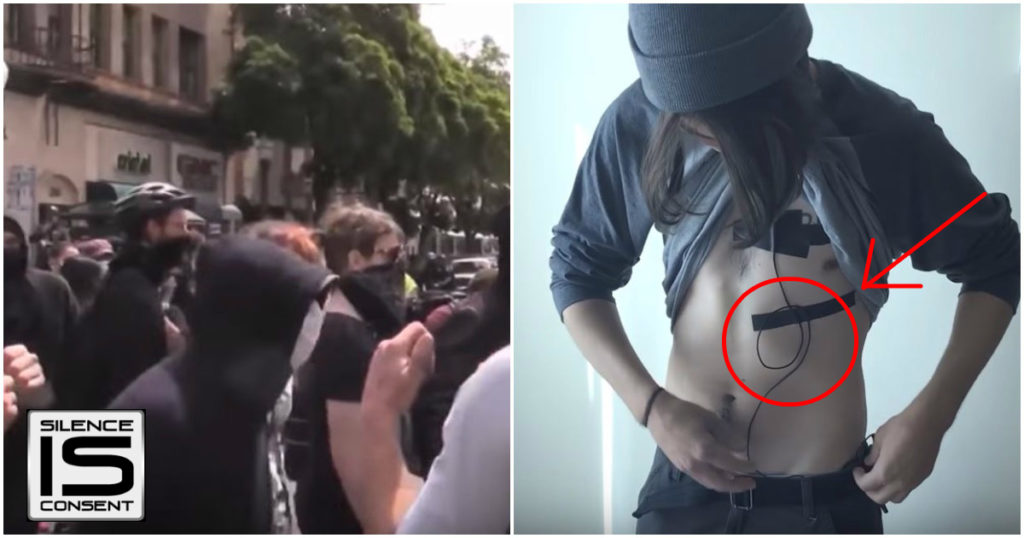 “You’re going to take the knife—and we’ve got 2 AK’s coming,” said one Antifa member. “The idea is plain clothes and hard tactics. I don’t think they’ll know what hit them, because they’re not prepared for what we’re planning.”

Many Americans have grown increasingly concerned over the virtual media blackout on Antifa’s domestic terrorist activities. Only through the alt-media has the mainstream been forced to cover them, and even then, it’s only a lip service—but in this groundbreaking new video, the word “Antifa” may now be set to become a common household name.

Steven Crowder was the last that many would expect to infiltrate the rogue “anti-fascist” organization. The quirky comedian is known for his controversial political commentary, on the podcast which he hosts, “Louder With Crowder,” so when he recently released this undercover video of Antifa, many were surprised.

“Why did it take two late night hosts—Comedians—to find this out?” Crowder asked a media official, after showing him indisputable evidence of Antifa’s wrong-doings. “You know I wish you the best of luck,” the man says—and then just like that, he walks away.

This video documents nearly everything, as Crowder went undercover in a massive two week operation, infiltrating a local Antifa cell. He exposes their tactics, how they coordinate, their communication methods, and most importantly, how the media is completely turning a blind eye to what they’re doing.

“Protests, violence, riots, calling everyone a Nazi—this is the M.O. of Antifa. We’ve all seen it, but the media, politicians, and academia all defend, deflect, or completely deny,” he says. “What we saw were some brave people risking their lives!” said one CNN interviewee, in reference to the far left riots. “The Antifa movement is interested in preserving the fabric of America!” said another.

“Why is that?” asks Crowder, wondering why the media seems to be completely united in their crusade against the alt-right. “How deep does their organization go? What’s their end game?” he asks. For several months, he meticulously infiltrated Antifa, which according to him has begun upping their vetting process.

“In order to get in with the Antifa crowd, we had to infiltrate their private groups. After news broke that they were officially classified as a domestic terrorist organization, they pulled everything in much closer to the chest. They started vetting people, becoming paranoid about spies, demanded we meet with them in person, installing their cryptic messaging app onto our phone,” Crowder says.

It’s important that we understand Antifa’s tactics, but we must first understand that they’re in a PR battle. What they claim on the media, and what they actually do in person, are two completely different things. On the surface, the organization claims that they’re fighting fascism, supporting our freedoms, and trying to eradicate hate in this country…but the undercover videos tell a different story.

“Did you bring your gun?” a woman asked at an Antifa meeting. “I have…a regular rifle and an assault weapon, and a sawed-off style shot gun,” the man responded. The leader replied by saying that she had a handgun, and “two AK’s coming.”

It turns out that police have been tracking this “pan-sexual, transgender queer” for a while, and were grateful for the footage—but the media on the other hand, wanted nothing to do with it.

“You just saw correctly—even being shown the footage in the presence of police officers to confirm authenticity, they walked away,” he said in reference to Matt McDonald of Fox 13 News. Another media host, Dan Harris from ABC’s Nightline, turned down the footage.

“We were delivering a story to local and national news on a silver platter, which included infiltration, violence, and exposing the roots of a national domestic terrorist organization—and NO ONE even wanted to even give it a GLIMPSE? Not one person? It didn’t even get mentioned!” Crowder says.

He ends the video with some sobering remarks, pointing out that the left has been normalizing violence against conservatives for too long. “If they call Ben Shapiro or me a Nazi, what does that make you? If they justify violence against someone with an iPhone camera, what can they do to you?”

This is EXTREMELY important information—please share it with as many people as you can to raise awareness about the growing threat of Antifa. Thank you and God bless!