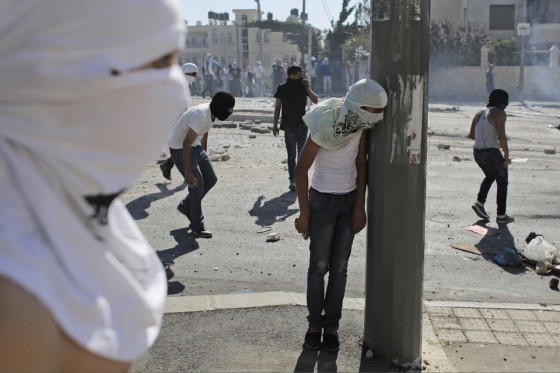 Jerusalem: A Palestinian stone-thrower takes cover behind a street pole during clashes with Israeli police in Shuafat, an Arab suburb of Jerusalem, July 3, 2014. Israel faced a second day of violent Palestinian protests in Jerusalem on Thursday after the discovery of the body of a 16-year-old Palestinian boy on Wednesday in a forest near the city. Police clashed with a few dozen stone-throwing Palestinians in Shuafat, but the violence was on a much smaller scale than on Wednesday. REUTERS/Ammar Awad –

Mahmoud Abbas and his Palestinian Authority (PA), preparing to welcome U.S. President Donald Trump to Bethlehem, are seeking to create the impression that their sentiments are shared by their people. Yet many Palestinians are less than enthusiastic about the visit.

It is in the best interests of Abbas and the PA to hide the truth that many Palestinians view the U.S. as an Israel-loving enemy.

While the PA president and his aides attempt to bury that inconvenient fact, they are also doing their best to cover up the truth that many Palestinians have been radicalized to a point that they would rather aim a gun or knife at Israelis than aim for peace with them.

The strongest and most vocal protests against Trump’s visit have thus far come from Ramallah, the de facto capital of the Palestinians.

Ramallah is regularly described by Western journalists as a base for moderation and pragmatism. It is in this city that Abbas and the top PA leadership live and work.

In a statement published earlier this week, the National and Islamic Forces in Ramallah and El-Bireh, a coalition of various Palestinian political and terror groups, called for a «Day of Popular Rage» in the West Bank to protest the imminent presidential visit.

In Palestinian-speak, a «Day of Rage» is a call for intensified violence and terrorism directed mainly against Jews.

The term was formally introduced during the First Intifada, which erupted in late 1987, and consisted of stone and petrol-bomb attacks against Israel Defense Force soldiers and Jews residing in the West Bank and the Gaza Strip.

Similarly, during the Second Intifada, which began in 2000, Days of Rage were associated with suicide bombings, drive-by shootings and other acts of terrorism and assorted crimes perpetrated against Jews living in the West Bank and Gaza Strip, as well as within Israel.

In recent years, Abbas’s Fatah faction and other groups, including Hamas, Islamic Jihad and the Marxist Popular Front for the Liberation of Palestine (PFLP) have used different occasions to urge Palestinians to declare a Day of Rage against Israel.

Generally speaking, such calls come in response to Jewish visits to the Temple Mount — visits that have been taking place since East Jerusalem was liberated from Jordanian occupation in 1967.

The visits were temporarily suspended, however, for security reasons in the first years of the Second Intifada, out of concern for the safety of visitors. It is worth noting that non-Muslims are allowed to tour the Temple Mount, as has been true for the past five decades. The Palestinians, however, are specifically opposed to Jews visiting the site, under the false pretext that Jews are plotting to rebuild their Temple after destroying the Islamic holy sites there. This charge is, of course, another Palestinian blood libel against Jews.

So here we are again. Palestinians are calling for marking Trump’s visit with a Day of Rage (read: heightened terrorism). The statement issued by the National and Islamic Forces in Ramallah and El-Bireh is a clear and direct invitation to Palestinians to take to the streets and mow down Jews.

What is really driving this Palestinian hatred of Trump and the U.S.?

From the Palestinian point of view, were it not for the U.S., the Palestinians and the Arabs would have succeeded long ago in achieving their goal of destroying Israel.

«We reject American bias in favor of Israel,» read the statement. «We call for popular marches and rallies to affirm our people’s adherence to their legitimate rights, including the right of return and self-determination.» The statement also warned against U.S. pressure on Abbas and the PA leadership to return to the negotiating table with Israel.

The so-called «right of return» demanded by Palestinians means the right to flood Israel with millions of Palestinians, in order to create an Arab-majority state where Jews would live as a minority. This would come in addition to the creation of another Palestinian state alongside Israel in the West Bank, Gaza Strip and East Jerusalem.

The Palestinians and the Arabs have long been at war with what they regard as U.S. bias in favor of Israel. What they mean is that U.S. support for Israel stands in their way of destroying Israel. They are saying: Only if Americans would stop supporting Israel financially, militarily and politically, we would be able to remove Israel from the face of the earth.

Neither Trump nor any members of his entourage is likely to notice the latest Palestinian Day of Rage. The strict, unprecedented security measures surrounding Trump’s planned visit to Bethlehem, and the fact that the stop is to last for only for 45 minutes, will make sure of that. Trump will not see Palestinians protesting against his visit. Nor will he see, during his visit, Palestinians closing their businesses and hurling stones and petrol bombs at Jews.

Trump’s Palestinian hosts will do their utmost to disguise many unpleasant truths. For instance, they probably will not mention that Palestinians are taking to the streets to protest his visit as well as to go after Jews. Abbas is not going to tell Trump about the Day of Rage because it flies in the face of his repeated claim that Palestinians are ready for peace and are even raising their children in a «culture of peace.»

The Palestinian Day of Rage during Trump’s visit is a further sign of the increased radicalization among Palestinians and their unwillingness to accept Israel’s right to exist as a state for Jews. Days of Rage are far from contained responses to particular Israeli policies or actions on the ground. The Day of Rage can be traced to the Arab and Muslim world with the establishment of Israel in 1948, and continues to be used by Arabs and Muslims as a tool of terrorism.

In truth, such days are an expression of rage over the presence of Jews in a sovereign state in the Middle East, and of wrath over U.S. support for Israel and of Palestinian support for Hamas, Islamic Jihad and other terror groups. Days of Rage will continue as long as Palestinians continue to believe that Israel can and should be destroyed.

Once again, Abbas is playing Americans and other Westerners for fools. His people remain unwilling to recognize Israel’s very right to exist. And so, Abbas will talk peace and coexistence while his people organize yet another Day of Rage.

Bassam Tawil is a scholar based in the Middle East.

Palestinians: Tomorrow’s Secret ‘Day of Rage’
by Bassam Tawil
May 21, 2017 at 10:00 am
https://www.gatestoneinstitute.org/10393/palestinians-trump-rage