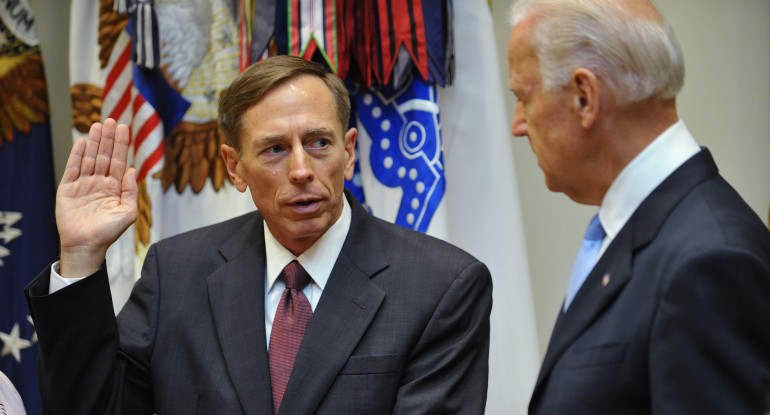 [I am] increasingly concerned about inflammatory political discourse that has become far too common both at home and abroad against Muslims and Islam, including proposals from various quarters for blanket discrimination against people on the basis of their religion.

Petraeus doesn’t just oppose what Trump now characterizes as “just a suggestion“ solely as a policy measure. Petraeus is saying that such proposals shouldn’t even be made; that just to speak them is damaging:

[T]he ramifications of such rhetoric could be very harmful — and lasting.

He feels simply speaking such thoughts may:

… compound the already grave terrorist danger to our citizens.

How will these words do that? Well, you see:

[T]hose who flirt with hate speech against Muslims should realize they are playing directly into the hands of al-Qaeda and the Islamic State. The terrorists’ explicit hope has been to try to provoke a clash of civilizations — telling Muslims that the United States is at war with them and their religion. When Western politicians propose blanket discrimination against Islam, they bolster the terrorists’ propaganda.

Petraeus doesn’t offer any alternative suggestion as to how jihad terrorists can be prevented from entering the United States. He just doesn’t like Trump’s former proposal, and what he terms “hate speech against Muslims” in general, because he says it will enrage Muslims and make more of them join the jihad against America. So the upshot of Petraeus’ argument is that we must not say things to which Muslims might object, because this will just make more of them become jihadis.