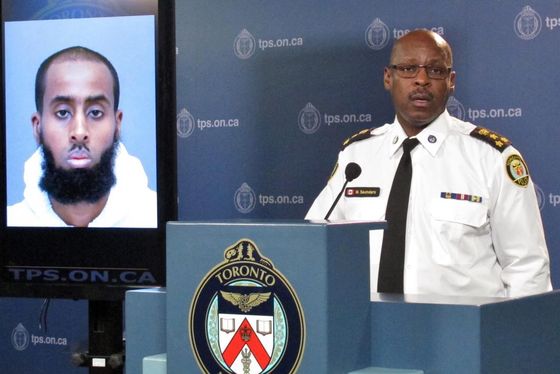 Chief Mark Saunders speaks at a news conference in Toronto on Tuesday, March 15, 2016 about the attack on two Canadian soliders at a recruitment centre in the city’s north end on Monday. Police say a 27 year-old Canadian man, Ayanie Hassan Ali, said, Allah told me to come here and kill people at a double stabbing at a military recruitment center in Toronto. The suspect will appear in court later Tuesday to face charges. (Colin Perkel/The Canadian Press via AP)

Ayanie Hassan Ali faces attempted murder charges after he attacked two soldiers with a knife on Monday, according to CNN.

“‘Allah told me to do this. Allah told me to come here and kill people,’” the suspect said, according to Saunders. The police chief went on to explain that the slashing could be categorized as an act of terrorism “because of certain comments that were made,” but that in order to charge Hassan Ali with terrorism “there needs to be more support.”

The suspect struck a master corporal sitting behind a table at the recruiting center and slashed him on the upper arm with his knife. He attempted to then stab a female service member, but she escaped, police said. He then walked to the back of the center where he stabbed a second man as troops subdued him. Both soldiers were released from the hospital.