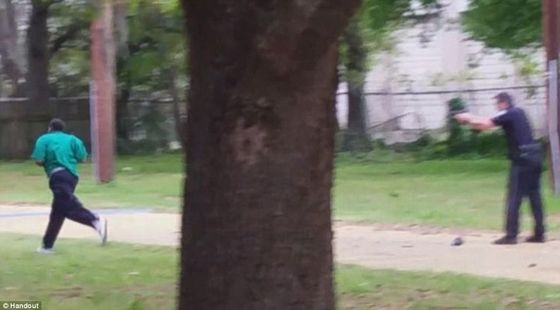 Slager was charged with murder on Tuesday and could face the death penalty after the incendiary footage emerged.

The officer had previously defended his actions, saying he feared for his life after Scott wrestled his Taser from him during a scuffle.

However, the footage shows Scott getting around 15 to 20 feet away before Slager opens fire with seven shots in quick succession followed by an eighth. Three of them missed.

Slager then handcuffed Scott’s lifeless body and moved an object – possibly the Taser – from where it fell to the ground some 30ft away and placed it next to the victim.

The killing comes at a time of mounting unrest over police use of force – particularly against black men – after violent protests erupted over the killing of unarmed teenager Michael Brown in Ferguson, Missouri last summer.

The footage began rolling in a vacant lot apparently moments after Slager fired his Taser.

Slager claimed he tried to Taser the victim during the scuffle, but said Scott managed to wrest the stun gun away, prompting him to draw his pistol.

At that point, the officer said he fired at Scott several times, saying he ‘felt threatened’ by the Coast Guard veteran.

At no point in the video, which does not show the initial contact between the men, does Scott appear to be armed.