Last week, U.S. Vice President Joe Biden had to zigzag between the truth that accidentally spilled out of him and Washington’s pragmatism. In a speech at Harvard’s Kennedy School of Government, Biden said: «[Turkish] President (Recep Tayyip) Erdogan, he is an old friend, said you were right, we let too many people through, now we are trying to seal the border.»

The «people,» however, whom Erdogan said Ankara had «let through» were the jihadists whom Turkey had supported with arms and money, and who have now become an international nightmare.

In other words, the U.S. vice president was publicly saying that the Turkish president had confessed to supporting terrorists.

Then Erdogan threatened: «If he [Biden] really said that, he would become history for me.» Finally, a White House statement announced: «The vice president apologized for any implication that Turkey or other allies and partners in the region had intentionally supplied and facilitated the growth of ISIL or other extremists in Syria.»

Erdogan has never hidden that he is ideologically a next of kin to the Muslim Brotherhood and Hamas. Hamas’s overseas command center happens to be based in Turkey. Erdogan has been Hamas’s staunchest (non-Hamas) cheerleader in the last decade, and the Brotherhood’s key regional ally. Press reports say that Turkey has recently welcomed in the Brotherhood’s top brass, who were expelled on Sept. 13 from their five-million-star hotels in Qatar. Ankara has not denied that it is offering a safe haven to the leaders of the Islamist organization.

In short, to finish off the jihadists who have captured large swathes of land in Iraq and Syria, Washington will now work with the man who until recently funded and reinforced these same jihadists (and their various offspring) and is proud of his love affairs with Hamas and the Brotherhood. More ironically, a U.S.-led coalition of nations including Arab states recently killed one of Erdogan’s heroes when the coalition forces struck an ISIS camp in Syria.

Turkish tanks near the border with Syria, October 2014.
When, in 2010, a Turkish-led flotilla that included the ship Mavi Marmara sailed towards Gaza to «break Israel’s siege» of the Hamas-controlled land, Erdogan greeted everyone on board as «heroes.» And when the Israel Defense Forces [IDF] raided the Mavi Marmara and killed nine Turks aboard, Erdogan greeted the Turks as «martyrs.»

Since then, Erdogan has vehemently denied any Turkish governmental support for the Mavi Marmara. He claims he was merely objecting to «Israel’s unjust oppression of the Palestinians.»

But, he insists, no governmental involvement at all.

About a fortnight after the incident, members of the foreign press in Turkey received a package from the Press and Information General Directorate, a government office reporting to Erdogan. The envelope did not contain a letter, or an explanatory note. Instead, its only content was a DVD, the cover of which showed a photomontage of an Israeli soldier pointing a rifle at a vessel. The vessel was encircled in David’s Star. The DVD cover read: «Moments of Horror.» The line below that read: «Interviews With the Injured Aboard the Aid for Gaza Ship / With English Subtitles.»

As the package arrived, the radio was still quoting Erdogan and his ministers as saying that the flotilla was entirely a nongovernmental initiative.

The Mavi Marmara incident was a wake-up call to Jerusalem, where diplomats had earlier been unrealistically optimistic about building a working relationship with Erdogan despite several other, earlier, warnings, including Erdogan’s famous tirade in Davos against (then) Israeli President Shimon Peres that, «You (Jews) know well how to kill!» The Turkish government has since frozen ambassadorial-level diplomatic relations between Turkey and Israel, and Erdogan has increased his calculated explosive rhetoric against Israel.

Erdogan’s principal argument was that a foreign military had killed Turkish nationals outside of Turkey; that those who were killed were martyrs; and that he would never allow a foreign military to harm one single Turkish citizen. Once again, he was wrong. 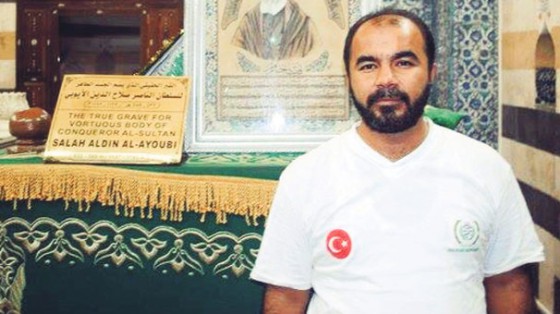 One of the lucky survivors of the Mavi Marmara was Yakup Bulent Alniak (photo), an Islamist activist for the Turkish «humanitarian aid group» IHH which organized the Gaza-bound flotilla. IHH is listed by many Western countries as a terrorist organization; but its members, including Alniak, were simply heroes for Erdogan.

Alniak survived the IDF raid in 2010 but lost his life recently, at the end of September, when a U.S.-Arab coalition struck one of the largest ISIS camps in Syria. A coalition of foreign armies had killed a Turkish citizen whom the Turkish leader had declared a hero, but since then Erdogan has remained mute.

Will Erdogan downgrade Turkey’s diplomatic ties with the U.S. and five Muslim nations because their militaries killed a Turkish citizen outside of Turkish territory? No. Probably because, in the pragmatic Islamist thinking, one does not properly qualify as a «martyr» if he gets killed by an army (or armies) other than Israel’s.

As of this writing, on the Turkey-Syria border, CNN correspondent Phil Black hourly beams pictures of the Syrian Kurdish city of Kobani, with a black ISIS flag atop a building in the eastern part of the city, as Turkish soldiers in tanks lined up along the Turkish border «observe» ISIS troops close in for the approaching massacre.

Washington is expecting Ankara wholeheartedly to fight the rougher boys of the Islamist camp to which it belongs? Good luck.

Who Does Turkey Support?