The couple claimed the woman, who they saw was wearing a hijab, took offence to the snorting sounds in the song and believed they were a reference to how pork is forbidden in Islam though this has not been confirmed.

She complained to the bus’s driver, who, it is claimed, then told the couple it would be ‘easier’ for them to get off two miles from their home.

‘We were really embarrassed, ashamed and upset and we hadn’t done anything wrong, just trying to make our little girl happy, but people were looking at us as if we had done something wrong.

‘It was humiliating,’ said Mr Branfield.

‘A lady came up to us and quite aggressively started telling us we were irresponsible parents and that we were being racist singing the song.’

‘She went up to the bus driver and told him we were being racist towards her and she wasn’t happy. The driver came up to me and said we had to get off the bus or the police would have to come.

‘He said: ‘just get off the bus – it’s not worth the hassle’. I was really shocked because we had done nothing wrong but he didn’t listen to us. 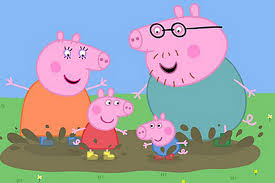