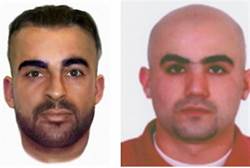 The two were identified as 32-year-old Australian Maliad Farah, also known as Hussein Hussein – a bearded man with dark hair and brownish eyes – and 25-year-old Canadian Hassan El Hajj Hassan – a man of lighter complexion, with a closely shaved head and a goatee.

Bulgaria had already announced that an Australian and a Canadian linked to the military wing of Lebanon’s Hizbullah militant group had aided the Burgas bomber, who was killed at the scene of the attack. The bomber is still unidentified.

The interior ministry said on Thursday the men had been spotted at several Black Sea resorts between June 28 and July 18 last year. Prosecutors suspect them of registering in hotels and renting cars under three fake identities – Brian Jeremiah Jameson, Jacque Philippe Martin and Ralph William Rico.

Two counterfeit U.S. driver’s licenses in the names of Martin and Rico were recovered by police shortly after the attack. Both carrying traces that matched the DNA profileextracted from the remains of the bomber.

The terrorist atrocity is believed to have been one of the contributing factors to the recent decision by the European Union to ban Hizbullah’s «military wing» as a terrorist group.