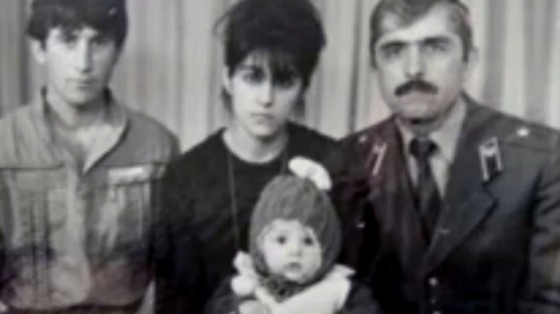 In photos of her as a younger woman, Tsarnaeva wears a low-cut blouse and has her hair teased like a 1980s rock star. After she arrived in the US from Russia in 2002, she went to beauty school and did facials at a suburban day spa.

But in recent years, people noticed a change. She began wearing a hijab and cited conspiracy theories about 9/11 being a plot against Muslims.

Tsarnaeva insists there is no mystery and that she’s just someone who found a deeper spirituality. She fiercely defends her sons — Tamerlan, who was killed in a gunfight with police, and Dzhokhar, who was wounded and captured.

“It’s all lies and hypocrisy,” she told The Associated Press in Dagestan. “I’m sick and tired of all this nonsense that they make up about me and my children. People know me as a regular person, and I’ve never been mixed up in any criminal intentions, especially any linked to terrorism.”

At a news conference in Dagestan with her ex-husband Anzor Tsarnaev last week, Tsarnaeva appeared overwhelmed with grief one moment, defiant the next. “They already are talking about that we are terrorists, I am terrorist,” she said. “They already want me, him and all of us to look (like) terrorists.”

Zubeidat said she and Tamerlan began to turn more deeply into their Muslim faith about five years ago after being influenced by a family friend, named “Misha.” The man, whose full name she didn’t reveal, impressed her with a religious devotion that was far greater than her own, even though he was an ethnic Armenian who converted to Islam.

“I wasn’t praying until he prayed in our house, so I just got really ashamed that I am not praying, being a Muslim, being born Muslim. I am not praying. Misha, who converted, was praying,” she said.

By then, she had left her job at the day spa and was giving facials in her apartment. One client, Alyssa Kilzer, noticed the change when Tsarnaeva put on a head scarf before leaving the apartment.

“She had never worn a hijab while working at the spa previously, or inside the house, and I was really surprised,” Kilzer wrote in a post on her blog. “She started to refuse to see boys that had gone through puberty, as she had consulted a religious figure and he had told her it was sacrilegious. She was often fasting.”

Kilzer wrote that Tsarnaeva was a loving and supportive mother, and she felt sympathy for her plight after the April 15 bombings. But she stopped visiting the family’s home for spa treatments in late 2011 or early 2012 when, during one session, she “started quoting a conspiracy theory, telling me that she thought 9/11 was purposefully created by the American government to make America hate Muslims.”

“It’s real,” Tsarnaeva said, according to Kilzer. “My son knows all about it. You can read on the Internet.”

Zubeidat married into a Chechen family but was an outsider. She is an Avar, from one of the dozens of ethnic groups in Dagestan. Her native village is now a hotbed of an ultraconservative strain of Islam known as Salafism or Wahabbism.

It is unclear whether religious differences fueled tension in their family. Anzor and Zubeidat divorced in 2011.