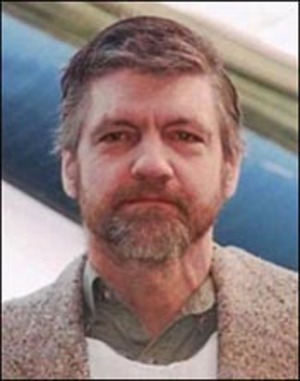 Theodore John «Ted» Kaczynski (pronounced /k??z?nski/; born May 22, 1942), also known as the Unabomber (university and airline bomber), is an American mathematician, social critic, primitivist, and Neo-Luddite[1] who engaged in a mail bombing spree that spanned nearly 20 years, killing three people and injuring 23 others.

Kaczynski was born in Chicago, Illinois, where, as an intellectual child prodigy, he excelled academically from an early age. Kaczynski was accepted into Harvard University at the age of 16, where he earned an undergraduate degree, and later earned a PhD in mathematics from the University of Michigan. He became an assistant professor at the University of California, Berkeley at age 25, but resigned two years later.

In 1971, he moved to a remote cabin without electricity or running water, in Lincoln, Montana, where he lived as a recluse while learning survival skills in an attempt to become self-sufficient.[2] He decided to start a bombing campaign after watching the wilderness around his home being destroyed by development.[2] From 1978 to 1995, Kaczynski sent 16 bombs to targets including universities and airlines, killing three people and injuring 23. Kaczynski sent a letter to The New York Times on April 24, 1995 and promised «to desist from terrorism» if the Times or The Washington Post published his manifesto. In his Industrial Society and Its Future (also called the «Unabomber Manifesto»), he argued that his bombings were extreme but necessary to attract attention to the erosion of human freedom necessitated by modern technologies requiring large-scale organization.