Israel was invaded Sunday.
This time, however, the invaders weren’t armed forces. Nonetheless, they did not come in peace, and their attempt to enter Israel was no less an act of war than the invasions of 1967 and 1973, and the rockets that jihadists regularly shoot into Israel from Gaza. 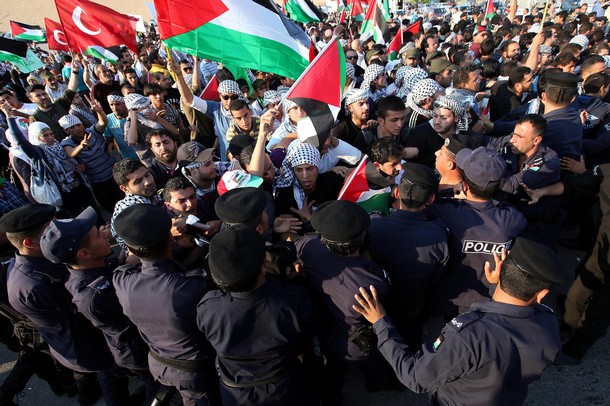 Thousands of Palestinian Arabs tried to enter the country from Lebanon, Syria, Gaza and Judea and Samaria. Their declared intention – announced weeks ago on Facebook – was to return to the lands from which they had been expelled in 1948. The Facebook page made clear the sinister intentions of Sunday’s action: it was entitled “Third Palestinian Intifada,” and after it posted numerous calls for violence against Israel, Facebook took it down – after it had gained 350,000 members.

“The leaders of these violent demonstrations,” explained Israeli Prime Minister Binyamin Netanyahu, “their struggle is not over the 1967 borders but over the very existence of Israel, which they describe as a catastrophe that must be resolved. It is important that we look with open eyes at the reality and be aware of whom we are dealing with and what we are dealing with.”

Indeed. And what they are dealing with is precisely what has been obscured, ignored, and denied, by Western governments and the mainstream media, for decades now. The Obama administration is just the latest U.S. administration to assume that Israel’s enemies can be negotiated with and placated with some agreement. The fact that every such compromise has failed never shakes this core belief, or leads policy analysts to realize that Israel is dealing with an unappeasable jihadist enemy.

No state has ever successfully reached a negotiated settlement with a jihadist enemy who avows a religious obligation to destroy it. So why is Israel constantly expected to be the first? Barack Obama and virtually everyone else in power in America and Europe assume that the violent demonstrators who breached Israel’s borders on Sunday will ultimately be pacified once a Palestinian state is set up. Yet as Hamas is now merging with the “moderates” of Fatah with whom Obama and others have been dealing, it is useful to recall that the Hamas Charter of August 1988 declares that “nothing is loftier or deeper in nationalism than waging Jihad against the enemy and confronting him when he sets foot on the land of the Muslims.” When will this Jihad end? The Hamas Charter quotes Hasan al-Banna, the founder of the Muslim Brotherhood: “Israel will rise and will remain erect until Islam eliminates it as it had eliminated its predecessors.”

In saying that “Islam” will eliminate Israel, Hamas, which identifies itself in the Charter as the Palestine chapter of the Muslim Brotherhood that is now resurgent in Egypt and elsewhere, echoes another Muslim Brotherhood document — one in which the organization vows to work in America toward “eliminating and destroying the Western civilization from within and ‘sabotaging’ its miserable house by their hands and the hands of the believers so that it is eliminated and God’s religion” — that is, Islam — “is made victorious over all other religions.”
That is a political statement (contrary to the naïve assumptions of those who dismiss anti-Sharia initiatives in various states as infringing upon religious freedom and emanating from no political necessity): it is a declaration of intent to bring Islamic law, Sharia, to America, and enforce here its codified discrimination against women and non-Muslims, and its denial of the freedom of speech and the freedom of conscience.
Yet at the same time, it is also a religious statement. The fact that those who are waging jihad warfare against both Israel and the United States believe that they are carrying out divine commands ensures that neither jihad will end with changes in economic conditions, or with a negotiated settlement. Hamas leader Khaled Meshaal has stated that “the Palestinian nation will continue its resistance despite all pressures and will not under any circumstances stop its jihad.”
That was clear on Sunday. The attempts to breach Israel’s borders were an act of jihad. The people who tried to enter Israel were not refugees who had been expelled from Israeli land. After World War II there were millions of refugees all over the world; the Palestinian Arabs are the first people in history to be granted a hereditary refugee status, passed down from father to son to grandson and great-grandson. None of the Arab states neighboring Israel except Jordan would grant these Arab refugees the right to become citizens; they opted instead to prolong the Palestinian refugee problem artificially in order to use those refugees as a stick to use to beat Israel.

The people who tried to enter Israel Sunday were Islamic supremacists bent on destroying Israel. It is good that Netanyahu understands this. It would be better still if a world that is increasingly hostile toward Israel and uncritically accepting of Palestinian jihadist propaganda were to accept it as well.

Robert Spencer is a scholar of Islamic history, theology, and law and the director of Jihad Watch. He is the author of ten books, eleven monographs, and hundreds of articles about jihad and Islamic terrorism, including the New York Times Bestsellers The Politically Incorrect Guide to Islam (and the Crusades) and The Truth About Muhammad. His latest book is The Complete Infidel’s Guide to the Koran (Regnery), and he is coauthor (with Pamela Geller) of The Post-American Presidency: The Obama Administration’s War on America (Simon and Schuster).