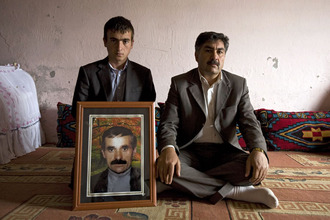 Throughout the 1980s and 1990s, thousands of civil rights activists, politicians and businesspeople suspected of having ties with the PKK were kidnapped and murdered. No one knows their exact number, and it was only in rare cases that the victims were even identified. Many corpses were dumped into wells; others were doused in acid and thrown into fields. The horror of the sight was meant to serve as a deterrent. But the majority disappeared without a trace and are still listed as missing.

One of the missing is the Kurdish construction worker Ramazan Solmaz. His wife Piroze last saw him on January 15, 1993. «He was on his way to work when they caught him,» she says. «That’s all I know. There are no traces, no clues. I’d just like to know where his body is. I just want to bury him.» Piroze and a friend have put their faith in Cizre’s bar association. «My husband, Selahattin, was shot in broad daylight in 1998 right on the street,» say her friend, who is wearing a pitch-black version of the traditional Kurdish gown. «Just like that. Like an animal.»

At the time, the women didn’t even think about filing a criminal complaint. In Cizre, confronting those in power had its consequences. The powerful included not only the soldiers and the people from Jitem, but also members of the radical-Islamic Turkish Hezbollah, a militant Kurdish organization unrelated to the Lebanese Hezbollah. The war between the Turkish army and the PKK raged in the mountains surrounding Cizre. But in the city itself, it was this group that held power over life and death. A brutal leader of this clan named Kamil Atak once let himself be nominated to become mayor. As local politicians will tell you, the former shepherd used to take pleasure in «feeding» his captives to his Hezbollah fighters.

The case of the disappeared Kurd Hasan Ergül exemplifies the vividness of these Jitem veterans’ revelations. On May 23, 1993, the farmer from the village of Cukurca got on his tractor with his three-year-old son to drive to the hospital in a nearby city. But they didn’t get far. After stopping at a nearby gas station, Ergül was surrounded by three vehicles that blocked his path. The men who got out of the car weren’t wearing uniforms. They dragged Ergül off his tractor and forced him into the back seat of one of the cars. They drove off, leaving the crying boy behind.

It would be years before Ergül’s relatives finally became aware of his ultimate fate. They learned it when they heard the confession of former Jitem member Abdülkadir Aygan, who spoke about how Ergül was strangled to death, put in a sack and dumped into a remote lake.

In the end, all the searching and inquiries of Ergül’s brothers had been in vain. But after Aygan’s confession, they did succeed in figuring out where Ergül had been dumped, where fishermen later hid his body and where his unidentified corpse had been buried in an anonymous grave not far from the lake. «Now we’re waiting for the results of a DNA test,» says Ergül’s brother Ata. «Then we will finally have some certainty.»