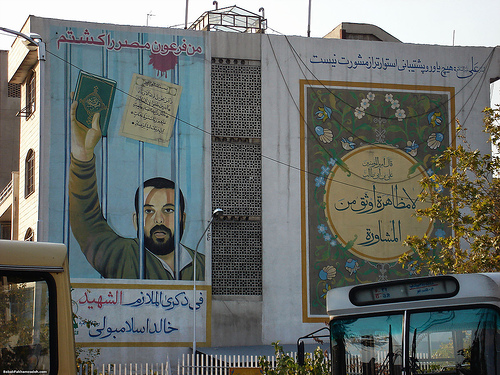 Kayhan editor Shari’atmadari wrote in Kayhan’s December 2, 2008 editorial: «…The absence of [Sadat’s assassin] the martyr Khaled Islambouli, God bless his soul, is sorely felt. Many more should follow his example.

«In a poll conducted last month by Al-Jazeera TV among wide sectors in Muslim countries, over 95 percent of respondents said that the Arab heads of states – especially Saudi King ‘Abdallah and Egyptian President Hosni Mubarak – bear the greatest responsibility for the disaster in Gaza. The question is – what were the remaining five percent [thinking]?!

«One cannot [really] expect Saudi King ‘Abdallah, who rules on behalf [of the Americans], to oppose the wishes of his American and Israeli masters or to feel sorry about the plight of the Palestinian people. Two weeks ago, during the Interfaith Dialogue Conference in New York, he raised his glass – which he [later] claimed was filled with water – and clinked it against the wine glasses of [U.S. President George] Bush and [Israeli President] Shimon Peres. [Then] he sipped from it, to show that Saudi rulers are indifferent to the massacre of Muslims in Gaza and to the catastrophic conditions in which the Palestinian people live.

«Similarly, one cannot expect Hosni Mubarak, who has on several occasions demonstrated his subservience to the Zionists, to open the Rafah crossing for the disaster-struck people of Gaza. But… have the Muslims – especially those in Egypt and the Hijaz [i.e. Saudi Arabia] – completely lost their Islamic sense of honor and their human feelings? How can the people of the Hijaz silently tolerate the humanitarian disaster and ruthless genocide of their Muslim brothers and sisters in the Gaza Strip, and accept King ‘Abdallah’s [trip] to New York to sanction this genocide? Have [they] forgotten the words of God’s Prophet [Muhammad] that one who hears the cries of a Muslim who is oppressed but does not come to his aid is not a Muslim?

«It is amazing – [even] incredible – that the Egyptian people, who are so civilized, have not lifted a finger [to oppose] the closing of the Rafah crossing and the humanitarian disaster it has precipitated in Gaza. If they rose up against [the Egyptian regime], no would dare oppose them. They should learn from the Iranian, Lebanese, and Palestinian people [how to] stand fast and resist…

«The Muslims, and especially the Egyptians, are currently protesting against Al-Azhar Sheikh Muhammad Sayyed Tantawi’s participation in the Interfaith Dialogue Conference in New York, and against his private conversations with Shimon Peres – and this protest is commendable. However, the main problem, which must not be forgotten, is that the Egyptian and Saudi regimes, along with unprincipled clerics like Tantawi, are supporting the Zionist leaders in their genocide and oppression of the people of Gaza. The Zionists’ crimes in Gaza provide every religious, legal, rational and humanitarian justification for killing them, and the Muslim masses, present in every corner of the world, can easily fulfill this divine religious duty and humanitarian mission… Since [Israelis] travel freely to other countries, they are easily targeted for punishment and vengeance.

«Some Arab heads of states – who, in the current siege of Gaza, are playing the same role as did the leaders of the heretics in the siege on the Muslims in Shi’b Abi-Talib [3] – undoubtedly deserve to share the fate of Abu Lahab, Abu Sufian and their ilk. [4] [These leaders] are threatened from two directions. Firstly, the wrath of the Muslims will sooner or later reach them; secondly, they are under threat from their American and Zionist masters…» [5]