She was prosecuted over a letter published on her website that complained Muslims were «destroying our country by imposing their ways».

It is the fifth time Ms Bardot been convicted over her controversial remarks about Islam and its followers. This is her heaviest fine so far.

The French film idol, who is 73, was not in court to hear the ruling.

The fine – equivalent to $23,000 – related to a letter she wrote in December 2006 to the then Interior Minister, Nicolas Sarkozy, which was published on her website, in which she deplored the slaughter of animals for the Muslim festival of Eid al-Adha.

She demanded that the animals be stunned before being killed.

She said she was «tired of being led by the nose by this population that is destroying us, destroying our country by imposing its acts».

In a letter to the court Ms Bardot, who is a prominent animal rights campaigner, insisted she had a right to speak up for animal welfare. 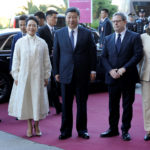