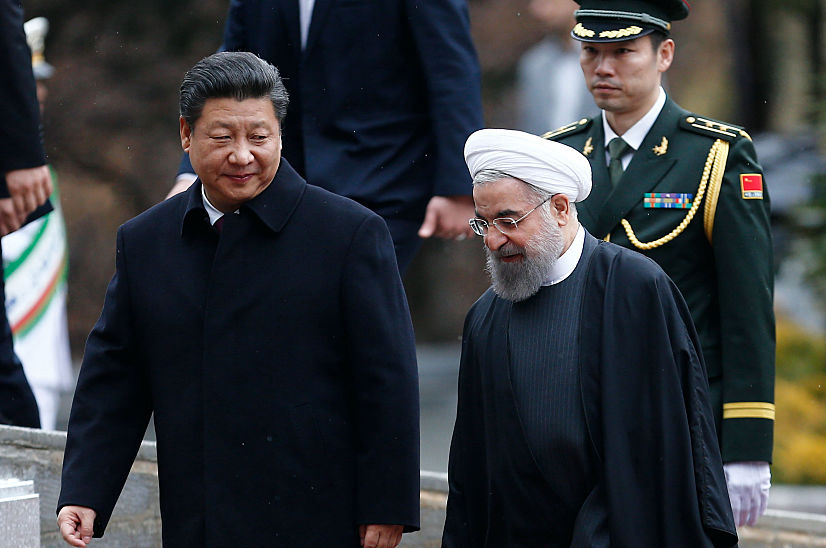 A new secret deal with China appears to be giving Beijing significant control over Iran. The ruling mullahs are selling off the country to China, just as some African governments did. Beijing appears more than happy to make deals with dictators, ignore their human rights abuses and plunder their nations to advance its own global hegemonic ambitions. Pictured: Iranian President Hassan Rouhani (right) and Chinese President Xi Jinping meet on January 23, 2016 in Tehran, Iran. (Photo by STR/AFP via Getty Images)

A slogan in which Iran’s ruling mullahs have taken pride since they came to power in 1979 is: «Neither East nor West.» The Iranian regime has long boastedabout its independence from both Western and Eastern powers. A new secret deal with China, however, appears to be giving Beijing significant control over Iran.

The 25-year secret deal, which looks like a colonial agreement, grants China significant rights over the nation’s resources. Leaked information reveals that one of its terms is that China will be investing nearly $400 billion in Iran’s oil, gas and petrochemicals industries. In return, China will get priority to bid on any new project in Iran that is linked to these sectors. China will also receive a 12% discount and it can delay payments by up to two years. China will also be able to pay in any currency it chooses. It is also estimated that, in total, China will receive discounts of nearly 32%.

Another secret element of the agreement has a military dimension: China will deploy 5,000 members of its security forces on the ground in Iran. These concessions are unprecedented in the history of the Islamic Republic. The deal is a clear win for China; the $400 billion will be invested over 25 years, which is a small amount for the second-largest economy in the world. China will also have full authority over Iran’s islands, gain access to Iran’s oil at a highly discounted rate and increase its influence and presence in almost every sector of Iranian industry, including telecommunications, energy, ports, railways, and banking. China, incidentally, is the world’s largest importer of oil.

Even some of Iran’s politicians and state-owned newspapers have begun criticizing the deal. A headline in the Iranian newspaper Arman-e Melli, for example, surprisingly criticized the government: «Iran is not Kenya or Sri Lanka (to be colonized by China).»

US Secretary of State Mike Pompeo warned countries in a speech to diplomats and business leaders at the UN Economic Commission for Africa in the Ethiopian capital, Addis Ababa, in February 2020, that they «should be wary of authoritarian regimes with empty promises. They breed corruption, dependency.» An article in the Iranian newspaper Hamdeli, by the Iranian journalist Shirzad Abdollahi, was published with the title, «Will Iran become a Chinese colony?» He warned officials:

«The smiles of the Chinese and the Russians are as harmful and destructive to Iran as Trump’s frown. The Americans are openly expressing their views, but the Chinese and the Russians are pursuing their own interests in the guise of diplomatic compliments. China, Russia, the United States, Europe, and all countries are pursuing their own national interests in relation to Iran, and romantic or hostile relations with Iran are meaningless.»

Mahmoud Ahmadi Bighash, a hardline member of Iran’s parliament, warned on a state-run TV channel that he believes «transferring full authority of Iranian islands to China» was included in the proposed agreement.

Even former Iranian President Mahmoud Ahmadinejad pointed to the danger of the deal:

«Do you own the country, while auctioning the country without the knowledge of the people? We made a revolution so that no issue would be hidden from the nation, and no one would consider themselves as the owners of the nation.»

The domestic response of outrage to the deal is being echoed across Iran. Some Iranians are comparing the deal with China to the humiliating and colonial deals made prior to the Islamic Revolution. In 1872, for instance, Iran’s ruler Nasir Al-Din Shah gave British banker Baron Julius de Reuter significant control over Persian roads, factories, extraction of resources, telegraphs, mills, and other public works in exchange for some of the revenue for 20 years. The Reuter concession was so extensive that even famous imperialists such as Lord Curzon characterizedit as «the most complete grant ever made of control of resources by any country to a foreigner.»

The ruling mullahs are selling off the country to China, just as some African governments did. Beijing appears more than happy to make deals with dictators, ignore their human rights abuses and plunder their nations to advance its own global hegemonic ambitions.