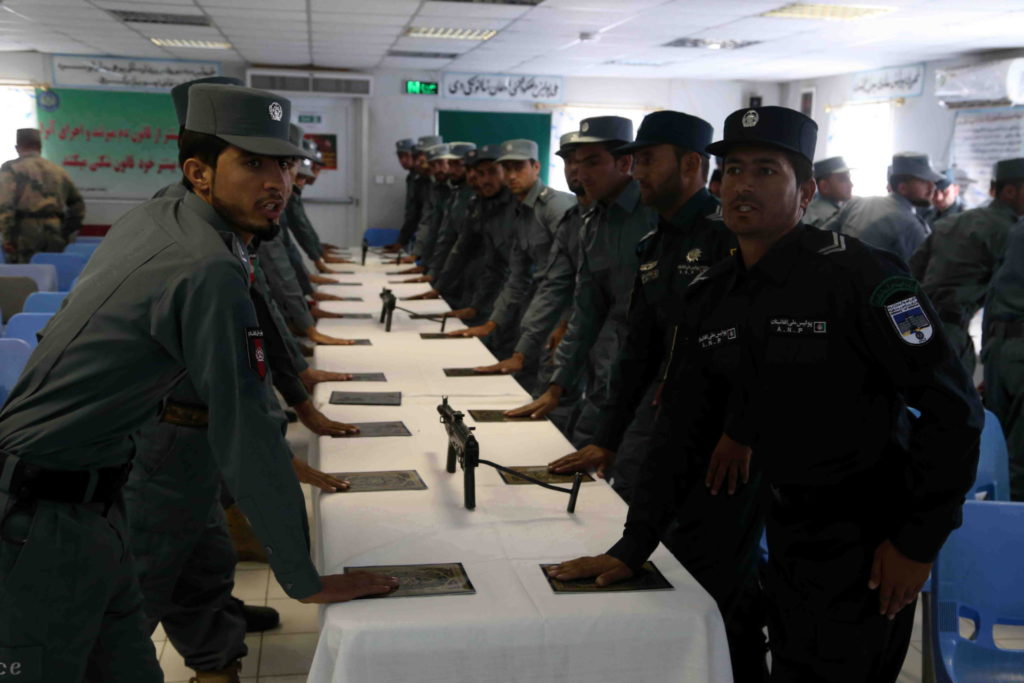 eAfghan police officials take an oath on copies of the holy Koran during their graduation ceremony in Jalalabad, Afghanistan, 02 December 2019. Some 100 Afghan police graduated from a three-month military course in police academy Jalalabad. EPA/GHULAMULLAH HABIBI/Scanpix

To borrow a phrase from Lewis Carroll, the news about the aftermath of a public Koran-burning in Kristiansand, Norway, on November 16, keeps getting curiouser and curiouser.

As explained in previous pieces here, the 30 or more police officers who were on hand at the event, which was organized by a group called Stop the Islamization of Norway (Stopp Islamiseringen av Norge – SIAN) were under secret orders from the chief of the Norwegian police, Benedicte Bjørnland, not just to douse any flaming Koran but to keep SIAN members from setting fire to a copy of the Muslim holy book in the first place. Bjørnland had maintained that the so-called «racism clause» of Norway’s criminal law gave her the power to issue such orders, while the Minister of Justice, Jøran Kallmyr, made the puzzling comment that while burning the Koran was legal, it could «become» a crime, a statement that made no more sense in Norwegian than it does in English.

To be sure, Bjørnland and Kallmyr, when confronted on a TV debate program on November 25 by politicians of the left and right as well as by a jurist, pulled back on their claims and acknowledged the primacy of free expression – although Bjørnland, apparently unable to shake off the idea that the intactness of any given copy of the Koran should be more sacred than free speech, clung to her line that the situation was «complicated.»

Nonetheless, the case seemed to be closed. Alas, not for long. Afterwards, Deputy Foreign Minister Jens Frølich Holte felt obliged to weigh in. He wrote an op-ed in which he condemned SIAN’s Koran-burning in the name of the Norwegian government and explained that whereas Norwegians do indeed have the right to say what they wish, their government also has the right to condemn what they say. The question Holte did not address in his op-ed was this: why, in a country with more than its share of newspaper op-ed pages, online news and opinion websites, and news discussion programs on TV and radio, does the government only feel obliged to refute publicly a private citizen’s point of view when that point of view concerns the topic of just one religion?

Nor was that the end of the matter. On December 4, it was reported that the Norwegian police, despite Bjørnland’s and Kallmyr’s sort-of-admission that the «racism clause» did not empower them to put out a copy of the Koran that had been set aflame by an activist — now planned, after all, to begin an «investigation» of SIAN leader Lars Thorsen the following week for violating that very statute. How did this turnaround come to take place? Well, you see, the Islamic Council of Agder (Kristiansand is located in the county of West Agder) filed charges against Thorsen, arguing that his burning of the Koran was in fact a violation of the «racism clause» because it amounted to a «hateful utterance» about Islam. Under that clause, if a court agrees with the Islamic Council, Thorsen can face up to three years in prison.

On the heels of this remarkable news came the announcement that three Norwegian Muslim organizations, in response to SIAN’s Koran burning, planned to hand out 10,000 copies of the Koran to Norwegians at stands in Oslo and, perhaps, Bergen. The idea, said Hamza Ansari, a member of the board of one of those organizations, the Oslo mosque Minhaj-ul-Quran, was to «demystify» the holy book. Another one of the organizations, the Islamic Literary Association, added that «the Koran teaches us to show love.» Which Koran, one wondered, were they talking about? Surely not the one I have read, which is full of injunctions to kill Jews and other infidels, among many other horrific mandates. Indeed, it turned out that the «Koran» in question is a 2013 translation into Norwegian that «contains explanations» intended to clarify the seventh-century text for twenty-first-century readers.

In fact, this 2013 Norwegian-language «Koran» is available online. A perusal of key passages, however, shows that it bears little or no resemblance to the actual Koran. Take this verse:

O you who believe! do not take the Jews and the Christians for friends; they are friends of each other; and whoever amongst you takes them for a friend, then surely he is one of them; surely Allah does not guide the unjust people. (5:51)

In the Norwegian «translation,» this verse reads as follows:

Is it a judgment of ignorance they want? And who is better at (judging) a judgment than Allah for a people who have the certainty of faith?

Yes, translations vary. But not this much. No way. However you cut it, these are not two renderings of the same original. Nor is this deviation from the original a one-off. Check out any bit of the Koran that makes you uncomfortable, and – presto, change-o! – the «translators» have given it a complete makeover. This one, for example:

And they [the Jews] say: Our hearts are covered. Nay, Allah has cursed them on account of their unbelief; so little it is that they believe. (2:88)

In the 2013 Norwegian version, this verse becomes:

Certainly, we gave the Scriptures to Moses and let the messengers follow in his footsteps, and We gave Jesus, the son of Mary, the clear signs and strengthened him with the Holy Ghost. Will you, then, whenever a messenger comes to you with what your souls do not desire, be overbearing? And some of them rejected you, and others tried to kill you.

One more. Consider the verse that reads as follows in a standard English translation:

Say: He who is an enemy of Gabriel, for he is surely the one who, at Allah’s command, has revealed this [Koran] to your heart, as an affirmation of what was before it, and is a guidance and joyful message for the believers.

That one, in Norwegian as in English, does not even make sense grammatically.

Apparently, then, the «Koran» from which I have drawn these excerpts is the same «Koran» that will distributed to unknowing infidels in Oslo and, yes, perhaps Bergen too. Let us hope that the word gets around that the book they are being handed is not really the Koran at all. There is an Islamic concept called taqiyya (dissimulation) – the right granted to Muslims to lie to infidels so long as they are lying in the service of the faith. Well, to judge by the excerpts I’ve looked at, this newish Norwegian «Koran» is, sadly, nothing more or less than a classic book-length example of taqiyya at its most open.

Bruce Bawer is the author of the new novel The Alhambra (Swamp Fox Editions). His book While Europe Slept (2006) was a New York Times bestseller and National Book Critics Circle Award finalist. His other books include A Place at the Table (1993), Stealing Jesus (1997), Surrender(2009), and The Victims’ Revolution (2012). A native New Yorker, he has lived in Europe since 1998.

Norway's Top Cop Seems Baffled by Free Speech - but Not by the Inviolability of the Koran - 4. desember 2019