A Project to Transform France 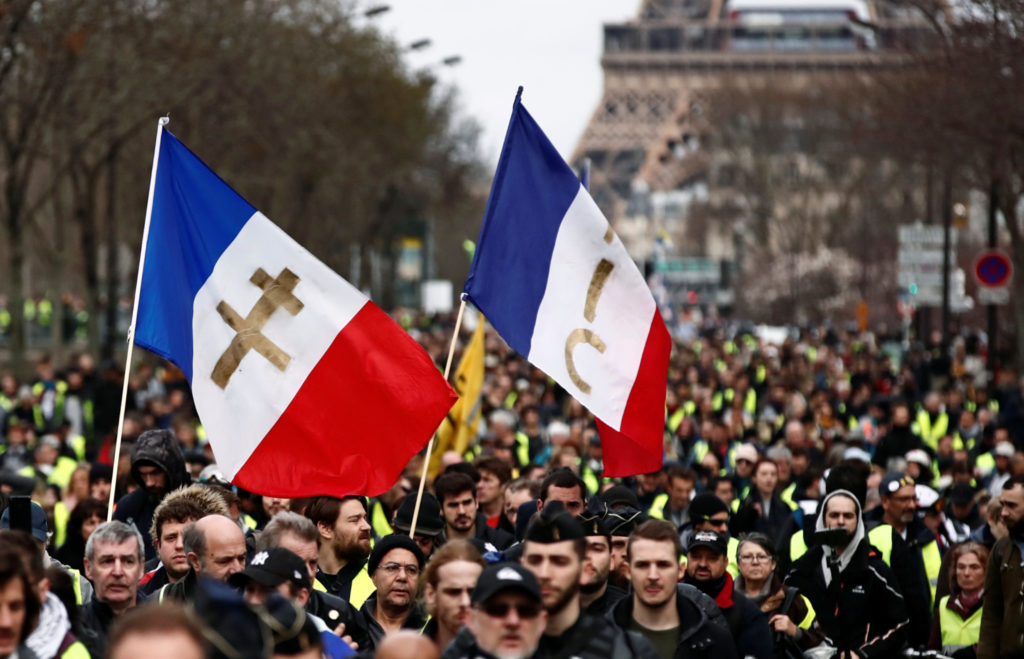 After sixteen Saturday demonstrations by the «yellow vests,» who began in November by protesting French President Emmanuel Macron’s increase in fuel prices, the controversy seems to have taken a darker turn.

That seems to have come to light on February 13, when a small group of demonstrators started hurling insults at a French Jewish philosopher, Alain Finkielkraut — who was born in and lives in Paris — after they spotted him on a sidewalk. One man, shouted, «Shut up, dirty Zionist sh*t,» «Go home to Tel Aviv,» «France is ours,» «God will punish you.» A cameraman filmed the incident, then shared the video on social networks. A scandal ensued. The «yellow vests» movement as a whole was immediately accused by the French government of anti-Semitism and «fascism».

Finkielkraut claimed that he had not been attacked as a Jew, but as a supporter of the State of Israel. He then added that the man who had insulted him did not speak like a «yellow vest» and that the words «God will punish you» is an expression from «Islamic rhetoric». Police who watched the video identified the man as a radicalized Muslim, and the next day arrested him.

In the days leading up to that incident, several anti-Semitic acts had taken place in and near Paris. The German word «juden» [Jews] was painted on the front of a Jewish bakery; swastikas were drawn with a black marker on portraits of former Jewish minister Simone Veil; trees that had been planted in memory of Ilan Halimi, a young Jew who had been kidnapped, tortured and murdered in 2006, were destroyed. Investigations have begun but nothing so far has shown any relationship between the «yellow vests» movement and any of these anti-Semitic acts. The French government nevertheless continues accusing the «yellow vests» of being at least partly to blame.

When the French government, for instance, published statistics about anti-Semitic acts committed in 2018, and noted a 74% increase from the year before, the government spokesman linked this increase to the «disorders» that have been taking place in France, implicitly meaning to the «yellow vests».

Meanwhile, in a demonstration against anti-Semitism organized for February 19 by the Socialist Party and The Republic on the Move (the party created by Macron), fourteen parties agreed to participate. Marine Le Pen’s National Rally, however, was excluded. The organizers said that as the National Rally belongs to the «extreme right», it cannot participate in a protest against the «fascist peril». Slogans included: «It’s enough», «No to hate» and «Anti-Semitism is not France». Former Presidents Nicolas Sarkozy and François Hollande took part. Prime Minister Edouard Philippe spoke of a «united France». A Muslim singer, Abd al Malik, was invited to sing the French anthem.

President Macron, during the event, was the Holocaust Memorial in Paris. The next day, he attended the annual dinner of the CRIF (Representative Council of Jewish Institutions) and gave a speech against «racist hatred». To make sure that his audience understood that he was talking about the «yellow vests», he used an expression he had used on December 31: «hate crowds».

Anti-Semitism in France has been gaining momentum. In the last 15 years, eleven Jews were murdered in France by anti-Semitic killers, often in horrific ways. In a growing number of neighborhoods, everyday life for French Jews has become unlivable. Many who have the means have left France. Many who have not left have moved to more secure areas of the country. In the last two decades, 20% of French Jews (100,000 people) have emigrated, and tens of thousands have abandoned unsafe places, such as Seine-Saint-Denis, have relocated inside France.

Some journalists observed that a decision to mobilize people against a «fascist peril» — and to unite almost all political parties while excluding the National Rally — seemed like a political trick, unfair and biased. They emphasized that most of the anti-Semitic attacks and all the murders of Jews in France came not from members of the National Rally or «fascists», but from extremist Muslims.

Also on February 19, tens of thousands of people across France demonstratedagainst anti-Semitism. Those protests would certainly seem praiseworthy — if they had no hidden agenda. Many commentators, however, seem to think that this was what was taking place.

Some community leaders stressed that the demonstration against anti-Semitism was a political operation aimed at demonizing the «yellow vests» to arouse fear of a non-existent peril in order to help Macron’s Republic on the Move party win the European elections in May.

Other people noted that holding a demonstration which excluded the right-wing National Rally party was a move aimed at diverting attention from the real anti-Semitic danger. They also suggested that political parties which support the murderers of Jews were precisely those which deny that radical Islam is a danger.

Television commentators pointed out that the government had largely ignored the «anti-Zionist» dimension of the insults addressed to Finkielkraut. They also noted that the presence among the demonstrators of parties, such as the French Communist Party, and Europe Ecology — which support terrorists who murder Jews — was a shock.

«Making the yellow vests take the blame is an act cowardice [to avoid mentioning] Islamism…. Asking people to march against anti-Semitism while cynically rejecting political parties in the name of a fantasy anti-fascism, but accepting to be at the side of parties that support killers [of Jews] is outrageous… It is Islamism that kills Jews in France. We must not forget it. Since 1945, every drop of Jewish blood that has flowed in France was shed by Islamism».

MP Meyer Habib said that, «hypocrisy reaches new heights when parties that praise terrorist killers claim to fight against anti-Semitism.» He enumerated in Parliament the list of Jews murdered in France and gave the names of their murderers, to show that all of them were radicalized Muslims. He added that the mobilization should be a mobilization against «radical Islam», not against «fascists».

In a television interview, the author Éric Zemmour defined the behavior of Macron and the government as a «masquerade of pyromaniac firefighters»:

«They claim to fight against anti-Semitism by attacking imaginary fascists, and they do it in alliance with leftists who support anti-Semitic murderers, but they do nothing against the Islamization of France, which is the main source today of anti-Semitism in France…

«Macron and the government are accelerating the rise of Islamism by each year hosting in France hundreds of thousands of Muslim immigrants who come from countries where anti-Semitism is omnipresent, and continuing to repeat blindly that Islam is a religion of peace. They actively contribute to the rise of anti-Semitism by barely denouncing Muslim anti-Semitism.»

«Macron hates the yellow vests and wants them to vanish. He wants to win European elections and he needs the Muslim vote. He knows perfectly well who the anti-Semites are today, but will not attack them. He needs them. He attacks [only] those who are dangerous to him. «

He concluded that he thinks «Macron and the government could achieve their goals in the immediate future» — meaning to defeat the yellow vests and win elections, but that the future of France looks bleak:

«Macron thinks the situation is under control. He is wrong. While he invokes fascism to smash the yellow vests and to win elections, an alliance is taking shape between the extreme left — which seeks to recruit young suburban Muslims to fight against capitalism — and Islamists, who are seeking allies to Islamize France. Macron thinks he is using Muslims; it is the artisans of Islamization who are using him.»

Zemmour also referred to the man who had insulted Finkielkraut and had shouted «France is ours»:

«Islamists have plans. They do not even hide saying it, but no one pays attention when they say it. A project of Islamic conquest is at work in France. This is what should worry the Jews.»

In a recent interview, Finkielkraut said, «If someone says: France belongs to us, that means: [to him,] France is destined to become Islamic soil.»

In a text published on November 23, 2018 on one of the main French Muslim websites, islametinfo.fr, the French Islamist preacher Elias d’Imzalene wrote:

«It is up to us to give a political meaning to the revolt. The goal is not simply to challenge an increase in taxes, but the political system that induces it… Who is more legitimate than the political Muslim — assuming his function of awakening the masses and refusing oppression — to be the vanguard of the revolt?»

A documentary film, Under a False Identity, by the journalist Zvi Yehezkeli, showed in detail how some Islamist organizations are preparing to be the «vanguard of the revolt» and using all the opportunities available to take control of France. One of the people he interviewed, a leader of the Muslim Brotherhood in France, said that the Muslim Brotherhood is gaining ground, and can count on the help of the French government, which subsidizes its activities. The man waves documents at the camera to prove what he says. The print is visible. The film was never broadcast in France.

Back to Macron’s speech at the CRIF dinner: He spoke briefly of «an anti-Semitism based on radical Islamism», but immediately — and incorrectly: as Turkish President Recep Tayyip Erdogan said, «Islam is Islam.» — defined «radical Islamism» as a «deformed religion» and not true Islam. He said just as briefly that «anti-Zionism is a form of anti-Semitism», but that he would not call for a vote on a law to condemn anti-Zionism.

He immediately added that he intends to fight against «other hatreds: hatred against Muslims, racism in all its forms, anti-LGBT racism». He said that he will ban associations that «feed hatred». He then named three associations he intends to ban as soon as possible: a very small neo-fascist group, Social Bastion, and two extremely tiny Nazi groups, Blood & Honor Hexagon and Combat 18. He did not name any leftist, anti-fascist or Islamic group, even though they are evidently responsible for much of the violence committed at the end of the demonstrations of «yellow vests» and are easily identifiable: many have websites or street addresses.

Macron stated that «the foreign policy of France is known», but he failed to elaborate. He could not very well remind a Jewish audience that France is one of the main supporters of the Palestinian Authority, or that he had «regretted» Israel’s decision to freeze the funds used by the Palestinian Authority leader Mahmoud Abbas to reward murderers of Jews and their families, or that he had worked for months with Germany and the United Kingdom to create a trade mechanismintended to help Iran’s of the mullahs, who often repeat that they intend to wipe Israel off the map.

On February 20, the fifteenth demonstration of the «yellow vests» took place in Paris without major incident. The police used a few explosive grenades but no one was hurt. There were no anti-Semitic attacks. A fully veiled woman, wearing a yellow vest on which anti-Jewish slogans were written, was asked by demonstrators to leave. She was in the company of some bearded men also wearing yellow vests. They all quietly left.

The next day, in the center of Paris, another demonstration was held. Pro-Palestinian advocates assembled to demand the release of «Palestinian political prisoners». They waved pictures of people who had been convicted of murdering Jews and were now in Israeli prisons, and signs on which were written, «Israel murders Palestinian children», «Destroy Israeli apartheid» and «Death to Israel». Macron and the French government do not seem to find the organizers of that demonstration problematic.