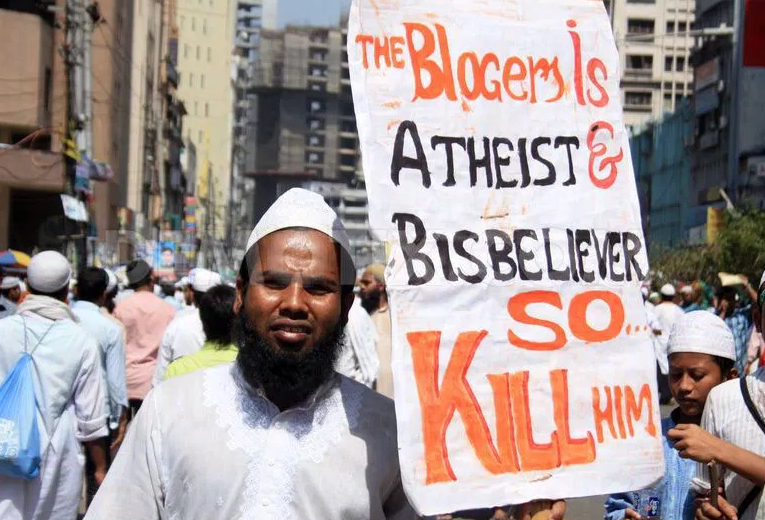 Last night, at least 84 people were murdered in the French city of Nice by a Tunisian-born Islamist terrorist, with dozens more victims wounded. The attacker drove a 19-ton truck into a large crowd of people celebrating Bastille Day, France’s national holiday, running down men, women and children over a 2km stretch of road and sidewalk.

On July 2, nine Italian citizens were butchered by Islamists in the assault at a restaurant in Dhaka, Bangladesh. They were tortured and killed with «very sharp blades» wielded by smiling terrorists who spared the life of those who knew the Quran. For almost a year already, poor Bangladeshis have been experiencing similar shocking massacres. But hose victims were not wealthy non-Muslim foreigners — they were anonymous Muslim bloggers, accused of «blasphemy» and murdered out with «sharp blades» — five victims in 2015 and a law student in 2016, as well as a Hindu priest hacked to death.

The same cycle took place in Syria and Iraq, where the beheaders of the Islamic State first targeted many Western journalists, then expelled and killed Christians in Mosul, and then landed in Paris to exterminate Western civilians.

Two weeks ago, a 13-year-old Israeli girl was stabbed to death while sleeping in her bed. As in Bangladesh, the Palestinian Arab terrorist used a knife to kill Hallel Yaffa Ariel. That is not a simple act of murder; it is a slaughter that wrongly equates building a home with murdering a child. Italian newspapers even deprived her of identity. Il Corriere della Sera, Italy’s second largest newspaper, wrote: «West Bank: 13-year-old American killed«.

What do these distorted headlines mean? That we in the West naively believe that there are two kinds of terror: «international terror» that targets Westerners in Nice, Paris, Dhaka, Raqqa or Tunisia; and «national» terror, between the Arabs and Israel, in the face of which the Israeli Jews must retreat and surrender. There is also «faceless terror,» as in Orlando, where an Afghan-American Muslim massacred 50 Americans and everybody, as usual in America, refused to name «Islam.»

It is the reaction of the appeaser, «one who feeds a crocodile, hoping it will eat him last» according to Winston Churchill. The problem is that whether you are pacifists or warmongers, gays or heterosexuals, atheists or Christians, wealthy or poor, blasphemers or devout, French or Iraqis, jihadi terrorism does not discriminate. Every one of us is a target: Islamist terrorism is genocidal.

Despite easy slogans such as «Je Suis Charlie», very few in the West showed solidarity with the French cartoonists of Charlie Hebdo. Most Europeans thought those journalists were looking for trouble and found it. Or worse, as the Financial Times’ editor said, that they were «stupid«. But after January 7 came November 13. By then, no one still blamed cartoons of Mohammed for the terrorist attacks in Paris.

While the Islamic State was enslaving and raping hundreds of Yazidi girls, our intrepid feminists in the West were very busy fighting for an Irish referendum on gay marriage. They clearly did not care about the fate of their Yazidi and Kurdish «sisters». Those victims were hidden away in the remote and exotic East, as were the murdered secular Muslim bloggers in Bangladesh.

It is time to remember the famous poem by Martin Niemöller, a German Christian pastor who was imprisoned in a concentration camp for 7 years by the German Nazi regime:

First they came for the Socialists, and I did not speak out —
Because I was not a Socialist.

Then they came for the Jews, and I did not speak out —
Because I was not a Jew.

Then they came for me — and there was no one left to speak out for me.

Similarly, when Islamist terrorists target Muslim dissident bloggers, faraway Yazidi women or Israeli girls — and they are enslaved, flogged, raped or murdered — it should concern us in the West. Islamists are just sharpening their knives on them before coming for us.

If we do not speak out today, we will be punished for our indolence tomorrow.