Politicians should stop referring to the President of the United States as «the Commander-in-Chief,» as he is often referred to. Most recently, Hillary Clinton, whom I admire, said the following about Republican senators who wrote an open letter to Iran:

«Either these senators were trying to be helpful to the Iranians or harmful to the Commander-in-Chief in the midst of high-stakes international diplomacy.»

But the president is not the Commander-in-Chief for purposes of diplomatic negotiations. This characterization mistakenly implies that President Obama — or any president — is ourCommander, and that his decisions should receive special deference. This is a misreading of our constitution, which creates a presidency that is subject to the checks and balances of co-equal branches of the government. The president is only the commander in chief of «the Army and Navy of the United States, and of the militia of the several states, when called into the actual service of the United States.» This provision was intended to assure civilian control over the military and to serve as a check on military power. 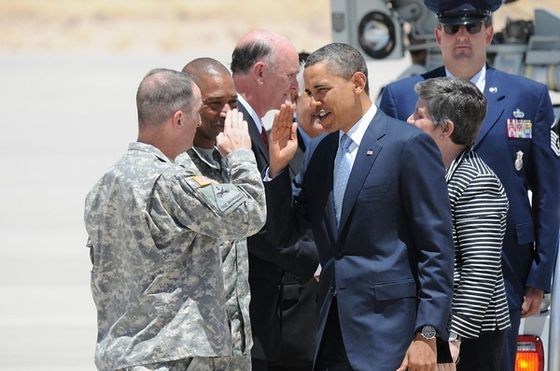 The only people he is empowered to command are soldiers, sailors and members of the militia — not ordinary citizens.

This important limitation on the president’s power is highly relevant to the current debate about Congress having the authority to check the president’s decision to make the deal that is currently being negotiated with Iran. The Constitution is clear about this. The President is not the Commander-in-Chief of our nation’s foreign policy. When he is involved in «high-stakes international diplomacy,» his involvement is not as Commander-in-Chief of our armed forces, but rather as negotiator-in-chief, whose negotiations are subject to the checks and balances of the other branches.

As President, he cannot even declare war, though he can decide how a war should be fought after Congress declares it. He cannot make a treaty without the approval of 2/3 of the Senate. He cannot appoint Ambassadors without the consent of the Senate. And he cannot terminate sanctions that were imposed by Congress, without Congress changing the law. Were he the «Commander-in-Chief» of our country — as Putin is of Russia or as Ali Khamenei is of Iran — he could simply command that all of these things be done. But our Constitution separates the powers of government — the power to command — into three co-equal branches. The armed forces are different: power is vested in one commander-in-chief.

To be sure, when politicians call our president the «Commander-in-Chief,» they are using that term rhetorically. But it is a dangerous rhetoric, because it suggests a concentration, rather than a division, of power. Military metaphors are as inappropriate in a democracy as is martial law, which does empower the executive to act as the commander of all people, but only in cases of extreme emergency.

So let’s describe the president by his actual constitutional role: the head of the executive branch of our tripod government that stands on three equal legs. As the head of the executive branch, he gets to negotiate treaties, agreements and other bilateral and multilateral deals. But Congress has a say in whether to approve what the president has negotiated.

Turning to the deal with Iran over nuclear weapons, there are sharp disagreements between the executive branch and the legislative branch over the merits of what appears to be the deal now on the table. No agreement has yet been reached, but assume, for argument’s sake, that the president negotiates a deal with which a majority of Congress fundamentally disagrees. Who gets the final word? That depends on several factors.

First, of course, is whether the deal negotiated by the president constitutes a «treaty», within the meaning of the constitution. If it does, then it requires the formal ratification of the Senate. The Obama administration has taken the position that this is merely an executive agreement and not a treaty. That of course is a knife that cuts both ways, because treaties are binding until formally revoked, whereas executive agreements can be undone by future presidents. The law is anything but clear as to what makes a bilateral or multilateral agreement a treaty, but this one has elements that are treaty-like in its content. So even if it does not formally meet the definition of a treaty, this agreement should require some form of approval by the legislative branch, particularly if it is to remain an enduring part of American foreign policy.

These important issues will be debated over the next weeks and months, but what should not be debated is the role of the president in a democracy based on the separation of powers. So let’s stop calling the head of our executive branch the «Commander-in-Chief,» and let’s stop creating the false impression that the president alone can make an enforceable and enduring deal with Iran regarding its nuclear weapons program.

President is not Commander in Chief of Foreign Policy