I believe we are seeing the beginning of the end of Jewish history in Europe.
What makes the situation in Europe unique in history is the fact that Europe has become very intolerant of identities in a multicultural and post-nationalist environment. 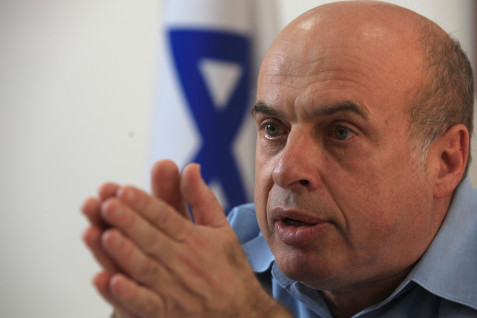 This new antisemitism is very connected to Israel — demonisation, delegitimisation and double-standards — and is now so deep in the core of European political and intellectual leaders that practically every Jew is being asked to choose between being loyal to Israel and loyal to Europe.
That insecurity is due to Muslim immigration and the rise of the classical right, which sees the Jews as the “other”.

The liberal, intellectual Europe where Jews historically felt so comfortable is now asking them to choose between Israel and “us”.
These three factors are bringing us to the situation where unprecedented numbers of Jews in the free world are moving to Israel. This year, one per cent of the French Jewish community will make aliyah.

I see this as a historical moment — as the beginning of the process of distancing Jews from Europe.
Europe is abandoning its identities, with the multicultural idea that there will be no such things as nation-states or religion. In post-identity Europe, there is less and less space for Jews for whom it is important to have both identity and freedom. In Europe, it is becoming more difficult to have both.

Aliyah from France has been rising for a number of years. Two years ago, our annual aliyah fair, which normally attracts around 500 people, was held on election day. People went to vote and then came to the fair — 5,000 attended.

The factors that contributed to this change haven’t just arisen over the past year. There has been a growing feeling of insecurity which starts to feel permanent. After the terrible incident in Toulouse (in 2012, when a gunman killed four at a Jewish school) for instance, we received appeals from the local community to help with security and we set up a special fund.

But this isn’t about just one incident. For more than 12 years, rabbis and teachers in French schools have told Jewish children not to go out in the street wearing a kippah.

That’s something that even Moscow and Kiev rabbis don’t say to children. The fact that this started in 2003 and 2004, during the Second Intifada, made people think it would be temporary. But it hasn’t changed and it’s not going to.

This feeling that insecurity is now something permanent is pushing French Jews out of France (although there is also the economic factor, which is putting pressure on all young French people, not just on Jews).

The French government does the maximum possible to protect the security of its citizens, and specifically the Jewish community.
In the past, when I was in the Israeli government and was warned that violent antisemitism was being transmitted by Hamas using French satellites, the French president was so shocked that he went to the French courts and they prohibited the broadcasts.

This helps to prevent one terrorist attack or another, but what’s happening in Europe goes much deeper than this.

Europe is abandoning its basic values of respecting identities while at the same time guaranteeing full freedom for its citizens.
On the one hand, Europe opens its gates to immigration, to people who are not asked to share its values of freedom and tolerance.
And on the other hand Europeans are rushing back towards the right-wing parties who are hostile to “the other”.

Then there is the intellectual atmosphere which asks Jews to choose between their loyalty to Israel and their loyalty to Europe.
All this creates an impossible situation for Jews. This feeling of non-belonging and disengagement is much stronger than the feeling of aliyah.
It is not our problem, frankly, but a problem for Europe and those interested in European civilisation and ensuring that European values remain. They have to question why this is happening — that so many Jews feel uncomfortable in Europe.

That more and more people are deciding to go to Israel is no doubt related to the longstanding policy of connecting every young Jew to Israel with different programmes.

Every year, we at the Jewish Agency bring in dozens of new programmes to encourage that connection. So when people decide that now is the time to leave, they already have it in mind that Israel is part of their family.
We have had to change our approach to ensure all our work is about strengthening Jewish identity and the connection to history, tradition, community and the state of Israel.
It’s all one process. If you want to have more aliyah, you must have more Jews. Where there is the choice of aliyah, people must make the free choice to be Jewish, to be connected to their community.

We cannot decide on people’s behalf where the process of strengthening their identity will stop. Some will make aliyah, some will stay in their communities, some will support Israel, some will make sure their children are bought up Jewish. It’s all part of one process. France is a good example of this process.
There has also been an increase in aliyah from certain parts of Ukraine. It’s not happening because of antisemitism or because of the Ukrainian government.
There is no antisemitic policy and the government tries to be as co-operative with the Jewish community as possible. But there is suddenly a vacuum of powerin the east of Ukraine, where thousands of Jews still live, and a lot of violence, which is not connected to the Jews but during which personal prejudices come to the surface.

We had in these places a hardcore of people who do not want to go to Israel — 80 per cent of the Jews of the former Soviet Union had already left — one million to Israel, one million to the United States, Canada, Australia, Germany and so on, and the ones who stayed are the ones who had a real attachment to their homes.

But this hardcore suddenly feels very insecure because of the violence, because of the absence of power, because of prejudice — there are people who think Jews are agents of Moscow and those who think Jews are agents of America.
There is potential danger and the immediate response was that maybe it’s time to leave.
I was there when Birthright (the group that organises educational trips to Israel for young adults) was born and was its biggest supporter in the Israei government.

Apart from the ultra-Orthodox who will keep their identities, all other Jews who don’t have that connection to Israel will assimilate. If you want your grandchildren to be Jewish, you have to have some form of connection to Israel.
That doesn’t mean Israel doesn’t have to make efforts when it comes to religious pluralism — Israel should work to be more open to all types of Jews — but it isn’t that case that Israel is imposing anything on world Jewry.

Europe was built on the idea of nation-states, freedom and equality. After the Second World War, Europe decided that nation-states were the problem because they brought the continent two wars.

An exodus of Jews from Europe would be the first visible sign of the deep changes now happening.

It is a matter of concern for me as someone who appreciates European civilisation -— but it is not my business as the chairman of the Jewish Agency.
It’s definitely the business of the leaders of Europe, who have to think how they came to the point where Europe was once willing to give away millions of its citizens — its Jews — and now when the remnants of these Jews are willing to give away Europe.

Maybe they feel they can have more Europe in Israel, because it is Israel which is fighting to be both Jewish and democratic.
Israel is the place that is fighting for European values. Europe will die here and survive in Israel.