A commentary on the Medina Quran or The riddle of Sophronius 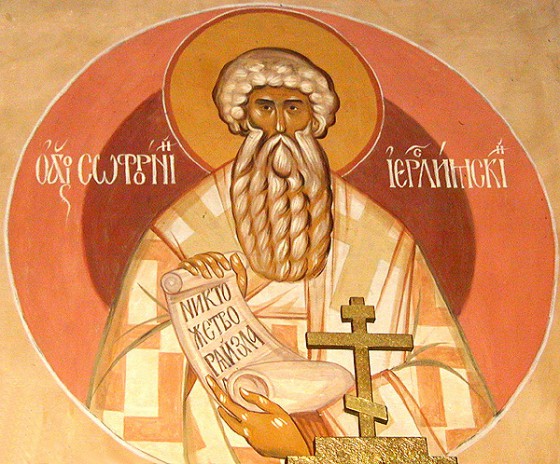 “Moreover, they are raised up more and more against us and increase their blasphemy of Christ and the church, and utter wicked blasphemies against God.”

But this is puzzling – because their blasphemy is completely at odds with what we are told about Muhammad and Islamic history.

Other writings from this era says the same, Anastasius writes [1]:

“Note well that the demons name the Saracens as their companions. And it is with reason. The latter are perhaps even worse than the demons. Indeed, the demons are frequently afraid of the mysteries of Christ, I mean his holy body …, the cross, the relics, the holy oils and many other things. But these demons of flesh trample all that is under their feet, mock it, set fire to it, destroy it….”

The history presented to us says the Muhammad told his followers he was the last of a string of Prophets sent from God. The Prophet before him was Jesus and others were mentioned – like Moses. We are also told that Muhammad supposedly said Christians and Jews should be permitted to live, while paying an extra tax.

If this is true – why are the Saracens committing blasphemy against what they should believe was the their own Prophet (Jesus) and their own God (Jahve)? This makes little sense if we are to believe Islamic history.

Early Islamic history must be incorrect.

If we accept the hypothesis in [1] – we can deduce a solution from the opposing theologies in the Quran.

What was the Medina Quran?

There are some facts we can easily accept at face value. We can accept that Muhammad existed, was a great and successful warlord and leader, conquered Arabia and that he presented a biography of his successes and his religious beliefs – the Medina Quran – perhaps 1500 verses long.

Christianity inherits some thoughts and principles from Judaism. Two are rather important – even outside religions. Those are the principles of an eye for an eye, and equality before the law.

An eye for an eye means that your punishment should be comparable in harshness to the crime you have committed. Equality before the law means equal punishment for equal crime – regardless of sex, creed, or race.

The Quran contains contains laws completely at odds with these two principles. Hacking off someones hand for stealing an apple is grossly out of proportion – and violates the eye for an eye principle.

The blasphemy verse itself breaks both principles – for a perceived crime it allows either death or banishment – two grossly different punishments. It also allows inequality before the law – imagine two people who both have confessed to blasphemy sitting before a Moslem judge. He looks at the Moslem man, and banishes him from the city. He looks at the Christian girl – and sends her to crucifixion. This violates both principles at once.

Are we not forced now to admit that there is a religion in the Medina Quran which is not of Jewish and Christian origin? A non-Abrahamic religion?

We can now find a simple answer to the riddle of the blasphemic behaviour described by Sophronius and others 1400 years ago.

Muhammad preached neither Christianity nor Judaism. His religion was completely non-Abrahamic, perhaps a local god, of his own making, or perhaps even some old Ashur or Marduk origins. Let’s call this God X.

This will easily explain why the early Saracens behaved as they did. They blasphemed another God than their own.

After some time the Saracens learned that the Jews had writings – and that they believed in a single God.

Perhaps after some time the idea that it’s the same God emerged.

Then they picked up the fact that some guy named Jesus came along, and created Christianity – yet amplifying the belief in that same single God and importantly adding the New Testament to the Canon of religious writings belonging to this God.

Is it really surprising that they went from blasphemy against Christians  to the idea that Muhammad was the next, and last Prophet of the single God of the Jews and Christians?

We suggest the hypothesis that the Medina Quran was a non-Abrahamic religion devoted to an unknown God we call X. When the Saracens later – due to honour – extended this Medina Quran they mingled opposing religions into the same book [1].

So what does this explain? It’s explains the behaviour and blasphemy from the early Saracens. It explains why there are theologies completely at odds with each other within the Quran. Oddly enough – it actually raises the dignity of Muhammad and of his Medina Quran – today utterly corrupted. He may have been far more consistent in his original sayings.

The hypothesis also makes it easier to understand the state of the Islamic world – why there are so many wildly different variations of it. Faced with shuffled chapters from two opposing theologies, the reader can pick out the religion he wants – and mix freely. In an honour culture – where personal displays of anger and violence can add to  your honour – the readers lean to the writings belonging to the unknown God X. For those in cultures with a more peaceful disposition the readers can lean towards the writings belonging to the Christian and Jewish Jahve.

Later edits of the Quran to “repair” it has undoubtedly occurred – so the Quran we have today is the result of a long process. A process probably making it impossible to reconstruct the original Medina Quran – although from a scientific point of view, it would be very interesting to identify X.

One idea might be worth mentioning here – it is suggested in [1] that the motive for inserting more text into the Medina Quran was to increase its length. Still one might wonder where the idea to mix the chapters came from. On the surface of it – it seems pretty dumb. But what if its a natural part of the Saracen thinking – simply the way it’s done.

A framing device – just like One Thousand and One Night (OTON).

The framing device in the brilliant OTON is that of a story within a story – you start one tale, then a character within the tale start to tell a new tale, and in this new tale yet another character starts a new tale – and so on. Many tales can pass before you return to continue the earlier tales.

This could suggest that the mixing of chapters was simply a completely normal framing device – just how it was always done.

Together with [2] these two hypotheses seem to have an amazing explanatory power. The behaviour of the early Saracens, their lack of knowledge about Judaism and Christianity, the formation of the Quran of today, the contradictions, repetitions, shuffling of chapters, and contradicting theologies within the Quran of today – all trivially explained. It also explains why so much external material (Sira, Hadith) is needed to explain away all this mess.

People can chose what they believe – and what they will ignore. This option is not available to scholars. Science demands that they stick to the explanations which have the most explanatory power. Will that be these simple – and almost self-evident hypotheses – or the convoluted mental gymnastics of Islamic teachings?

Hence I finish with a question – to scholars and Moslems.

Why did the early Saracens commit blasphemy against what they should know was their own Prophet (Jesus – Isa) and  God (Jahve)?

[1] Seeing Islam as Others Saw It – A Survey and Evaluation of Christian, Jewish, and Zoroastrian Writings on Early Islam, Robert G. Hoyland, 2001

[2] A commentary on the collection of the Quran to a single book,

SK is a Norwegian scholar based abroad, whose identity is known to the editor, but who for obvious reasons prefer to remain anonymous.

In his Christmas sermon of 634, Sophronius was more concerned with keeping the clergy in line with the Chalcedonian view of God, giving only the most conventional of warnings of the Muslim–Saracen advance on Palestine, commenting that the Saracens already controlled Bethlehem. Sophronius, who viewed the Muslim control of Palestine as «unwitting representatives of God’s inevitable chastisement of weak and wavering Christians»,[3] died soon after the fall of Jerusalem to the caliphUmar I in 637, but not before he had negotiated the recognition of civil and religious liberty for Christians in exchange for tribute – an agreement known as Umari Treaty. The caliph himself came to Jerusalem, and met with the patriarch at the Church of the Holy Sepulchre. Sophronius invited Umar to pray there, but Umar declined, fearing to endanger the Church’s status as a Christian temple.[4]

In 637, after the conquest of Jerusalem by Muslim armies, the Muslim caliph Umar ibn al-Khattabcame to Jerusalem and toured the city with Sophronius. During the tour of the Church of the Holy Sepulchre, the time for Muslim prayer came, and despite Sophronius’s offer to Umar to pray inside the Church, Umar chose to pray outside. The caliph’s reason for declining to pray there was because in the future Muslims might say that Umar prayed here and use it as an excuse to build a mosque there. Therefore Muslims are not allowed to build a mosque there. So appreciating the caliph’s intelligence he gave the keys of the church to him.[citation needed] Unable to refuse it the caliph gave it to a family of Muslims from Medina and asked them to open the church and close it; the keys of the Church of the Holy Sepulchre still remain with the Muslim family.

Toward the end of his life, St Sophronius and his flock lived through a two year siege of Jerusalem by the Moslems. Worn down by hunger, the Christians finally agreed to open the city gates, on the condition that the enemy spare the holy places. But this condition was not fulfilled, and St Sophronius died in grief over the desecration of the Christian holy places.