The leading jihadist commander Mokhtar Belmokhtar — also known as Khalid Abu Al-Abbas, and by his nickname «Al-A’war» («the one-eyed») — is hiding in Libya. From there, according to security sources quoted in media reports, he is planning to mastermind terrorist attacks against Westerners and their interests across Africa’s Sahel region.

Belmokhtar, born in Algeria in 1972, and an Algerian citizen, was a key member of Al-Qaeda in the Islamic Maghreb [AQIM]. After an internal power struggle, he decided in December 2012 to form a new group, known as the Signatories in Blood. 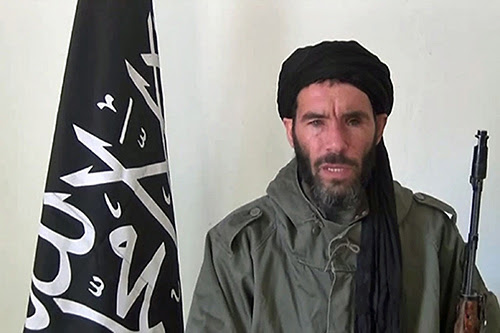 On January 16, 2013, armed with AK-47s and rocket-propelled grenade launchers, he led an attack against a Western-owned gas processing facility of In Amenas, Algeria. In the four-day siege of the complex, 39 hostages — including U.S. citizens Frederick Buttacio, Victor Lynn Lovelady, and Gordon Lee Rowan — were killed. After the assault, the U.S. State Department put a $5 million bounty on Belmokhtar.

As a former Algerian soldier with experience from training camps in Afghanistan, and as a member of the Armed Islamic Group [GIA] in Algeria, he rose quickly to the high rank of «emir» (commander). Later, he was one of the co-founders of the Salafist Group for Preaching and Combat (GSPC), which evolved into AQIM.

As a commander in AQIM, Belmokhtar conducted kidnapping operations against Westerners. Later, while in the north of Mali, fighting against Western and African military intervention in the area, he established his own group.

Although his career as a terrorist seemed to have come to an end when, in March 2013, the Chadian government announced that he had been killed in combat in Mali, U.S. intelligence and military officials were wary of confirming Belmokhtar’s death.

In an interview to the Libyan press agency LANA, Malian President Boubaker Keita said that Belmokhtar represents a menace for the region. «If this news [that he is still alive] is true,» he said, «we are under a serious threat. Belmokhtar is a very dangerous figure. I am sorry that he was not killed in my country as previously announced and that he managed to move to Libya. There is not going to be peace in the whole region of the Sahara as long as he is alive.»

The news that he managed to escape a huge manhunt staged by the international military forces in the Sahel is doubtless helping to build him into a legend and attracting more young people to jihadism.

In addition, Libya is undergoing a period of uncertainty and weakness. The country is in a political vacuum and unable to pursue a war against terrorism. After gunmen recently attempted to attack family members of Libya’s interim Prime Minister, Abdullah Al-Thani, he handed in his resignation.

The Egyptian media outlet Al-Ahram Weekly wrote that leaked reports linked the attack to pressure exerted on Al-Thani’s choice of members of his cabinet. According to the article, the pressure on the former PM was to appoint certain people as Ministers of Defense, Interior and Finance, in addition to the Head of Intelligence.

One thing is certain: Belmokhtar will try to take the maximum advantage of the present Libyan instability. He knows the ground well and can rely on a local network of support.

Belmokhtar also reportedly spent several months in Libya in 2011 and received logistical aid from Islamists in Libya for the attack against the gas plant in Algeria.

Belmokhtar’s presence in Libya is not only alarming — more than anything it is a testimony that the country is becoming a safe haven for Islamist terrorists. Libya is, in fact, the new jihadist front on the Mediterranean — and just few hours away from the centers of Europe.