«You don’t expect it to happen when he’s in the UK,» said his wife, Rebecca. «You think they’re safe.»

Mrs Rigby, who described the Royal Fusiliers drummer as a devoted father to their two-year-old son, Jack, added: «His proudest moments were serving in London on the ceremonials with the drum corps.»

The fusilier’s stepfather, Ian, said: «When in Afghanistan, you come to terms with it, you know it’s dangerous. You don’t expect something like that on your doorstep. It’s very difficult.»

Rigby, from Langley, in Middleton, Greater Manchester, served with 2nd Battalion, The Royal Regiment of Fusiliers, and was attached to the regimental recruiting team when he was hacked to death in broad daylight on Wednesday afternoon in Woolwich, south-east London.

«I love Lee and always will,» Mrs Rigby told a press conference at the regimental HQ of his unit in Bury on Friday. «I am proud to be his wife and he was due to come up this weekend so we could continue our future together as a family.»

Ian Rigby read out a statement on behalf of the family, which painted a portrait of a young man who had fulfilled his ambition of joining the army and who also drew immense satisfaction and pleasure from his family.

«What can we say about Lee, our hero?» it began. «When Lee was born the family adored him, he was a precious gift given to us.»

That said, the family recalled, he was not always the easiest of teenagers. «Lee had a fiery temper when he was younger: I used to sit on him to calm him down till he got too big at 15, then he used to sit on me,» his stepfather said.

«Lee’s dream growing up was always to join the army which he succeeded in doing, he was dedicated and loved his job. Lee adored and cared a lot for his family; he was very much a family man, looking out for his wife, young son, Jack, younger sisters – who in turn they looked up to him. He always had a banter with them but would never ever let any harm come to them.»

The stepfather, who struggled at times to contain his emotions, said Rigby was a «man who loved people» and who «believed life was for living».

He added: «Courtney and Amy, his younger sisters, wrote this for Lee: ‘Rest in peace Lee, we loved you so much, you didn’t deserve this. You fought for your country and did it well. You will always be our hero we are just upset you left us so early. Love you Lee. Goodnight.'» 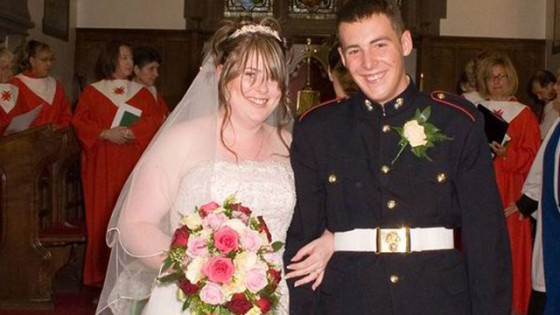 The last text Rigby had sent to his mother, he said, read: «Goodnight mum, I hope you had a fantastic day today because you are the most fantastic and one-in-a million mum that anyone could ever wish for. Thank you for supporting me all these years, you’re not just my mum you’re my best friend. So goodnight, love you loads.»

It was now the family’s turn to say goodbye, he said. «We would like to say goodnight, Lee. Rest in peace, our fallen soldier, we love you loads and words cannot describe how loved and sadly missed you will be.

«We would like to thank everybody, the police and army for the amazing support we have received and for all the goodwill wishes we are receiving from all over the country in memory of Lee. Our hearts have been ripped apart from us, everyone is struggling to cope with this tragedy, so we would ask the press to respect our privacy to grieve our son’s parting as we try to come to terms with this.»

He then read out a poem, a tribute to Lee from an unknown poster on a Facebook page. It read:

You fought bravely and with honour died,
You leave your family so full of pride,
Sleep well young soldier, your job is done,
Your war is over, your battle won.
Our family chain is broken and nothing is the same,
But as God takes us one by one,
Our chain will link again.