The University of Potsdam, located near Berlin, triggered sharp criticism from German academics this week because of its joint academic program with the University of Religions and Denominations, located in Qom, Iran.

The cooperation agreement between Potsdam and the Qom-based university was a way for Iran’s regime to advance its Islamic doctrine and carry forward the “polices of the totalitarian dictator of the Islamic Republic of Iran,” Dr. Wahied Wahdat-Hagh, a prominent German-Iranian scholar in the Federal Republic, told The Jerusalem Post on Wednesday. He warned of the use of Iranian academics to engage in espionage work in Germany.

The former director of the institute of religion and Jewish studies, Karl E. Grözinger, wrote a letter to the university’s management, expressing his “great concern” about the cooperation, according to the Potsdamer Neuste Nachrichten newspaper.

In response to the criticism of the URD-Potsdam academic program, Dr. Johan Hafner, who is coordinating the program with URD, wrote the Post, “We are aware of the lack of religious freedom and the doctrinaire influences in Iran, and consider an academic exchange with qualified intellectuals to be possible.”

Hafner, who is a professor of religion at the University of Potsdam, added that “we expect from the dialogue with Muslim colleges a critical reflection…and we will pay very close attention that intellectual exchange with Jewish scholars is possible.”

In response to Hafner’s comments, Wahdat-Hagh told the Post that the University of Potsdam stresses that the program is merely an academic exchange. “But what is overlooked is that the URD follows the totalitarian and anti-Semitic state doctrine. How can one work with an institute that spreads hate propaganda against the Bahai religion and the State of Israel, as well as defends the forced veiling of women.”

Wahdat-Hagh said the URD was simply not a religious institute. 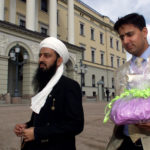