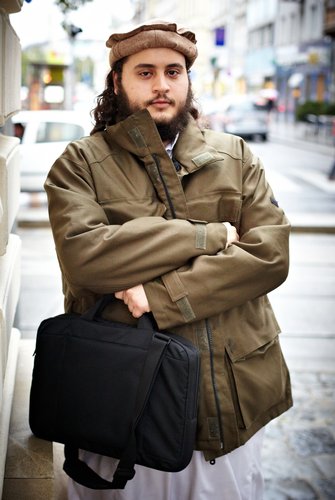 “I want to send the message that I am ready to die for my religion any time,” he said in an interview last month, his first since his release. “I have nothing to lose in life. Today I know that demonstrations and protests don’t help, and today I know that the West is lying about its freedom of speech and human rights.”

“Mahmoud’s aggressive re-entry into the jihadi mediasphere has garnered him significant attention among German-language jihadi adherents,” said Jarret Brachman, author of “Global Jihadism: Theory and Practice” and a consultant to the United States government on terrorism. “They seem to be smitten with his fiery lectures and are responding to the street cred he gained from his time in prison.”

Out of prison, Mr. Mahmoud is now preparing to settle down in Berlin and has started a new group, called Millatu-Ibrahim, whose goals, he said, would be to “preach the word of Allah, fight for the better treatment and release of especially female Islamist prisoners.” He has already secured prominent supporters like Abou Maleeq, the former rapper “Deso Dogg.”

Arab, European and United States intelligence and counterterrorism officials say that Mr. Mahmoud is a known figure in the international jihadist scene. He had connections to Atiyah Abd al-Rahman, who after Osama bin Laden’s death was briefly Al Qaeda’s second-ranking official until he was killed in August.

For years Mr. Mahmoud was one of the leaders of the Global Islamic Media Front, which translated into German videos and messages of Al Qaeda and its affiliated groups. “I did it to support the mujahedeen,” he said. “We were like a media organization; we just wanted to give people the opportunity to hear the words of the mujahedeen.”

His importance to jihadist networks became clear in April 2008, when Al Qaeda’s affiliate in North Africa called for his release from jail in Austria, in exchange for freeing two Austrian captives.

Intelligence officials say Mr. Mahmoud also has ties to militants who kidnap Westerners, including the British journalist Alan Johnston, who was held captive in Gaza for four months. He was also accused of having played a role in the kidnapping of a German woman and her son in Iraq. She was released, but the son’s fate is unknown.

This led to clashes with his father, no stranger to militancy himself, according to security officials who say the father had been active in the Egyptian group Gamaa al-Islamiya. Ultimately, the father publicly denounced his son’s views.

“I do respect my parents, but it is clear that we are two different generations,” Mr. Mahmoud said. “His generation is more afraid, and they only used to speak about an Islamic state, but my generation, we don’t want to speak; we want to do it.”

In October 2002, when he was 17, Mr. Mahmoud said goodbye to his parents as he left for school one day in Austria. He was gone for eight months, heading south through Italy to Iraq, investigators say, where he was trained in a camp by Ansar al-Islam, a group that was responsible for many suicide attacks. “I was arrested two months before the war in Iraq started,” he said.

American and Arab intelligence services already had Mr. Mahmoud on their radar because he had studied with Hassan Mustafa Osama Nasr, an imam in Milan better known as Abu Omar.

Back in Austria by the end of 2006, Mr. Mahmoud had become a head of the media group, working with others, including his former wife, to translate videos and texts from Arabic into German.

In 2007, the authorities said, they became alarmed when Mr. Mahmoud started to buy ingredients for a possible suicide belt and the Media Front published a video threatening to carry out attacks in Germany and Austria if they did not withdraw their troops from Afghanistan.

On Sept. 12, 2007, Mr. Mahmoud and his wife were arrested in Vienna. He denied that he had anything to do with the production of the video or that he had any plans for a suicide attack.